He mentions that inside the the blood stream of those vaccinated is a MCST chip, which is a type of microprocessor. tracking the data while connected into the base station via 5G technology.

The details he says is available includes:
As to if he directly connected into the MCST chip, or a database that the MCST chip reports its data to, I'm not sure, but that's not to important.

As to it's authenticity, who knows, as it's easy to fake what we saw in the video. However, these small chips to exist and it is possible this is going on, whether the person is telling the truth or not.

The Smallest-Ever Injectable Chip Hints at a New Cybernetic Medicine
Electronics are getting imperceptibly small, opening new avenues for medical technology to place advanced monitoring and treatment devices inside our bodies. And Columbia University engineers just demonstrated a new and revolutionary version of this, creating the world's smallest single-chip system ever developed, according to a recent study published in the journal Science Advances.

And, critically, the tiny new chip can be implanted via a hypodermic needle to measure internal body temperature, and potentially much more.


A tiny computer chip was implanted into seven mice at once 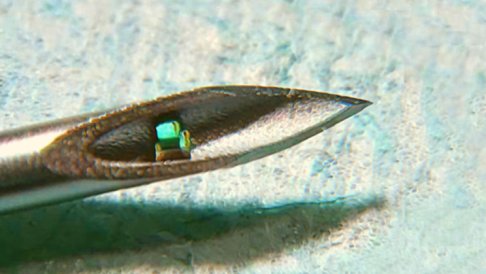 ​
"The implant created by the engineers at Columbia is record-breakingly small, but it's also breaking new ground in simply existing as a wholly functional, electronic circuit whose total volume is less than 0.1 cubic millimeter. In other words, it's the size of a dust mite, not to mention far more compact than the world's smallest computer, which is a cube-shaped device precisely 0.01-inches (0.3 mm) on each side. The smaller, new chip is only visible with a microscope, and pushed the envelope in power-sourcing and communications ingenuity design."​
https://interestingengineering.com/smallest-ever-injectable-chip-hints-at-cybernetic-medicine​
Social Media: Facebook | Telegram Channel | MeWe
My OBE Course: consciousness.life | My Services: laron.nz
Reactions: Margie and Lila