​
All the processes and attempts to modify the economic structure of our society that we outlined in the series of five articles a few weeks ago are still going on. The RIC and CS have not yet achieved their objectives, partly because our Higher Selves dismantled a large number of systems in the mental and etheric frameworks, and partly because the economies of the different countries have not stopped as much as they would have liked to have greater maneuvering margin and be able to implement more easily the changes that we had explained. This makes them keep trying, and the energy put into sustaining the issue of the pandemic is not diminished, but rather increased at times, making the exit of this "hologram" slower and more complex than it would naturally be thru "wear" and natural dissolution of to the forces and dynamics that form it.

This indicates, perhaps, because there are several simultaneous scenarios with different degrees of impact and potential to manifest, that there are still months before a “complete” end to this issue is actually seen, and that there is much uncertainty ahead as to how they will force the economic adjustments they have planned, because if they let this moment pass without achieving it, it will take years to recreate another type of global situation so enormous as to be able to implant it again. So, for now, we have no choice but to monitor how things evolve and have patience, to see what movements and actions are executed by the RIC and CS in order to move the entire economy towards digitized systems and with a blockchain structure as we had said. The first step, or one of them, is almost complete, as China is already about to launch its digital currency, which they have been working on for almost five years, and which has seen the green light these weeks to be gradually activated, becoming the first currency that will be, in the future, a “crypto-yuan” in parallel with the Chinese “paper” national currency.

Once it is up and running, and the Chinese economy supported partially or totally by a 100% digital currency, it is a matter of time, taking more or less years, that the rest of the world's national currencies will move towards “crypto” technology to not to be left behind regarding the potential for the Chinese economy for moving outside the control of the American sphere of payments, the SWIFT system and all the western mechanisms of economic control and management. Thus, at the geopolitical level is simply a "power struggle" between politicians and countries, at the RIC and CS level is one more step to control all the financial systems of humanity and with it the energy generation systems that derive of them and that we already know.

It is also possible that, next year, they will begin to commercialize vaccines against covid-19, because if they get it this year they will lose part of the power of fear that continues in society, since people who feel protected by the vaccine will no longer have any qualms about continuing to lead a “normal” life and putting all of society “back on track”, which again hinders the RIC's plans to stop everything until they have managed to assemble and activate all the necessary control systems for the following phases of their plans. As you will also be realizing, dozens of apps are being created to control who you meet and who you don't, where you are and when, and everything else, with the excuse of notifying you if you are around someone infected by Covid-19 or you have been in contact with someone infected by it. It is still another system for monitoring the world population on a huge scale. In some countries like Spain there is still no consensus on which app to use or how, but countries like India impose fines and you can be left without a job if you do not have the monitoring app for your contacts on your mobile, geo-located constantly and with Bluetooth activated for it to work, with what looks like it will become mandatory in many places. On the MIT Technology Review website they have created a list of all the apps that are currently available and where they are being used and which countries have implemented which one. In Iceland, already 40% of the population, according to data, is being monitored "voluntarily" in this way. We will see how it evolves. As someone said, George Orwell wrote 1984 as a novel, not as an instruction manual. 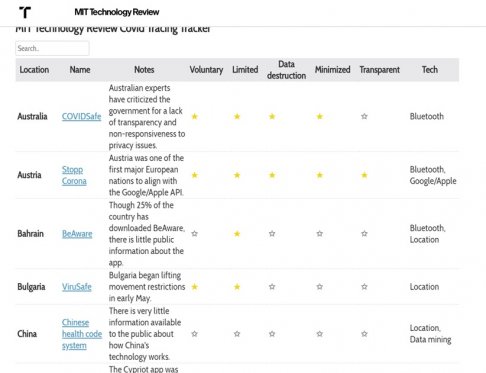 Partial screenshot of the list of apps that are being implemented to record the movement of the population and their contacts - MIT Technology Review​
In any case, sooner or later everything will return to “normality” when the RIC achieves their objectives, even when a second wave of the pandemic arrives for it, since it remains to be seen if that scenario is the one that ends up falling with more consistency. There are forces of nature and planetary hierarchies working endlessly to dismantle it, while all the resources of the RIC are put into manifesting it. A real fight to which we will try to contribute by supporting with our Higher Selves the elimination of everything that can be eliminated, so that no other wave ends up manifesting itself or is as brief as possible.

The request to collaborate with it, to our Higher Selves, is the following:


I request to my Higher Self and I give permanent permission to erase, delete, cancel and dissolve all mental, etheric and physical-energetic scenarios related to the so-called "pandemic" caused by Covid-19. I request and give permanent permission for assistance to hierarchies, forces and groups that work for the greater good of the planet, flora and fauna and that assist humanity and all beings that inhabit the Earth as part of the hierarchies that operate under orders of our planetary logos. I request and give permanent permission to erase all possible frames of the sacred plot of humanity that are not in accordance with the greater good of it, that are being created and forced by the forces and members of the different races that manage the life system on the planet under the Asimoss leadership, and by those human beings who belong to the so-called "control system". I request and give permanent permission to intervene and try to reduce the potential and actions of the Asimoss and subordinates against the economic, energy, social structures, etc., that govern the evolutionary path of humanity, and to destroy and erase again what they rebuild and re-launch every time we try to slow down or block their plans, actions, and octaves. I request and give permanent permission to separate as much as possible the personal sacred plots of each human being who executes this request from the most negative lanes and scenarios associated with the “Covid-19 pandemic,” minimizing as far as possible the repercussions and effects that this global manipulation has on the individual realities of humanity. I request and give permanent permission to try to move the evolutionary lane of timeline 33 where most of humanity is located to scenarios more in line with its greater good and to block the Asimoss’ attempts to anchor this evolutionary lane to contrary scenarios. I request and give permanent permission to make the changes to my own sacred plot and evolutionary lane to take me as far as possible from the most negative repercussions of this global situation we are experiencing, intensifying the aid to move me to higher levels from the timeline in which I am. Thank you.​
We are going to see how this situation continues to develop and we hope that, with this petition, we will contribute to making things much more difficult for the RIC, that all energy and “pandemic” scenarios will dissipate without achieving their objectives and, therefore, not having a choice but to let it run because of the impossibility of manifesting them once society has recovered and "starts" its "normal" operating engines again. This last point is very important, we have to do everything possible to get our lives and activities going again, only this can stop current attempts to stop everything until the RIC gets what they want. There are many restrictions in place in all the countries of the planet, but, within the margins that each one has wherever he lives, we must go back to “living” and recover our personal and social dynamics as soon as possible.

About the Author
David Topi is an engineer, multifaceted writer, trainer and therapist. One of his main areas of focus is educating and helping people through spiritual and personal processes. He is an energy healer and uses the “Akashic” healing technique. He is trained in metaphysics, alternative methods, inherent spiritual abilities and in personal deployment systems that allow humans to express their maximum potential and find answers for their questions. Back in 2013 he created EMEDT, Metaphysics and Transpersonal Deployment School, to provide a framework, organised and structured to the training he teaches. The website for David Topi's Spanish based Metaphysics and Transpersonal Deployment School can be found here, http://emedt.org. David Topi's home page can be found here, http://www.davidtopi.com(Spanish).
Reactions: Lila, Manuel and Pucksterguy

George Orwell wrote 1984 as a novel, not as an instruction manual
Click to expand...