Article Through the Eye of a Needle: Nine's Path Pleiadian Tarot (1 Viewer)

Summary: Emerging from a period of dazed disequilibrium, or merely working through sense-making exercises foisted into your hands by circumstance, this now-moment affords you an opportunity. Neither choice nor habit will guarantee a rightful passage through the tight fold of temporal ambiguity now garnering your attention. What you’re playing with has more the sense of magnetic push and pull, rather than solid this or that, at its core. You fare better with such a dynamic by trusting the laws of nature and acknowledging your place within the spectrum of light: that is, to let go of all but the least thread that connects you to your awareness of self and resting in the nature of the greater self that has you always within its perfection. Alignment, not the mental dissection of parameters of choice, may well open to you the full potential of a reality you’re just coming into awareness of. 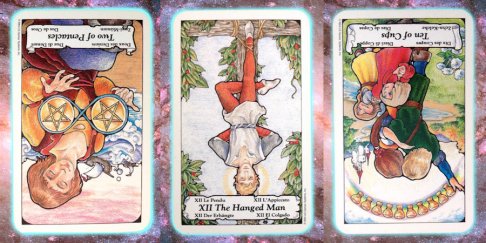 What to do, what to do? You have options, yes, but maybe too many. Or not enough, when you look at the hard reality of things. Right now, if you have taken the signal from the cosmos and given yourself a period of rest, you could be feeling a shift in baseline energies. Pause before you act. This isn’t like it has ever been before. Though the difference may be subtle, acknowledge the altered terrain around you. What has been is no more, solid and true having been swept away in a gush of cleansing turbulence. Cleansing, yes, though it may seem like a mess out there. Let it be. What matters is the terrain within, and that has new promise threading through it. Connect there and let what’s going on do its thing. Whatever you do, keep in mind that the game has shifted into a new phase of operations. You are no longer who you were when you started. You’ve gone through countless iterations of self-expression since then. Why, then, should you continue actions that took form in bygone ages? As the shift begins in subtle variations, like mutations in the matrix code, you need to bring your subtle senses online fully. No more moving by rote, saying meaningless phrases that have found a home in your voice, or acting in reaction rather than response. Time is alive, and you are coming back to life yourself, from a dormancy of an aspect of awareness that beckons your exploration. Settle into the joy of that thought, and let it pulsate through the moments that mark your days.

One thing that becomes evident when you have been suspended in a seeming unreality is that sense can be made of even the most irreconcilable of details. All you need to do is wait long enough for the data to stream in, and adjust to an alternate perspective. You need not fear losing yourself if you maintain situational awareness. Time shifts and reality restructuring incur necessary and inevitable periods of chaos. Perhaps this has already spun you around to the point of not knowing which way is up. Set that thought aside and center. Within the span of cosmic geometries, there is no up, no down. Only in or out exist, regarding navigational aesthetics. Either you are moving closer to the truth or further away from it, closer to God or further from love-source. These are merely aesthetic terms for perspective. You know, or perhaps believe, or maybe only repeat to yourself for comfort as you peel away layers of distortion, that truth, love, and perfection exist within everything. Can you be separate from what you intrinsically are? Be the love, nourish your divine presence, acknowledge the perfection inherent in what leans on time to reveal its secrets. Standing at a right angle to the core issue of creative endeavor may afford you some insight. In gaining an appreciation for what seems lost to all logic, you can in fact adjust your personal lens to align yourself. That doesn’t mean you lose your footing, if you can remember it’s all merely part of a bigger, more perfect thing.

While it can be tiring to defer a happy resolution ad infinitum, remember that you are treading through fields that had been locked and lain fallow for some time. Would you really, truly be happy in settling into the way things have always been? You’re wiser now than you were, having found the balance point between competing polarities, and not been obliterated by the collision of worlds. Well, perhaps you have suffered the uniquely exquisite ordeal of inner change. It may be that you have grieved the loss of some aspect of yourself as you buried all meaning and form of identity. Lineages of time invisible to your mind have carried your grief to the furthest end of possibility. There, the relinquishment of all you have considered yourself to be has been met with celebration, for it marks the crux of a magnificent design of meaning. A rite of passage awaits, ministered by ancestry so intricately spanning the web of life that you can hardly deny the feeling of integration with All That Is. Alignment with what awaits your discovery reveals what choice cannot. Let your choice be to find the point of imperturbable balance, of equanimity, poise, and joy. This is the passage through the needle’s eye that love draws you through. All that you are is about to reveal panoramically what you have been unable to see from where you have been. It may be necessary to wipe the slate clean, or only to clear your mind from what populates the scene. Settle and sense the subtle dynamics at work.

“As the sun set on his career, it dawned on his dreams, and as he awoke, and released the bonds of sleep, he aligned himself with the harmonic of love of himself and began to understand that he did indeed have a greater purpose in life than he had previously allowed himself to believe. In the moment in which he breathed in this realization, he entered into a new reality.”

Love
In the moment in which you forgive yourself for being human, you become more fully human, and more divine.
https://ninespath.com
Reactions: Tristan, Manuel and Linda
OP

How interesting! Mar 22, the date of this post, was about the date I had my bridge dream I posted here. The bridge was narrow, the width was only enough for one person.
"When you censor a person you do not prove him a liar, you prove you fear what he has to say."
Reactions: Lila
You must log in or register to reply here.
Share:
Facebook Reddit Pinterest Tumblr WhatsApp Email Link