Summary: From the raw material of self have you carved away the excesses of the matrix to reveal the divine truth that you are. What you have carried inside is preparing to emerge, as you meet the destined point of self-revelation. As with you, so with others; remain focused and undeterred by whatever chaos spills over as the pressure of enforced being is released. Allow dense barrages of discord to pass through you as if through a spectre. Indeed, you are not who you were. Liberation, revelation, and remembrance are at hand.

The Emperor — Five of Rods (reversed) — The Star 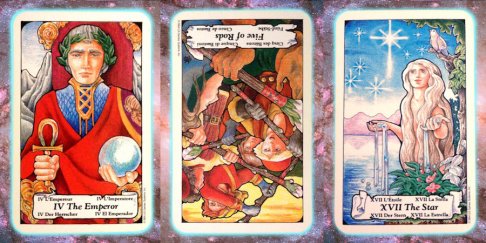 Logic and structure have provided a firm foundation from which to launch your dreams. More and more, you’re becoming aware of just how much you’ve done to give that to yourself. Despite, or maybe because of, what you’ve been given to work with, you diligently made progress with the project of self-creation to the point of recognizing emergent greatness. The best part of actually arriving there is feeling so at home in that state that you don’t even waver. Gone are the struggles with the ego’s pointed efforts for recognition, lost are the threads that tied you to higher mental sovereignty. You’ve reached it. If you are the only one who recognizes it in yourself, really that’s all you need. After all, others are also pulling themselves into position for emergent greatness, and they need to remain focused on the job of doing what they are here to do. In the new light, see what you have carved from the raw material around you. Sure, there will be outcroppings that still call for tooling down; there are always going to be some rough patches to chisel into shape. However, you hold in your hand the artifact of your soul’s work, which you have carved into such a state of perfection that it is achieving a phase shift of its own. Hold it with grace, knowing you have mastered the use of your energy to the point of readiness for a new revelation.

In the test of your mettle, how do you fare? Do you succumb to rivalry, chaos, or degradation of spirit? Or do you acknowledge that life can get messy in the best of circumstances, and hold your ground? The latter, obviously, is the preferable method for dealing with unexpected chaotic ramblings in whatever form they visit you with. “This, too, shall pass” may prove a helpful mantra for dealing with the inevitable uprisings of turbulence that mark this point of time. Such is the nature of release that conflict can bubble over with escaping pressure. If this is what you witness, keep in mind that the longer pressure is held down, the more explosive it becomes. Watch what happens with that in the background, and allow your thoughts to descend like a cooling shift in the breeze. Let your own participation in the melee of change be fluid and detached right now. Let potentized words pass through you as if through a ghost, and thus remain whole in your own right. You are in the midst of phase shift, as you pass from one mode of being to another. The same is true for everyone, or soon will be. The sure footing in familiar ground is shifting as you read these words. With tempers at the boiling point, be wise. Reflect on what you’ve learned, and breathe easy in your own space.

MOST OMWARD DIRECTION: The Star

Where you’re going, you don’t need any baggage. No extras are required. The bare essentials are, for you, your selfhood alone, to carry yourself into the future. Your mental state is the ticket that determines your destination, your map the framework of intuition and persona stripped bare of determinations and delineations artificially placed by any hand outside your own, an extension of the divine hand itself. Is there anything that’s coming to your attention to whittle away, to further accommodate the streamlined state you’re entering? With grace, let it go, and know you have everything you need in the eternal now of grace’s perpetual flow. This is the new you, gazing at the eternal you, seeing in the cosmic mystery the absolute identification with purpose and action. All the times you’ve whispered to yourself “Everything’s gonna be all right” are coming back in a sublime echo now. Listen to your own voice. Let the vibrations of your coming-together in time propel you from the limitations of every definition you’ve ever carried, into a new dimension of being altogether. Everything around you reflects your divine purpose. As you are, stand tall and present yourself to the higher-dimensional You that observes and engages your emergent self in this moment. 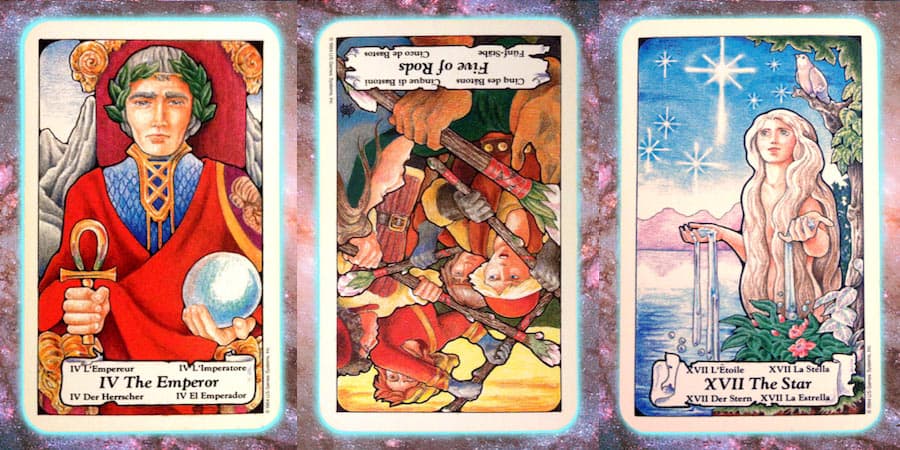 What you've carried inside prepares to emerge in a destined point of self-revelation. As with you, so with others; remain focused and undeterred by chaos.

Love
In the moment in which you forgive yourself for being human, you become more fully human, and more divine.
https://ninespath.com
Reactions: Alain, One65, Pucksterguy and 2 others
OP 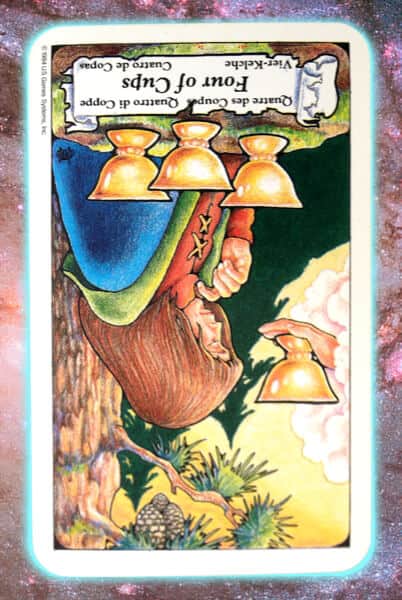 Out of Divine Hands, a Gift
midweek update

You realize something… For as long as you’ve dwelled in the space of your innermost thoughts, you’ve had the sense that you’ve missed the point of something rather important. There’s been a nagging feeling of having skirted around something that bears the full weight of self-realization. It’s not that you’ve been wantonly avoiding the truth. It’s what you’ve been after all along. However, having sampled various flavors of it, you’ve not tasted the full spectrum of what it is to be fully you. Well, the world is changing, and you have a different array of flavor points to put together. It seems you’re on the brink of adding that one missing thing that brings the whole together in a masterfully satisfying way.

You’re breaking out of a routine of thinking. Nothing could be better for you, nor better suit the opportunities that you’ve arranged in front of yourself. Unbeknownst to you, you’ve got a pretty brilliant setup. While you’ve been busy dealing with the cleanup of lifetimes’ worth of stuff scattering a debris field of experience, you’ve noticed patterns and coincidences, pearls and diamonds amid the decay. All that old stuff is falling away, disintegrating before your senses. As it does, something meaningful begins to sparkle into view. The rising light of your self-aware self-worth is hitting the facets of those compressed jewels of truth that you’ve collected, saved, strewn, and sown. Everything you’ve lost is coming back to you, and what you’ve hidden from your own view is poking into the landscape again.

What is it that’s been missing this whole time? Is it that you’ve done such a job on yourself that you’ve completely obscured what really matters? No. You’re awfully clever, it’s true, but there’s no way you can hide the truth of your own being, your own truth. As much as you work to play a trick on yourself in the state of forgetfulness, eventually memory will reveal the behind-the-scenes workings you’ve manufactured and suddenly give you a big laugh. Not before you go for the feels, though… you’ll never get the joke unless you get in touch with the value of your heart. Priceless beyond compare, your spirit sits in glory. When eventually you find that sweet spot of gratitude for all that you are, you’ll lift your eyes and notice the divine gift matching your heart’s desire. Be clear on what that might be. Treasures of the world seldom last, but those intangibles are eternal.
Reactions: Alain and June

That diving hand offering the cup from the cloud is a doozer; especially since it is reaching out to someone so intensely inward focused and not so happy. Such a beautiful card.
Reactions: Alain and June
OP

Lila said:
Such a beautiful card.
Click to expand...