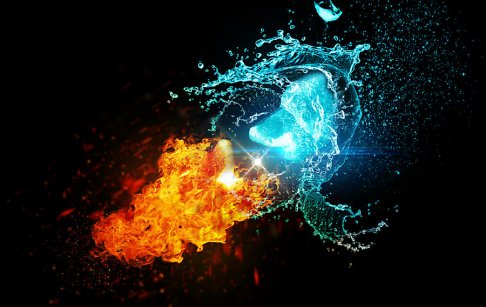 ​
Today Mars in Pisces conjuncts Neptune at almost 21 degrees. If you are born around the 11th March or 13th Sept you will feel this aspect in one way or another. Or if you have planets or angles at those degrees.

For Pisces type people this is likely to manifest in the physical world and could mean you are attending a function today or around this time, that could be musical or sporting, or an active hike in nature, a fishing trip or some other water event or sport.
It could be a rather animated spiritual gathering.

It could also mean you are having an encounter with two very different people, one more Arian and forthright - courageous and assertive, and the other more sensitive and intuitive, compassionate or caring. Or if you are Pisces or Aries it will mean you are meeting someone who is opposite in nature to you.

It could also mean you need some medical attention if you are accident prone or suffering from something inflammatory and there are hints here not to rush things too much and to take care if you are out driving or on the water, on in rough territory.

It could be a clash between a strong nature and a more passive one where the usually passive person lashes out a little more as fire and water have been known to cause a lot of sparks to fly.

And again globally this can be rather explosive. The last Sun Neptune aspect did bring a large Gas explosion in India killing many people, so there is that to think about too with this particular aspect…

Aries, Pisces, Virgos too are the main people who will feel this strongly but it's quite a powerful aspect so we can all use the energy in positive ways, creatively for art or music (dance), or spiritually, or for our own activities that may take extra courage and daring in Neptunian areas.

Yesterday the Last quarter moon phase began which is a time for readjustment or review arising from any recent crisis in consciousness which occurred near the first of the 3 eclipses in this eclipse season we are now in. This can also be a time to reap the rewards or close a project/plan. It is not typically a favorable time for launching something new, as our “audience” may be critical or uninterested.

There are 2 eclipses to go and with these, naturally it will be Capricorns and Cancerians who are having major events happen in their lives in areas of owning their own authority, clearing up any parental or relationship karma that stays stuck in the past and refuses to move past old and patterns.

This is also about how we relate to others, nurture others, how we blend our personal lives and goals with what society demands of us or we think we “should” be doing rather than what is best for us.

How we deal with authorities or our own inner authority is in a last stage of review in fact as an era comes to an end in our lives, and for the world for that matter.

Tomorrow the Sun in Gemini will quincunx Pluto , a 150 degree aspect that modifies and adjust, improves or refines and this one carries a dual influence of course , especially for Geminis and Scorpios too but for Geminis it will help them to equate the two different aspects of their nature, the outer more communicative and adaptable friendly and social side that has been known to be a little superficial at times or appear that way, with the deeper more intense aspects of your nature that is very much in touch with your own shadow self that you rarely show to others, but shows your own special inner shaman power and is able to see and accept the darkness in self and others plus the power everyone carries with them.

So Gemini type people may be digging deeper than usual for answers to what is going on with self as well as in the world at present. This is a good thing as its like a kind of rebirth of your own inner Shaman. It’s a gift.

Scorpios may be a bit more talkative than usual and perhaps not holding back so much of self as they normally would.

Tomorrow the Moon will be Apogee in Aries , very powerful, and there has already been a 6.7 Earthquake very close to Japan. These are to be expected in the Eclipse periods when the moon is Apogee or Perigee or near the Eclipses themselves.
The Apogee Moon is further from the earth but very concentrated like a laser beam focused on certain locations and people.

Aries type people will be feeling their power right now and find they are a little more emotional than usual.

Perigee and Apogee moons are quite a bit like full moons with the effect they have on the Earth and those that live here.

Last edited: Jun 14, 2020
"We are endless galaxies but we have seen just one star."
My Astrology focused Facebook Page: Neptune's Magic
Reactions: Alain, Lila and Linda

Bingo - born on March 11, and on Sunday did get some disturbing news. Ground, protect and centre!
Vibrate in accord with the universal notes​
​
Question: How do you choose the higher vibrational energies in any given situation? "You choose by taking the high road, instead of engaging in the same argument that you’ve had several times with the same person. You choose by spending more time in nature and putting away your electronic devices. You choose by being true to yourself and the impulse that you have coming to you from within, rather than just doing what everyone expects you to do, or what your parents did." Quote from the Arcturian Council, posted December 5, 2019​
Reactions: Alain, Lila and Janne

Kiera, this part's for you.
> There are 2 eclipses to go and with these, naturally it will be Capricorns and Cancerians who are having major events happen in their lives in areas of owning their own authority, clearing up any parental or relationship karma that stays stuck in the past and refuses to move past old and patterns.
Reactions: Kiera, Hailstones Melt, Janne and 1 other person

therium said:
Kiera, this part's for you.
> There are 2 eclipses to go and with these, naturally it will be Capricorns and Cancerians who are having major events happen in their lives in areas of owning their own authority, clearing up any parental or relationship karma that stays stuck in the past and refuses to move past old and patterns.
Click to expand...

Yup, I'm feeling that. Thank you for thinking of me!