Summary: Ego fights with fate, as the moment of final choice comes near. At the edge of competing elemental forces, the mind rests in a knot of an incomprehensible dichotomy. Is it too much to see what lay beyond, as change sweeps over the edge of the solid ground of awareness? Turn inward to the light you have been assimilating. Summon the audacity to see things as they are. You might be surprised at how much power is at your command. You get to write the end of the story. It isn’t in blindly following the plot as it’s been given that you find the way to a happy ending. Submitting to the substance of what arises from a willing step into expansion changes the whole setting. Enter into a new perspective. Embrace the ubiquity of love, and hold on to each other. There are surprises yet to come.

Two of Swords — The Tower (reversed) — Ten of Cups 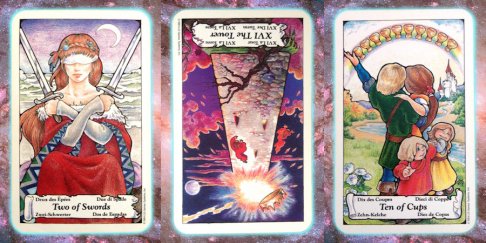 What have you got to look forward to, should you choose one road or another? There are no guarantees, no set agendas that are without the steadfast truth of change inbuilt within the foundation. It’s time to face that fact and take responsibility for the power that you hold. Gone are the days of “happily ever after” as a definitive end to every story. Some stories will end that way. Some won’t. The ones that lead into a timespace of happiness are the ones in which you stop believing in fairy-tale endings and start believing in your inherent power to change the story. Are you at the mercy of outside forces beyond your control, without recourse to some kind of adjudicative body or mind to set things straight and sane? Certainly, outside forces are at play. However, if you continue to look at things the way you’ve been accustomed to, you will only see limited pathways set by time and custom. You’ll miss the glaringly obvious. Perhaps, rather than cutting your mind in half to entertain seemingly disparate and irreconcilable realities, you can do something uncharacteristically different. The moment is upon you to dare. The heavens have been steadily pouring light into your being, altering your mental input schemata. There is much to rectify. Layer upon layer of manufactured storylines have unsatisfactory endings concocted for various purposes. Examine which of those are in your better interest and in the best interest for the whole of the world in which you live, and change the others accordingly. Dare yourself to look at those things that don’t work for you. You might see some patterns worth deeper contemplation.

So, then what happens, if you do the inner cross-examination of your mind and come to the same bitter end? How can you create something that feels worth turning your whole self in the direction of, and taking a good hard look at what’s there? The only way is to see what’s on the other side of the thing in front of you now. You can’t bend your field of vision around it. If you manage to do that, you will have created a force of density akin to a black hole. Annihilation is a choice, of course, but only if you allow it to be. Rather than bend your all-powerful lens around such a dark mass, can you look through it? You must really dare yourself, here. The truth shines ineffably on the other side of the structure the human collective has given to reality’s material bricks and mortar. For longer than anyone knows, it has been dominating the landscape, holding secrets and secret holders in the confines of its containment field. Having been built to reach to the pinnacle of heavenly power, what has it achieved? Turn your lens in accord with a willing hand steadied by faith, and dare yourself to see the truth. Your unshielded eyes and a mind free from the dictates of a script set in stone might flip the whole picture, setting aright what had been forced into place. The inherent power held captive within the structure of a manufactured architecture of consciousness is about to break the spell. Settle into your space and watch from a distance. The architects and the powers are coming to a head. Nothing can stop what’s coming, but you can claim the measure of truth that’s released. Steady now, as the picture falls.

MOST OMWARD DIRECTION: Ten of Cups

Having moved through the scary part of the story, will you be able to maintain your focus on the underlying plot line? The action has been building furiously, and continues to expand the scope of the narrative. As more is understood, more is at hand with which to weave what happens next. All the bits and pieces that you’ve collected through your odyssey are coming together. You don’t know everything yet, but you’re working your way through the difficult passages. You’re getting a feel for the flow, the sense of what’s really happening. What had seemed to your shielded vision like a roiling sea, turbulent and murky, shifts in your understanding into a sensible, sane flow. It’s not that the amount of information suddenly shrinks or calms down. Quite the opposite. It is your own expansion that makes all the difference. In claiming your free access to the open space of being, in coming together in acknowledgment of love’s presence moving through the landscape, you see things differently. What had been looming as a threat becomes part of a perspective in which nature has the upper hand. It is you who chooses truth over deception, you who holds the power to turn machinations of mind into a full-spectrum experience in which the heart and mind stand in awe of a higher mind, a higher love. What the world is becoming, through the period of a disturbing upset, holds a few surprises yet to be revealed. Promises are being fulfilled, regardless of temporary appearances to the contrary. If the pen truly is mightier than the sword, now is the time to know it. You hold the pen. Write the ending in the most fulfilling way possible.

“More philosophical tales you will not find with more emotion, scary scenes, or net fascination than this — and the main character is you! How much better can it get? Only this: that the ending has not been written yet. Only possibilities exist. Choose from among them or come up with one of your own naming, or wait to see what others concoct and play with that set of reality possibilities. A great adventure begins.”

Love
In the moment in which you forgive yourself for being human, you become more fully human, and more divine.
https://ninespath.com
Reactions: Lila and Alain