Made some notes of the major points. The main point is that the wave of woo is overcoming the government, is reaching the peak soon, and likely will run through September. 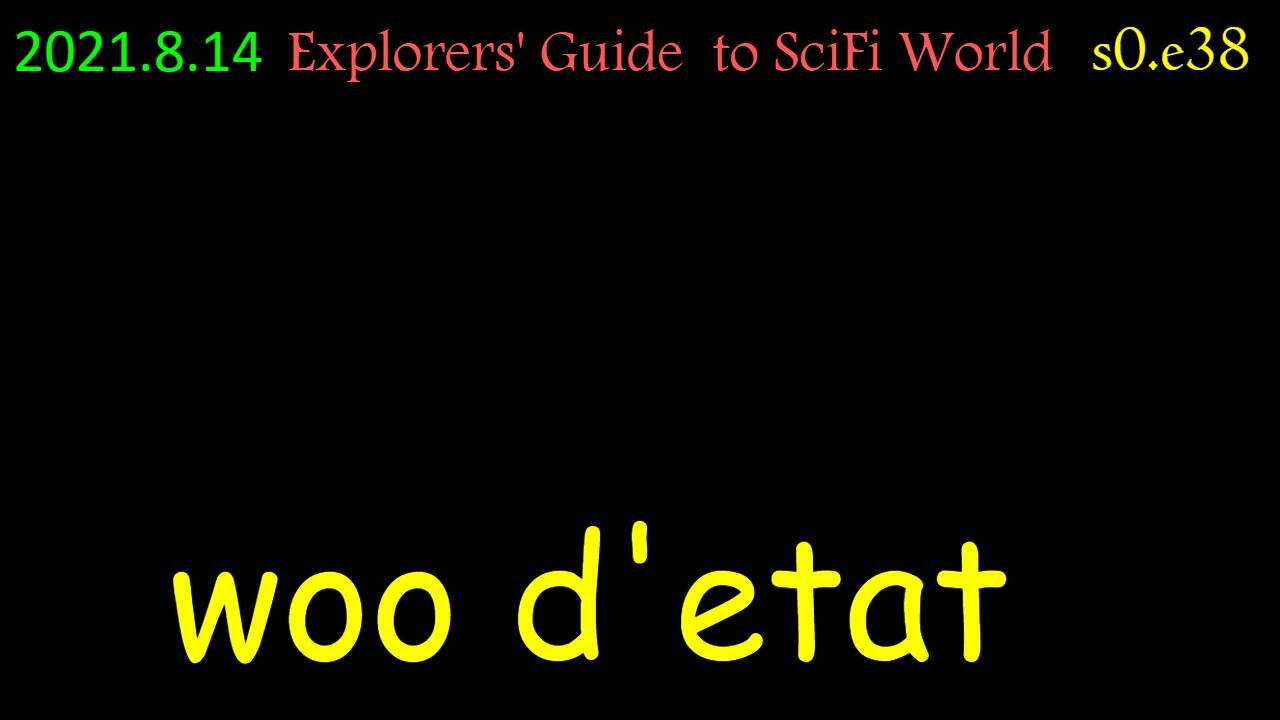 discussion of where we are at in the overwooing.


​
Everybody all around the world - Gotta tell you what I just heard
There's gonna be a party all over the world
I got a message on the radio - But where it came from, I don't really know
And I heard these voices calling all over the world
Electric Light Orchestra
Reactions: Alain, Hailstones Melt, Laron and 2 others

who or what is the CCP? thank you
Reactions: Hailstones Melt

buddy love said:
who or what is the CCP? thank you
Click to expand...

Not saying there is nothing to it and I am certainly no fan of the Chinese government/regime who do a lot of evil for sure. And yes, infiltration and meddling in international affairs is widely known, although mostly by the US done to other countries in the past.

I find it quite remarkable though that only in the USA the common enemy and scapegoat or boogeyman is almost always China nowadays, especially for the alt-right spectrum while for the left/alt-left and MSM it is (still) always Russia. They are practically interchangably blamed for everything. (Would deserve a thread of its own actually).

A hack of our security systems? Putin's minions did it (the left/MSM)! Nah, it's China (the right).
Poisoning of our food? The evil Russkies of course once again (the left/MSM). Nah, it's the CCP (the right).
Posts on facebook with 'conspiracy', 'fake news' and 'false narratives' - blame Russian trolls (left/MSM) or Chinese internet army (right) respectively.

Not formed into anything as regards characteristics or colour, naturally void, is the very Reality, the All-Good.
- The Tibetan Book Of The Dead
The Void (Article, Out-Of-Body-Boards)
OP

Sinera said:
I find it quite remarkable though that only in the USA the common enemy and scapegoat or boogeyman is almost always China nowadays, especially for the alt-right spectrum while for the left/alt-left and MSM it is (still) always Russia. They are practically interchangably blamed for everything. (Would deserve a thread of its own actually).
Click to expand...

You make a good point about always placing blame on boogey men. Looking a little past this noise, we see the media participating in lockstep. Given they often use the exact same wording, it is apparent they get their orders from somewhere else (Mockingbird). Who are these hidden hands - can't say, but am pretty sure they've been active here and in other countries for a long time.

Going back a few years, we can see the same disruption and domination actions from many other countries. While I'm more familiar with Europe and the USA, it has happened elsewhere. The way I see it is that people like you and I would never agree or participate in these actions, but they have been packaged to make it palatable by inventing fake news, which is our only source of information - that is until the internet. While it was planned as another mass hallucination product, people began to see through it, and that is why we are able to communicate in places like this.

One of the points Clif makes which is very salient - duality suggests there must be 2 sides - i.e. Fascists and Communists. However, both Clif and other parties I have heard/read are saying when you boil it all down, it is Communism. Fascism is the flip side of the coin, presenting as duality. However, drivers are the same for both.

In relation to underground plans of Council of Rome or Committee of 300 (and offshoots like Tavistock) having been either 50-60 years in the planning, or even only 30 years ago when exposed by Dr John Coleman, it is a long lead-time and it points to one status, not the duality status, and that status is directed by (most likely off-world) Hidden Hand (expression first rendered by David Icke).

I attach a pdf for those who want to research this back a bit. It really does take deep research to get beyond the scum rising to the top of the pool.

I also have the pdf of The Conspirators Hierarchy - the Committee of 300 by Dr John Coleman (self-published in early 1990's) but the file is too large to upload here. Contact me on PM and I can email it to you, if interested.

Vibrate in accord with the universal notes​
​
I see it's time to change my signature message. Out with the old and in with the new! ​

Here is a taster from Chapter Two of "None Dare Call it Conspiracy" - about Communism - the real one that we are all threatened by today:-

​
Everyone knows that Adolph Hitler existed. No one disputes that. The​
terror and destruction that this madman inflicted upon the world are universally​
recognized. Hitler came from a poor family which had absolutely no social​
position. He was a high school drop-out and nobody ever accused him of being​
cultured. Yet this man tried to conquer the world. During his early career he​
sat in a cold garret and poured onto paper his ambitions to rule the world. We​
know that.
​
Similarly, we know that a man named Vladimir Ilyich Lenin also existed.​
Like Hitler, Lenin did not spring from a family of social lions. The son of a petty​
bureaucrat, Lenin, who spent most of his adult life in poverty, has been​
responsible for the deaths of tens of millions of your fellow human beings and​
the enslavement of nearly a billion more. Like Hitler, Lenin sat up nights in a​
dark garret scheming how he could conquer the world. We know that too.​
Is it not theoretically possible that a billionaire could be sitting, not in a​
garret, but in a penthouse, in Manhattan, London or Paris and dream the same​
dream as Lenin and Hitler? You will have to admit it is theoretically possible.​
Julius Caesar, a wealthy aristocrat, did. And such a man might form an alliance​
or association with other like-minded men, might he not? Caesar did. These​
men would be superbly educated, command immense social prestige and be able​
to pool astonishing amounts of money to carry out their purposes. These are​
advantages that Hitler and Lenin did not have.
​
It is difficult for the average individual to fathom such perverted lust for​
power. The typical person, of whatever nationality, wants only to enjoy success​
in his job, to be able to afford a reasonably high standard of living complete with​
leisure and travel. He wants to provide for his family in sickness and in health​
and to give his children a sound education. His ambition stops there. He has no​
desire to exercise power over others, to conquer other lands or peoples, to be a​
king. He wants to mind his own business and enjoy life. Since he has no lust​
for power, it is difficult for him to imagine that there are others who have ...​
others who march to a far different drum. But we must realize that there have​
been Hitlers and Lenins and Stalins and Caesars and Alexander the Greats​
throughout history. Why should we assume there are no such men today with​
perverted lusts for power? And if these men happen to be billionaires is it not​
possible that they would use men like Hitler and Lenin as pawns to seize power​
for themselves?
​
Indeed, difficult as this is to believe, such is the case. Like Columbus, we​
are faced with the task of convincing you that the world is not flat, as you have​
been led to believe all your life, but, instead, is round. We are going to present​
evidence that what you call "Communism" is not run from Moscow or Peking,​
but is an arm of a bigger conspiracy run from New York, London and Paris. The​
men at the apex of this movement are not Communists in the traditional sense​
of that term. They feel no loyalty to Moscow of Peking. They are loyal only to​
themselves and their undertaking. And these men certainly do not believe in the​
clap-trap pseudo-philosophy of Communism. They have no intention of dividing​
their wealth. Socialism is a philosophy which conspirators exploit, but in which​
only the naive believe. Just how finance capitalism is used as the anvil and​
Communism as the hammer to conquer the world will be explained in this book.​
​
The concept that Communism is but an arm of a larger conspiracy has​
become increasingly apparent throughout the author's journalistic​
investigations. He has had the opportunity to interview privately four retired​
officers who spent their careers high in military intelligence. Much of what the​
author knows he learned from them. And the story is known to several​
thousand others. High military intelligence circles are well aware of this​
network. In addition, the-author has interviewed six men who have spent​
considerable time as investigators for Congressional committees. In 1953, one of​
these men, Norman Dodd, headed the Reece Committee's investigation of tax-free​
foundations. When Mr. Dodd began delving into the role of international​
high finance in the world revolutionary movement, the investigation was killed​
on orders from the Eisenhower occupied White House. According to Mr. Dodd, it​
is permissable to investigate the radical bomb throwers in the streets, but when​
you begin to trace their activities back to their origins in the "legitimate world,"​
the political iron curtain slams down.​
​
None Dare Call It Conspiracy By Garry Allen​

house prices and banks mostly by them, they are the main reason in my country for the big inflation in housing costs and i can good imagine it is everywhere the same