This is an interesting one. I think many of us have wondered when space mining would eventually take off, as that is just want humans do — they keep expanding out further from their source. 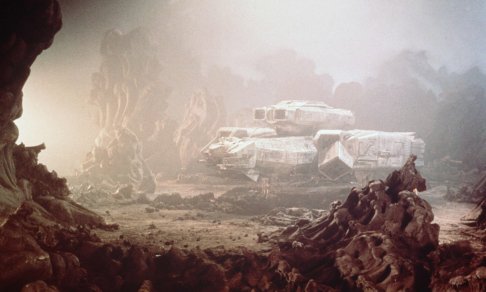 ​
Interplanetary mining, as envisaged in the film Alien (1979). Photograph: 20th Century Fox/Kobal/Rex/Shutterstock ​
"Great swathes of the solar system should be preserved as official “space wilderness” to protect planets, moons and other heavenly bodies from rampant mining and other forms of industrial exploitation, scientists say.​
​
The proposal calls for more than 85% of the solar system to be placed off-limits to human development, leaving little more than an eighth for space firms to mine for precious metals, minerals and other valuable materials.​
​
While the limit would protect pristine worlds from the worst excesses of human activity, its primary goal is to ensure that humanity avoids a catastrophic future in which all of the resources within its reach are permanently used up."​
— https://www.theguardian.com/science/2019/may/12/protect-solar-system-space-mining-gold-rush-say-scientists​

What comes to mind is the eventual encounters with ETs, with such exploration and activity out in the solar system. Of course, man has already encountered them within the secret groups out there, as there’s a multitude of information indicating that.

Then it makes you wonder if these space-mining corporations will also keep such things secret — hidden from the populace — or by the time this is in full swing, ET relations may already be taking place? But there’s lots of other reasons to keep ET contact secret for corporations that have so much money and power, such as for technological and trade deals between them and ETs.

That may sound farfetched, but it’s been going on for a long time already back here on Earth; I expect the same thing to continue when humanity “officially” expands out into the stars.