Why Total Eclipse is a Threat (1 Viewer)

By Ken Ring: "A solar eclipse occurs in the daytime, around noon, when the new moon passes in front of and blocks out the sun. A lunar eclipse is at midnight. Any eclipse can only be when the earth, sun and moon are in a line. An eclipse will never occur on a quarter moon. As well as total eclipses, lunar and solar, there are 'partial' , 'hybrid', annular' and 'penumbral' eclipses, depending on how much of the eclipse can be seen from different vantage posts on Earth.

The transiting moon daily increases the height of the sea. As lunar gravitational forces go through the air to reach to the inner core of the earth, so is the sea and air, which in layers sit on and above the land, subject to a tidal change which begins in the solid earth. The result is an increase in air height when the moon is above the horizon, at times up to 20%. That weather balloons float higher on new or full moon days, indicating king tides in the air is the result.

On a full moon night, moonrise is at sunset. The air warmed by the land which was in turn warmed by the sun throughout the day is lifted upwards by and towards the rising moon. This warmer air now aloft prevents the cooler night air from condensing the water vapor near the ground and forming clouds. The result is a perceived clearing of the night sky. In short, the full moon makes you see it, by lifting the air (warmed by the day's sun on the ground) that pushes back the colder air coming down from the edge of space that would otherwise cause the appearance of clouds, that would otherwise block out the sight of the moon.

All over the world, overcast skies on full moon nights are rare. It was certainly a noticed phenomenon and gave rise to all sorts of expressions in folklore, now mysteriously censored out, because we are only allowed to ponder that the weather is caused by fossil fuel emissions. "The full moon eats clouds", and “the full moon clears the sky”, are now gone from our daily conversations. 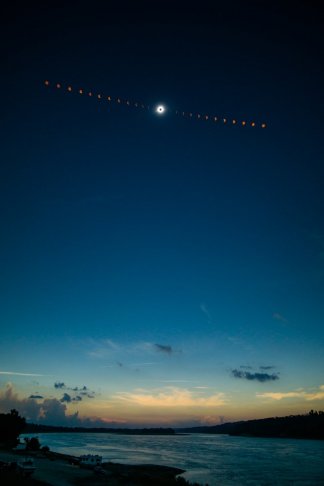 ​
Usually the full moon passes above or below the earth’s shadow because the moon's orbit is tilted 5deg from the Earth's orbit around the Sun, called the ecliptic. A lunar eclipse occurs when the full moon is nodal, that is, it is sitting right on the ecliptic, like shooting at something at point blank range instead of standing off to the side. That is why in an eclipse the earth blocks out the sunlight that usually shines through space past the earth and onto the moon, to be always seen (in full moon time) from the dark side of earth.

That is the secret of why eclipses give warnings of dire weather events. The nodes are the key. When the moon is nodal, there is no parallax. When somebody is firing at point blank range the bullet cannot miss. What begins as a frontal system and may stay so, will turn into a rain event when and if the moon hits the nodal position. A cold front is likely to turn into snow. Hence it sets up future events that may now be brewing, to maximise within three months. That’s why I have said to watch out for a seismic disturbance on the 22 January 2023.
To finally recap, the moon is in circulation around the earth once per month, as we all know. It moves slowly to the east, covering nearly 13° per day. At the end of a 29-day month it has gone 360° around the earth. You can think of the earth as a mum and the dwarf moon running around her in the manner of a 2-year-old called Luna, who is changing her position every moment. Here’s what Luna does.

At any one time, there is a changing mum-shadow on Luna's face (phase). During the dancing around her mum, because her mum is on a lean (obliquity or tilt), Luna looks down from above and up from below (northern and southern declination) once, and crosses mum’s belt-line (lunar equinox), twice per month, which is when Luna speeds up. There is also a coming in towards mum and going away from mum once per orbit which represents another speeding up and slowing down (perigee and apogee). Each of these types of movement is out of sync with the rest, unless one takes a long-term view and observes that they all obey predictable cycles. As well as all her other dance steps, Luna keeps stepping from right to left, like a sidestepping rugby player. But once every six orbits she is face-to-face (nodal).

A highly energetic dwarf-person, upfront and in your face can be more threatening and stressful to your wellbeing than at any other time.

Ask the mother of any two-year-old."