Article Why nothing is flat, straight or linear? (1 Viewer)

Now that we have seen that the vision the world has of some cultural or social movements is determined by the activation of the ancestral paradigms present in the human psyche by the control system through collective unconscious 33, if someone ever asks you, why is the Earth round? What is the answer? 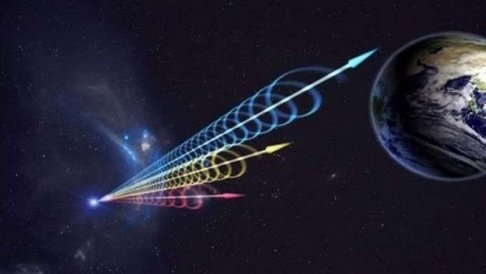 ​
The Earth, and by extension, all the planets and stars within the physical plane, as well as all the celestial objects that we perceive in the universe that we can observe, has a spherical shape because it is the only way or geometry that adapts to the movement of energy in the fabric of space-time in a perfect way. That, so said, does not make much sense, but if we understand how the energy of the octaves moves from the mental plane to the etheric and then to the physical, what we would see would be sinusoidal waves, as you know, carrying information and the energy that forms the creation of reality from the mental event towards the physical event.

Well, if from higher planes all that exist are waves, "quantum" fields, and energetic forms that move in wave form with a certain amplitude, the frameworks and substrate for the displacement of those waves have to adapt to that movement. This, in the mental plane or in the etheric plane, is not a problem, because they are fluid planes, but it is in the physical plane, since being the material aspect so rigid and dense a sinusoidal energy could not be adapted to a material framework that is not curved.

So, if a curved space-time framework is necessary to be able to move energies from one point to another of the universe, through space, through the "ether," through the "quantum" field of Creation, that network when it is time to manifest the last step of the octave for the creation of solid and perceptible reality to the senses, it must also be curved, otherwise, the sinusoidal wave, already on the physical plane, which is behind the movement and condensation of all particles, could not collapse into something "solid" and material to our senses.

Thus, space is curved, time is even curved as well as simultaneous, although that we may see in more detail in future articles, the elements within that space have to be curved. As the spaces and material elements are formed from mental forms first and etheric second, when matter takes shape at the level of planets or stars, it takes shape according to the etheric and mental molds, accumulating matter in the sinusoidal energy currents that carry the particles that will form, solidifying, the material framework for conscious life on the physical plane.

Hence, the only acceptable way to sustain a "palpable" physical reality consistent with an etheric, mental and superior reality where everything is pure energy in constant movement, but movement in wave form, is a sphere, because there is no way that an etheric wave can create a square planet for example, or a flat planet. It does not have a way to reduce its vibration so that something sinusoidal, millions of sine waves, can form a framework that is not curved, spherical and circular.

Then, within the planetary framework, the curves become much smaller, the projective octaves of reality are reduced to very small sizes, and the sinusoidal wave may seem almost flat in its projection, but only because its amplitude has diminished enough to not present ridges and valleys in their mental and etheric part that need spherical forms to always manifest, which means that, on a small scale, we can have objects or elements in the solid world that appear to be 100% straight, even if only in our perception, because then, at the atomic level, the atoms are still spheres, and the particles that make up the atoms are still spheres, and the quantum particles of those particles are spheres, and so on up to the level of the monad which is a sphere as well to allow the movement of rotation and change between axes and vectors that give us all the possible combinations for the creation of all the possible dimensional frequency levels, evolutive, energetic, etc.

Therefore, although it is complex, this is the reason why nothing is "flat," straight or completely linear, although at the "earthly" level many elements may seem so to us. Energy does not move straight and cannot collapse and condense into anything that has that shape.

About the Author
David Topi is an engineer, multifaceted writer, trainer and therapist. One of his main areas of focus is educating and helping people through spiritual and personal processes. He is an energy healer and uses the “Akashic” healing technique. He is trained in metaphysics, alternative methods, inherent spiritual abilities and in personal deployment systems that allow humans to express their maximum potential and find answers for their questions. Back in 2013 he created EMEDT, Metaphysics and Transpersonal Deployment School, to provide a framework, organised and structured to the training he teaches. The website for David Topi's Spanish based Metaphysics and Transpersonal Deployment School can be found here, http://emedt.org. David Topi's home page can be found here, http://www.davidtopi.com (Spanish).
You must log in or register to reply here.
Share:
Facebook Reddit Pinterest Tumblr WhatsApp Email Link