Weather warfare may pass without some controls (1 Viewer)

About 43 years ago, the Daily News in Bowling Green, Kentucky, USA, covered a story about weapons used to create floods, drought, tidal waves, holes in the ozone layer, and hurricanes steered over the ocean towards enemy cities. 'Such weapons don’t exist yet, but research is underway in the US and—according to Pentagon spokesmen—in Russia toward developing some weather weapons. The US apparently took the first step. The Defense Department acknowledged last May that for six years during the Vietnam War it secretly conducted rainmaking programs over Southwest Asia.'

The article also discusses the potential for 'influencing the human brain' by manipulating the electrical frequencies in the ionosphere, i.e., HAARP. This was written in 1975, so think about the technology advances since, especially with the implementation of ET technology—agreements have been made between man and ETs in exchange for knowledge.

While the shift in consciousness is taking place because of the astrological age cycle we’re traversing through, and changes in weather and climate are therefore to be expected—including changes on other planets—we also have to accept the possibility that not all that we see occurring is natural, as the intention is there, and highly likely the technology, to manipulate and create such events. 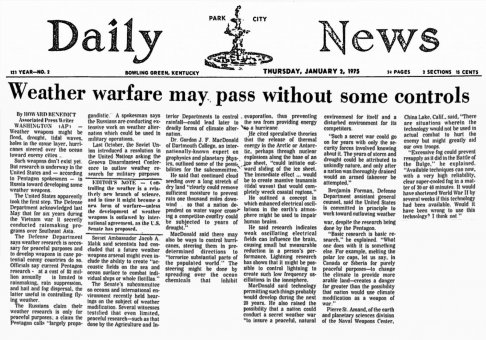 I have absolutely NO DOUBT that much of what we are seeing is manipulated weather. California's "ridiculously resilient high pressure ridge" from a few years back during "the drought" was just one example. I'm also certain that many of these major storms we've been seeing have been "enhanced" by Deep State technology. The response, preparation, and recovery are highly beneficial to their coffers--and the energetic results similarly further their agenda for distraction, disempowerment, and low-vibratory emotions.

The good news, I feel, is that people have awakened so much that it's becoming more and more difficult for them to succeed. Organized and focused meditations have "defused" much of the damage and in some cases (like California's engineered drought) have completely countered the efforts. As more and more positive energies ramp up our consciousness, this manipulation will eventually fail completely and be unnecessary.
Love always,
Stargazer

Stargazer said:
I have absolutely NO DOUBT that much of what we are seeing is manipulated weather.
Click to expand...

I disagree, I sense it is all part of the shift and the natural cycle and there are just occasional events that relate to man's interference.


Stargazer said:
Organized and focused meditations have "defused" much of the damage and in some cases
Click to expand...

I actually see this has harming the shift and on occasion delaying it, as people interfere with the natural process and the karma of others.
Reactions: Hailstones Melt and Stargazer

Laron said:
I actually see this has harming the shift and on occasion delaying it, as people interfere with the natural process and the karma of others.
Click to expand...

That's certainly reasonable, but perhaps it's also necessary part of our learning process--where we begin to understand that we actually DO have some control over things like weather and our physical world. Karma notwithstanding (as that will certainly apply), these exercises may be appropriate for the experience we're having now, in this moment. I've been practicing lending support to a situation or area of perceived need by intending to support the "highest experience for the benefit of all", and letting the energy go to be used as appropriate (for those who may need it--and NOT for those who don't). As I see it, I wouldn't be shown or become aware of these situations if there wasn't a reason for it. This indicates to me a "Choice" point. I can ignore it, observe it, accept it, support it, or resist it. Then I simply go with the choice I feel is appropriate for me at the moment. Most of the time, I observe, support as best I can (through intention), and then accept whatever manifests.

If I have to face karmic repercussions for those choices one day, then sobeit. I try my best to have pure intentions and not violate "free will". But along with OTHER people having free will, they also need to understand that I ALSO HAVE MY OWN.
Reactions: Sam Vause and Laron
OP

In the end it's about the amount of one thing over the other and I just pick up that it's not as extreme as people think, as in the impact of mans interference on the world, including climate change, as so much more is going on with the earth's consciousness rising and the cycle in relation to the shift in consciousness. Certainly, when man creates specific events and people get together to stop or lesson them, this is positive karma and very high vibrational intentions to have, but how do you know for sure?

Part of this is also information based, based on what I have learnt, so not just a knowing/claircognizance; there is a lot of disinformation out there, and people have caught up in collective consciousness beliefs, even sensitives/psychics who tap in can pick up on information that is based on the greater numbers, even if that information is incorrect or partly inaccurate.

I think I've mentioned this before, but certainly the highest good is the best way to go if you don't have a strong intuitive feeling of assurance around what you are doing, however, there are beings above and beyond us humans down here, which includes other aspects of ourselves, who are looking after these things so we just need to have trust. The conditions here are here for a reason and I think that some interfere in too much, when they should really be focusing on themselves, and helping others focus on themselves in terms of self healing and exploring consciousness.

Participating in a meditation to do something that you think is positive even if it may not be; what's important here is the intention one holds when going into it. However, I'm sure there are a lot of people in history who have had good intentions, yet their leaders have had very bad ones, so they may have taken part in atrocities without realizing it. We have to take hold of the time that we have—I see higher priorities when deciding what to do with our time.
Last edited: Oct 21, 2018
Reactions: Alain, Sam Vause and Stargazer

via mr mbb666 there are a view haarp proofs and even cloudforms that are not natural, i would say with precaution that half of what we see is natural and the other part created
Reactions: Stargazer and Laron

Laron said:
Certainly, when man creates specific events and people get together to stop or lesson them, this is positive karma and very high vibrational intentions to have, but how do you know for sure?
Click to expand...

We probably won't know for sure until we go through our after-life review. I suspect that's where we'll weigh our intentions, actions, and understand any karmic repercussions for those actions. At the end of the day however (in the here and now), we can only do what we feel is the best and highest expression of Self.


Laron said:
Part of this is also information based, based on what I have learnt, so not just a knowing/claircognizance; there is a lot of disinformation out there, and people have caught up in collective consciousness beliefs, even sensitives/psychics who tap in can pick up on information that is based on the greater numbers, even if that information is incorrect or partly inaccurate.
Click to expand...

I've never put much weight into whether or not any information is based upon "greater numbers". You can, for instance, have a whole BUNCH of people who believe that sticking their fingers into light sockets is fun. LOL. Me? Not so much. So I'm going to chose NOT to stick my finger in there (unless there's a VERY good reason), every time.

At the end of the day, each of us has to do his or her own research, weigh all the variables, and choose the path or actions that resonate WITH US, no matter WHAT anyone else may tell us, no matter WHO that person may be. There are a lot of folks who claim to have abilities, knowledge, or insight. There are self-proclaimed "gurus", "teachers", "guides", and many others--and just because they are convinced they've found THEIR Truth doesn't mean that it's MY Truth. Each of us, as Divine, Sovereign Beings, must be allowed to decide for him, her, or itself what Truth means for them. For me, that's the hallmark of the True Spiritual Journey. The bottom line for me is that MY TRUTH IS WHAT I DECIDE TO BELIEVE. And if all possibilities truly exist, then there are MANY different versions of "Truth". It all depends upon what path a person chooses for themselves.
Reactions: Alain and Laron

Perhaps it fits here i find the thought interesting. The talk is about the disapearing water that reappears later on other places. So if that arrives at holland up to bruxelles or further the water can come