I've heard he (horns guy, Jake Angeli) infiltrated antifa and actually has some connection with q? He's supposedly a ex marine or something.
I have heard that there were some, I'll say, operatives that got in with the antifa group and they grabbed some computers with evidence and such.
I think it was planned, staged, and used for both the bad and the good guys for different purposes.

I personally think trumps "orderly transition" comment is because he will very easily transition into the next term. Heheh
Reactions: azlynn, Laron and Tania

Angela said:
I've heard he (horns guy, Jake Angeli) infiltrated antifa and actually has some connection with q? He's supposedly a ex marine or something.
I have heard that there were some, I'll say, operatives that got in with the antifa group and they grabbed some computers with evidence and such.
I think it was planned, staged, and used for both the bad and the good guys for different purposes.

I personally think trumps "orderly transition" comment is because he will very easily transition into the next term. Heheh
Click to expand...

About Mr Trump - I hope for his transition to - spiritually
- not into a new term unless his whole shtick changes
He really is a heart attack waiting to happen god bless
Reactions: Laron

I don't buy it either. This looks 'too good' for the MSM as propaganda pictures. Not just that Horns guy but also this guy for example with his menacing way and even demonstrating his extra-large Qanon-Trust-ThePlan-shirt on: Nope. This is an actor.

Also other pics in this RT article prove the set-up in my view: https://www.rt.com/usa/511810-out-of-control-mob-storms-capitol-hill/

And even if it was still 'real' Trump and Qanon people then it was still a set-up because these morons were let into the building to do what they were 'supposed' to do for the press in order to use them to bash them and Trump later on.

This 'storming' of the government building reminds me of something. They did a similar thing this summer in Berlin during the great lockdown protest. There was a supposed 'storming' (attempt) of 50 or so "Reichsbürger" trying to get into the German Reichstag building and they were let do what they did. Not much police were present which already was strange. So immediately the mainstream press (who was there in numbers!) connected the entire freedom movement (with thousands if not a million protesting peacefully on the streets) to "nazis" although it was only a small group (who are btw only 'almost' but not really Nazis). Some of the German truth movement also suspected that this it was even a psyop with maybe Antifa groups posing as right-wingers. So we have the same story or strategy here. Maybe "they" (Deep State) learnt from what happened in Berlin and saw how it worked well and applied it here again as the US version. en.wikipedia.org
Let your Truth be Authority rather than Authority be your Truth. - Sinera Arenis
Do or Do Not. There is no Try . - Master Yoda

Most doctors continue to practice with comfortable indifference. Some see the errors, damage, and limits of their practices but still walk lockstep with the herd and protect the brotherhood. I don’t know what it will take to get these doctors to resist the dictates who rule over them. I’ve had far more success reasoning with parents and intelligent people who are not attached to traditions that are damaging, unscientific, and not even supported by our own medical literature. - Dr. Suzanne Humphries
Reactions: Tania 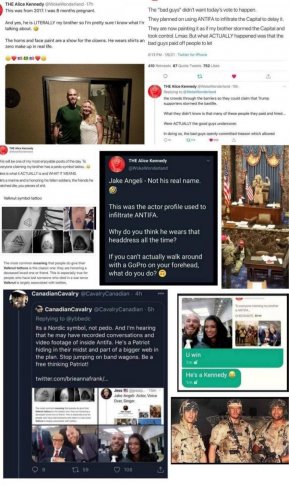 I found this pretty interesting.
Reactions: Tania, azlynn and Linda

Something of a historical afternoon - twitter banned just about every account of people who report the actual news - including General Flynn and Sidney Powell. I watched people I follow go down one at a time. It is insane. Of course, people knew it was coming and already established accounts on Parler, Gab, etc.

So, what do you think people are doing now - paying even more attention to the new accounts and joining Parler, etc in droves.

Jack and his crew must be out of their minds / stupid / arrogant - or perhaps a nice blend of all three.
Everybody all around the world - Gotta tell you what I just heard
There's gonna be a party all over the world
I got a message on the radio - But where it came from, I don't really know
And I heard these voices calling all over the world
Electric Light Orchestra

Curiously, my astrological charts show us hitting the wall around February next year, so, if that is correct things will continue getting crazier until then. Much wishful thinking currently pointing to the bad guys getting what is due to them (created by themselves) very soon, but no physical action from any side supports those comments yet.
If the February 2022 period (plus / minus a month or so) is good, violence will be part of the picture I'm afraid.

Another actor identified it seems. Far-Left Antifa/BLM activist John Sullivan has been identified as one of the people who allegedly was part of the siege of the Capitol building yesterday—you know, one of the “violent Trump supporters” we’ve been hearing so much about in the news. (Article by Patty McMurray republished from 100Pe

GregH3000 said:
Excuse the rant- it just blew me away that about 40% of Democrats really have no clue as to the level of fraud and corruption that has demonstrably been going on here
Click to expand...

Yes but the same is true of some GOP voters too. My mom has no clue what is going on, but she supports Trump only based on one of his stances. Although I do find GOP voters tend to be better read and they better understand what is really at stake here.

There have been numerous videos where the host asks the general public on the street who said this quote. The quote would be something very racist or bigoted, and of course the Dems would assume it was Trump, when it was actually Obama or Biden who said that. Here are some quotes from Biden if you want to see them. http://wordsalad.info/dem-hist.html

Some of the videos on that page might still be online but many will be censored already. When I look at an issue I look at both sides of the issue. That is how I was taught. Only then can a person make an informed decision.

If Beijing Biden is inaugurated, Americans are no longer citizens, but SUBJECTS. This is an important legal distinction. Part of the first amendment is the sovereign right for redress of grievances, which have been denied to Trump's legal team all the way up to the feckless Supreme Court run by traitor CJ Roberts. As Frederick Douglas summarized this truth so well, if the soap box and the ballot box fail, then we are down to the cartridge box. NO TAXATION WITHOUT REPRESENTATION.

Resist tyranny and the coming lockdowns, mandatory mask-wearing and forced vaccinations. Remember these words from The Gulag Archipelago :

"And how we burned in the camps later, thinking: What would things have been like if every Security operative, when he went out at night to make an arrest, had been uncertain whether he would return alive and had to say goodbye to his family? Or if, during periods of mass arrest, as for example in Leningrad, when they arrested a quarter of the entire city, people had not simply sat there in their lairs, paling with terror at every bang of the downstairs door and at every step on the staircase, but had understood that they had nothing left to lose and had boldly set up in the downstairs hall an ambush of half a dozen people with axes, hammers, pokers, or whatever else was at hand? After all, you knew ahead of time that those bluecaps were out at night for no good purpose. And you could be sure ahead of time that you’d be cracking the skull of a cutthroat. What about the Black Maria sitting out there on the street with one lonely chauffeur – what if it had been driven off or its tires spiked. The Organs [Soviet state institutions] would very quickly have suffered a shortage of officers and transport and, notwithstanding all of Stalin’s thirst, the cursed machine would have ground to a halt!" --Alexander Solzhenitsyn
OP

^^ My above post doesn't mean people should stop posting on this thread if the content is relevant by the way!

This is the only "latest" update I can find over the past weeks that were relevant - everything else is a derivative of the same theme:
Esp the Dominion server seizure and Sidney Powell's Kraken reports: Mike Lindell Update: "I Delivered Evidence To President Trump That He Won 79M to 68M!"

We all saw Mike Lindell visit the White House yesterday…. And today we just got the scoop about why, and what was discussed! In a new interview with Right Side Broadcasting (that was immediately deleted by YouTube after uploading), Mike Lindell breaks down his whole meeting. He explains what...

for the laughs.... a billboard in florida... it is the truth.