He was recently featured in the media, hence his tweet above. Here's one article covering what he said on Yahoo News:
https://news.yahoo.com/single-most-qualified-mrna-expert-173600060.html

""One of my concerns are that the government is not being transparent with us about what those risks are. And so, I'm of the opinion that people have the right to decide whether to accept a vaccine or not, especially since these are experimental vaccines," said Dr. Robert Malone during a Wednesday segment on Fox News's Tucker Carlson Tonight, saying YouTube deleted a video of him speaking about the associated risks."
Social Media: Facebook | Telegram | YouTube | Rumble
Lighthouse at the Oasis: Facebook | Telegram | Discord
My Services: laron.nz & OBE Course: consciousness.life
OP

"The most highly cited physician on the early treatment of COVID-19 has come out with an explosive new video that blows the lid off the medical establishment’s complicity in the unnecessary deaths of tens of thousands of Americans.
Dr. Peter McCullough said these deaths have been facilitated by a false narrative bent on pushing an all-new, unproven vaccine for a disease that was highly treatable.."

"..We have now a whistleblower inside the CMS, and we have two whistleblowers in the CDC. We think we have 50,000 dead Americans. Fifty thousand deaths. So we actually have more deaths due to the vaccine per day than certainly the viral illness by far. It’s basically propagandized bioterrorism by injection.

Something I put together earlier: 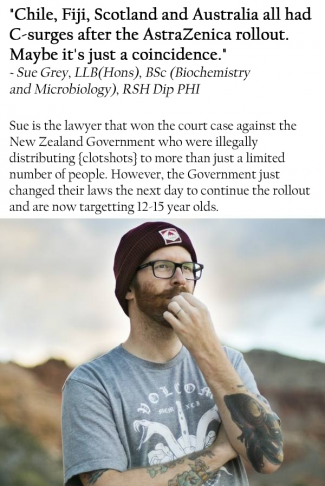 A knowledgeable AFLDS source inside the Centers for Disease Control (CDC) stated that deaths occurring within 72 hours of COVID-19 shot injection are significantly underreported in the publicly-available VAERS database maintained by the Federal Drug Administration (FDA). “This is shocking,” the source said, “and informed consent, which is required under the law, is impossible when safety data is so misleading.” As of July 9th, reported deaths in VAERS totaled 10,991. Of those, 4,593 were within 72 hours of vaccination. The CDC source has provided a sworn statement that the actual number of deaths are conservatively five times higher, meaning that as of publication, we are approaching at least 55,000 vaccine-related deaths."
https://americasfrontlinedoctors.org/frontlinenews/aflds-suit-seeks-to-immediately-revoke-emergency-covid-vaccine-use-based-on-disturbing-new-mortality-data/
OP

"French President Emmanuel Macron has been forced to back down on imposing mandatory vaccine passports for entry to shopping malls after volatile nationwide protests.

Those continued over the weekend, with around 114,000 people participating in protests in major cities like Nantes, where police again used tear gas to disperse demonstrators."
https://summit.news/2021/07/19/macron-forced-to-back-down-on-mandating-vaccine-passports-for-shopping-malls-after-nationwide-protests
OP

An interview with a doctor who decided to speak out (May 17). 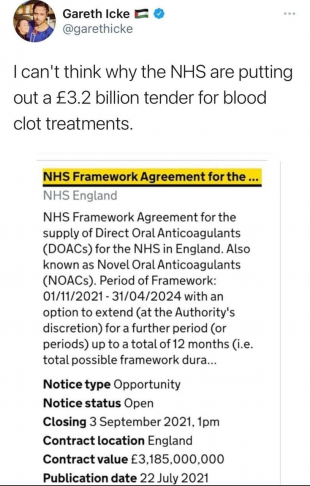 APWU Statement on Mandatory Vaccination for Federal Employees
"Various media outlets have reported that the White House is considering mandatory COVID-19 vaccination as a condition of employment for federal employees.

Maintaining the health and safety of our members is of paramount importance. While the APWU leadership continues to encourage postal workers to voluntarily get vaccinated, it is not the role of the federal government to mandate vaccinations for the employees we represent.

Issues related to vaccinations and testing for COVID-19 in the workplace must be negotiated with the APWU. At this time the APWU opposes the mandating of COVID-19 vaccinations in relation to U.S. postal workers."
https://www.apwu.org/news/apwu-statement-mandatory-vaccination-federal-employees 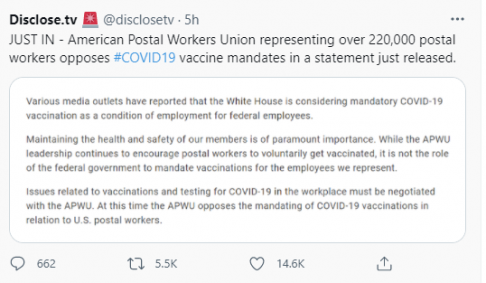 Mercola: Moderna Had Specific COVID-19 mRNA Shot Ready in 2019 BEFORE Pandemic Was Announced
"It is now apparent that Moderna had already completed development of its mRNA gene therapy shot in 2019 BEFORE COVID-19 was announced to be spreading from China to the world. This has serious ramifications to the entire pandemic narrative.

There are only two possibilities. First, Moderna had advance knowledge of the COVID-19 virus and created a shot to prepare for it. Second, Moderna didn’t have advance knowledge but was developing a generic gene therapy treatment that could be directed toward any type of coronavirus. Either possibility is disturbing. ⁃ TN Edito.r" 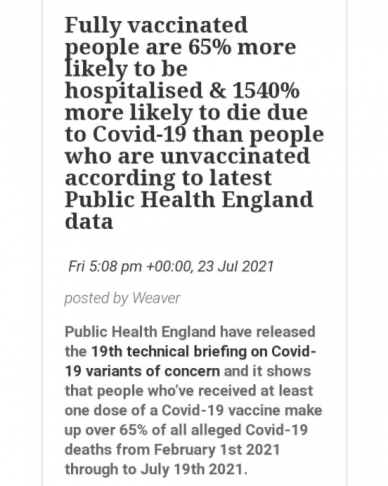 "It is what it is and all the time they were faking the pandemic tell me who died at their house? Tell me who died in the street? No one that I can remember. But now I'm seeing videos of it people saying hey I haven't heard from my friend i… "


Note that there's a few comments saying the video is a year old.
OP 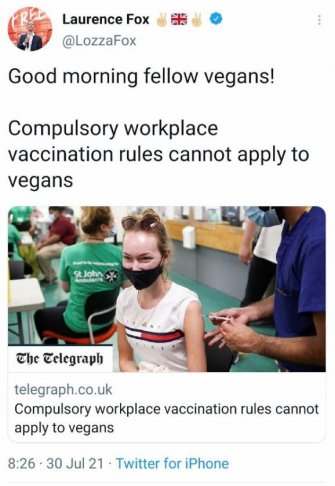 I was talking to a remote viewer a couple of days back who’s got 20 years of experience and who now teaches remote viewing. He shared information with me about the c0v1d [email protected] Based on a blind remote viewing project in December last year, cancers, sterility and fibroid tumors were detected in females who’d taken it. He said, “The sterility issues in both partners moving forward will cause fertility problems in the next generation, sadly.”

He also went on to say that the [email protected] particles sever the body’s connection to source energy, and “this also leads to entity parasitization [and] the body… becomes an entry point for dark entities to use.”
OP

Martial Law Has Arrived in Australia! Military Summoned to Occupy Parts of Sydney
"In perhaps the most draconian move yet from any country, the Australian government has officially enacted martial law in Sydney. After the Freedom Day protests that rocked Australia’s largest city, the Sydney lockdown was extended to at least August 28th. But it appears the military will enforce the lockdown this time. Military personnel will patrol the streets to prevent future protests. I’ve repeatedly referred to Australia as an open-air prison. But the ‘open-air’ aspect of the prison is shrinking by the day."
http://hottodaynews.com/2021/07/30/martial-law-has-arrived-in-australia-military-summoned-to-occupy-parts-of-sydney/
OP

Some Vaccines Support Evolution of More-Virulent Viruses
"Scientific experiments with the herpesvirus that causes Marek's disease in poultry have confirmed, for the first time, the highly controversial theory that some vaccines could allow more-virulent versions of a virus to survive, putting unvaccinated individuals at greater risk of severe illness. The research has important implications for food-chain security and food-chain economics, as well as for other diseases that affect humans and agricultural animals.

"The challenge for the future is to identify other vaccines that also might allow more-virulent versions of a virus to survive and possibly to become even more harmful," said Andrew Read, a leader of the research team whose paper describing the research will be published in the July 27, 2015 issue of the scientific journal PLoS Biology. Read is the Evan Pugh Professor of Biology and Entomology and Eberly Professor in Biotechnology at Penn State University."
https://science.psu.edu/news/some-vaccines-support-evolution-more-virulent-viruses
OP

June 10, Pakistan: "The Punjab government on Thursday decided to block the SIM cards of people refusing to get vaccinated against the coronavirus, an official said."
https://www.dawn.com/news/1628625/punjab-govt-decides-to-block-sim-cards-of-people-refusing-vaccines

We really are seeing a range of responses here. How is that supposed to help?

Lila said:
We really are seeing a range of responses here. How is that supposed to help?
Click to expand...

i guess it is making damn sure that these people also dont get sick from emf's either!
Reactions: Lila
OP 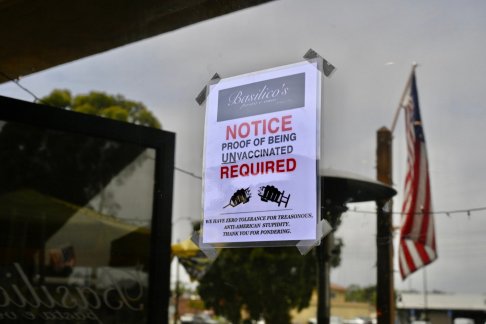 What's with the headline? This is Vanity Fair.

Restaurant That Probably Spits in People’s Food Says It’ll Only Serve Unvaccinated Customers
“From day one, [we have] never complied, banned masks, and now [are] requiring proof of being Un-vaccinated!”
https://www.vanityfair.com/news/2021/07/basilicos-pasta-e-vino-unvaccinated
OP

I'm not sure where else to put this one at the moment. It's not clear why 36% of this Airlines flights are cancelled but we know that the vaccinations have been causing cancellations with flights because of health issues with pilots. (shared by Clif High originally)

SPIRIT AIRLINES COLLAPSES: RIOTS BREAK OUT AS AGENTS TOLD TO FLEE AIRPORTS FOR THEIR OWN SAFETY
https://liveandletsfly.com/spirit-airlines-collapses/

Interesting article about ADE and what the NIH knew:

The Smoking Jab: Fauci and the NIH Knew Covid-19 "Vaccines" Could Lead to Antibody-Dependent Enhancement

BREAKING! Friday, August 13th, 2021, 5:57 PM New York: I found yet another shocking evidence was found on NIH's website this morning. I just published the arti