Upside-Down Rainbows And Their Meaning (1 Viewer)

Upside-Down Rainbows And Their Meaning
Have you ever seen a rainbow upside down? Did you know what causes them to appear? Have you wondered about their symbolic meaning?

“The spiritually inverted rainbow addresses itself precisely to the human soul who, having fully developed his consciousness via the kingdoms of cosmic evolution, now finds himself, in an excessively human or non-natural world, ironically inverted vis-à-vis the spiritual planes through which he must ascend via involution: Having achieved full consciousness as man, he has already arrived at his destination, for he now possesses the capacity to become fully conscious of his Soul. Besides representing the seven planes of consciousness, these colors also represent sanskaras. The colors, inverted, signify mans rise from the grossest of impressions of lust and...
Click here to continue on to the original article. You will be able to comment using a Disqus account (www.disqus.com) if you are logged in with Disqus.
Last edited: Jun 10, 2017
Social Media: Facebook | Telegram | YouTube | Rumble
Lighthouse at the Oasis: Facebook | Telegram
My Services: laron.nz
Reactions: Anaeika, Don Hicks and Stargazer

Yes, I have seen this rainbow, the first time in Sedona, Arizona after a powerful meditation on Bell's Rock (considered to be a vortex). I was with a lifelong girlfriend who was also in meditation at the time, and we marveled at this odd rainbow, something neither of us had seen before. The sun was nowhere near it, and in fact, the sun was not visible. While staring at it, a shaman from South America seemed to appear out of nowhere, and he confirmed it was indeed a good omen, and then he sang to us for quite some time. He gave us a CD of his work.

The next memorable siting was at the Sun Circle (a stonehenge-type sculpture but much smaller) when a holy man and I were there to pray and meditate for peace on our own. We were so focused at one point, I almost felt that gravity had changed. There are often ceremonies there, but we both felt moved to do a private one. The rainbow siting was his first. Again, a good omen in my humble opinion. r

I am grateful to read even more about this. I had researched this phenomenon after the first siting. Thanks, Laron.
Reactions: Don Hicks, Laron, Lila and 1 other person

I saw one around the sun the other day, which I believe are called sun dogs. If you see them as a partial sun dog (bottom piece) they can look inverted like the pic above, so I don't know if folks would put them in the same category. It was there for the afternoon, less whole circle, then more with stronger colours, varying with the conditions. I enjoyed it without taking pics.

The next day, we had an unusually strong wind, with mostly clear skies throughout. They felt distinctly like the winds of change. I don't necessarily know what that means but they were so strong and had a random factor with gusts and things being knocked over that I had some initial anxiety about it. And I have always loved storms! Then, I realized that, whatever change is coming, some of us are well equipped and that there is much comfort in that. That was a takeaway that made me relax and smile

This was today over my pool in PA. Also the small circle right underneath it 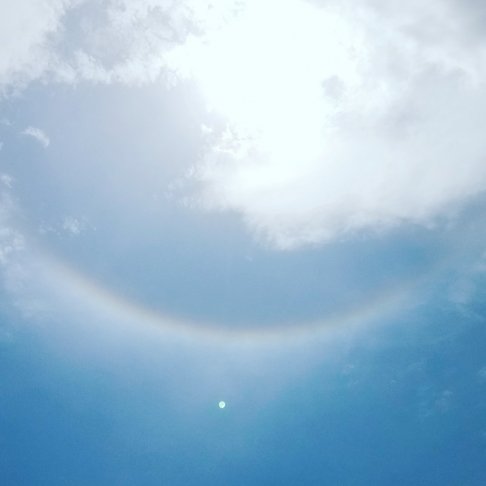 This is an old article!

Sugarshayred said:
This was today over my pool in PA. Also the small circle right underneath it
Click to expand...

Sugarshayred said:
This was today over my pool in PA. Also the small circle right underneath it
View attachment 7541
Click to expand...

I googled upside down rainbows and found the same info as Laron, also I noticed a spot on the videos which appeared to move with the camera, so I’m wondering if the spot in your photo is coming off of your camera, Sugarshayred
Reactions: Laron

reminds me of a partial sun halo
Reactions: Lila, June and Laron

Alain said:
reminds me of a partial sun halo
Click to expand...

I think so too!
Laughter is the sound of my soul.

Reactions: Lila, Linda, Alain and 3 others

I have seen one, I think all rainbows are magical you can really let your imagination run wild.

A rainbow theme could be an idea for the Remote Healing Group, Lila.
Reactions: Lila, Laron and Anaeika

Wow! I missed this article years back. Thank you for bumping it. Rainbows have a special meaning for me because I have been seeing a lot of them since my dad crossed over. Have not seen an upside down rainbow...yet. I will be looking.
I am my potential.
Reactions: Lila and Laron

When I saw my first upside down rainbow, it was actually a full circle - they were conjoined!
Vibrate in accord with the universal notes​
​
I see it's time to change my signature message. Out with the old and in with the new! ​
Reactions: Laron, Lila and Anaeika
You must log in or register to reply here.
Share:
Facebook Reddit Pinterest Tumblr WhatsApp Email Link