Tracking Moving in the USA (1 Viewer)

A research group looked at the temporary and permanent address changes filed with the postal service in the US - close to 16 million between February and July, which reflects a slight increase of permanent moves from the same period in 2019 and a whopping 27% increase in temporary moves.


The most significant outlier in the USPS data was the parabolic spike in temporary address changes, mostly due to city-dwellers escaping large metros during coronavirus lockdowns. ​
​
Besides USPS data, MyMove also examined a Pew Research Center survey of 10,000 Americans conducted in July. The study allowed MyMove to understand why and where people moved. ​
​
"About a quarter (28%) told us [they chose to move] because they feared getting COVID-19 if they stayed where they were living," said D'Vera Cohn, senior writer and editor for Pew who published the study findings, told MyMove. ​
​
"About a fifth (20%) said they wanted to be with their family, or their college campus closed (23%). A total of 18% gave financial reasons, including job loss," Cohn said. ​
There are plenty stories about people fleeing New York and California, but I found the destinations to be of most interest. Knowing the areas listed in Texas, I can tell you that they are smaller towns surrounding the larger cities such as Dallas, Houston, and Austin. So why the satellite cities? Housing costs might be the first guess, and to some extent it is a factor. People coming from California are astounded at how much more house they can get for their dollars. Yet, housing in these smaller cities is not exactly cheap. Why else? Schools are definitely a factor because the systems in the bigger cities are notoriously troubled.

Still, I think there is another factor - community. There is a development style known as live-work-play, which means that people live a more community based life. At present there is a push in many cities to do just the opposite and increase the density by eradicating traditional single-family neighborhoods. On the surface, the reasoning seems Ok, but in practice it is awful. Streets are lined with cars, schools are over-crowded, people don't form relationships with neighbors .... and ..... in the event of some kind of epidemic, the higher density contributes to the spread. In other words, just the scenario these people are fleeing.

The long-term effects will be interesting. 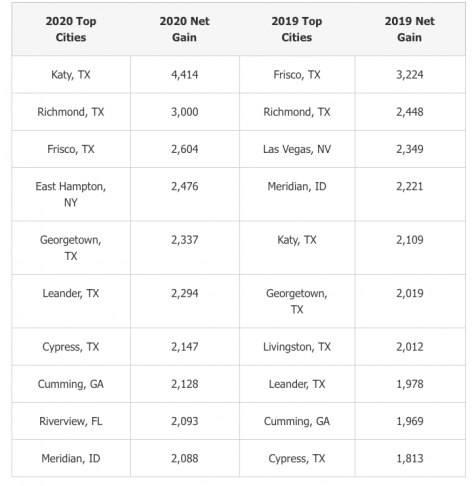 Everybody all around the world - Gotta tell you what I just heard
There's gonna be a party all over the world
I got a message on the radio - But where it came from, I don't really know
And I heard these voices calling all over the world
Electric Light Orchestra
Reactions: Angela

Linda said:
There are plenty stories about people fleeing New York and California
Click to expand...

Reminds me of a vid I saw a few days ago from a YT videoblogger who normally uses his channel as a critic of Hollywood entertainment and pop culture in movies and TV shows such as Star Trek, etc.

He is leaving California like many due to 'unlivable' conditions in this city and area. Many are leaving mostly cities ruled by 'Democrats'. It's a real mass exodus.

Most doctors continue to practice with comfortable indifference. Some see the errors, damage, and limits of their practices but still walk lockstep with the herd and protect the brotherhood. I don’t know what it will take to get these doctors to resist the dictates who rule over them. I’ve had far more success reasoning with parents and intelligent people who are not attached to traditions that are damaging, unscientific, and not even supported by our own medical literature. - Dr. Suzanne Humphries
Reactions: June and Linda
You must log in or register to reply here.
Share:
Facebook Reddit Pinterest Tumblr WhatsApp Email Link