This Is What Disclosure Looks Like (secret space program) (1 Viewer)

Has anyone watched this in full?

Description: "Randy Kramer talks with Jay Weidner to discuss his background serving in the Secret Space Program and his time on Mars. In that he describes the mechanics around the weapons he used as well as age regression. Then Randy tells us how they plan to roll out disclosure. He says that at the end of the disclosure process we will be living in a new world where there will be peace and we will trade and have contact with many galactic races."


It was posted in April this year and is focused around the secret space program.

I'm just wondering about everyone's opinion on the authenticity of it.
consciousness.life | laron.nz | facebook.com/laron
Reactions: Tristan

Isn't Randy Kramer the guy who once claimed he was stationed as a soldier on Mars and fought some bug like ETs there and it could get messy sometimes? Reminded me of ...

Seriously, this man seems to be all in the Corey Goode category for me.
Let your Truth be Authority rather than Authority be your Truth. - Sinera Arenis
Do or Do Not. There is no Try . - Master Yoda

Most doctors continue to practice with comfortable indifference. Some see the errors, damage, and limits of their practices but still walk lockstep with the herd and protect the brotherhood. I don’t know what it will take to get these doctors to resist the dictates who rule over them. I’ve had far more success reasoning with parents and intelligent people who are not attached to traditions that are damaging, unscientific, and not even supported by our own medical literature. - Dr. Suzanne Humphries
Reactions: Jenniflower and Laron

One thing I think most can agree on is that we, the minions, know little about what our governments have been up to. I know Randy has been around for awhile and has been interviewed by many. The masses will not know for sure unless some news person goes to the moon to verify the presence of bases.

I can see how governing people would be behind an idea like this because it does solve the problem of uniting people that are so far apart right now. Still, the insectoid war - can't say I like that idea because of unintended consequences. I think about species that were transplanted to other continents to combat some problem, but then created a larger one. Yet, I can see how it would be the fast track to moving the population along. (Also, several of my friends and I have fake alien invasion on our 2020 bingo cards.)

Does anyone know if Farsight or any other remote viewers have seen something smiilar to what Randy says?

(I watched the entire thing yesterday and tend to agree with Sinera in terms of it having that Goode/Wilcock energy which I don't feel is fully accurate.)

However, there may be truths in there such as an upcoming Alien invasion, which is mentioned by both the webbot and that book and documentary Unacknowledged.

Going by memory the webbot shows it's real ETs being here, but not posing too much of an issue, and this happens after the Global Coastal Event, which is COVID-19.

Greer in Unacknowledged says it's a fake invasion if I remember right, so ET technology being used to fake an invasion.


Linda said:
but I'm not stocking up on MREs.
Click to expand...

I did that once, won't be doing it again! I live in the moment and keep pushing myself to become more in the moment.
Reactions: Jenniflower and Tristan

I wish for that fake alien invasion actually to 'happen'. It could be interesting to see how pandemic believers will fall for that one, too. And to see how the two extreme sides in our society (scientific materialism on the one and dogmatic religions on the other) would react to it. They might go nuts. I'd love to see that since I have grown pretty sarcastic lately during this zombie apokalypse we already have on and meanwhile I see this temporary ('transient') earth reality experience as an entertainment show or movie more than taking it too seriously anymore.

I talk with alot of people who claim to be SSP vets. I also have memories of visiting the red planet. For me this is where stuff really starts to get interesting and much much closer to the true disclosure of crimes against humanity. It's a tricky field to navigate. I've always said "the truth lies within the experiencer" trouble is with technology capable of erasing memories and inserting alternate ones, capability of inserting consciousness into alters or avatars. These programs have become humanity's best kept secrets. Disclosure is coming no doubt, and when it does humanity as a whole will be shocked to a stand still before making the biggest evolution jump ever! I'm always cautious when I chose to engage in high profile "experiencers" such as C.G or Kramer as it raises alot of red flags and I dont wish to be piggy backing or influenced about what i believe to be true or not true. I dont tend to watch/listen to too much of this kind of stuff because I find it misleading. Without watching this vid I'd say its (like most) a mixture of truth with fiction. More fiction than facts and engineered in such a way that serves a purpose not likely for the people. A way of preparing humanity for what's to come. This is where I'm greatful that the subconscious is all powerful and all knowing and cannot be rewritten or wiped completely. I feel many of these whistleblowers "remember" for a reason and that isnt to say their memories are even accurate. Why would the powers that be allow such individuals to disclose such information? These are critical questions one must ask when discerning this type of information as this rabbit hole runs deep and there is an endless possibility of channels to get lost in.
Reactions: Jenniflower and Laron
OP 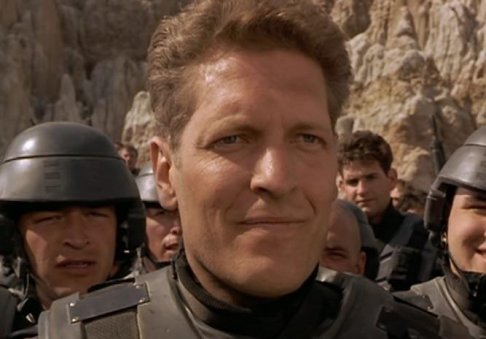 I, for one, am in support of THIS kind of alien invasion:
Hitchhikers Guide to the Galaxy...
or join this cool group

Seems possible that this "alien" invasion may be the one to stop pending wars, forcing everyone to look up, drop their weapons, and walk away.
Reactions: Jenniflower

I might already know the answer, but I'm curious... How will we know if it's a real invasion or a fake one?

Angela said:
I might already know the answer, but I'm curious... How will we know if it's a real invasion or a fake one?
Click to expand...

Why should it be 'real'? Any aliens who are here are so advanced they could beam us away and take the planet in an instant. No big show in the sky bombing our major cities with tachyon or laser beams needed. No ground troops of buglike supersoldiers either. That's Hollywood.


Moreover, I do not believe that "they" can and will pull this off. To control the sheep or start their wars they already have enough tools, be it false terrorist flags or fake pandemics, corrupt politician puppets etc. They don't need THAT. And they could not do it. I do not believe in this. It also would be too much due to the double shock. Most people would have to digest that ETs exist and are around us and then the invasion story would be too much to handle.

However I would modulate a possible false flag operation logic using a common 'official disclosure' as such:

Fake Alien Invasion Hoax not taking place:
1. Aliens exist
2. They are here
3. They are invading us right now

Last night I listened to an absolutely fascinating qhht by Suzanne Spooner where the person was explaining how in 1994, an alien invasion literally did happen. Killing about 60% of the population. Completely Meaningless within the scope of our paths on earth. This person in the qhht sent a distress call to the Acturians, who helped call in reinforcements to fight the battle. Then they proceeded to wipe human consciousness memory to forget the entire event. The first time this was ever done.

They apparently did a rewind to one second before it happened. So we lost one second of our time.


Anyway. Your points are good. I honestly don't think they could pull it off, either. It is an extremely massive undertaking. And given the chaos theory, they could not prepare for all the contingencies. Plus, in the end, it would just make it more of a show as to how we've been lied to.
The bigger the lie, the bigger the consequences.

With all the movies and TV shows coming out about time travel, alternate timelines, and paradoxes (Terminator, Tenet, Terminator Salvation, Avengers Endgame, etc.), plus all of our experiences with Mandela's effects and bridges across timelines, I wouldn't be surprised that an alien invasion did happen on...say.... Earth-52. Just as Laron had indicated that the 2012 ELE event did happen, but on a different timeline (our energies had ascended high enough that we avoided that outcome), same thing here.

Looking at "Independence Day" wiki, a snippet jumped out:
*****
While promoting Stargate in Europe, Emmerich came up with the idea for the film while answering a question about his own belief in the existence of alien life. He and Dean Devlin decided to incorporate a large-scale attack having noticed that aliens in most invasion films travel long distances in outer space only to remain hidden when reaching Earth. Shooting began in July 1995 in New York City, and the film was officially completed on June 20, 1996.

Now considered a significant turning point in the history of the Hollywood blockbuster, Independence Day was at the forefront of the large-scale disaster film and sci-fi resurgence of the mid-late 1990s.
*****

If you look at the timing, it is quite possible that this "alien invasion" in 1994 may have left an imprint on our subconscious, as "Independence Day" was conceived in 1994 during Stargate movie's promotions. And look at the last sentence in the snippet.