These Are The Times That Try Men's Souls (1 Viewer)

Revolutions are all around us - from the personal to national to global. So many of us are tired, yet we get up each day and carry on. Our county finally lifted the mask mandate. Today I was in stores, and several times I felt moved to give people a big smile - and - they smiled back. We were happy with the reclamation of a lost freedom. Although I'm not doing big things like speaking out at council or school board meetings, I do share my dreams and offer support.

Many of us in the USA feel as though we are going through another revolution. During Paine's time, social media was handing out printed pamphlets on the street and discussing the ideas at taverns.

American Crises, which includes the following paragraphs was written at a time when many of the revolutionary troops gave up and went home, and General Washington lost several battles. Washington had these words read to the troops before they made that famous ride across the Delaware River where they were able to take the fort. I happened upon them again this evening, and they spoke to me - 245 years later.


These are the times that try men’s souls.
The summer soldier and the sunshine pat 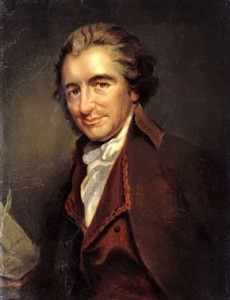 riot will, in this crisis, shrink from the service of their country; but he that stands it now, deserves the love and thanks of man and woman.

Tyranny, like hell, is not easily conquered; yet we have this consolation with us, that the harder the conflict, the more glorious the triumph.

What we obtain too cheap, we esteem too lightly: it is dearness only that gives every thing its value. Heaven knows how to put a proper price upon its goods; and it would be strange indeed if so celestial an article as FREEDOM should not be highly rated.


Thomas Paine was an interesting man. He certainly had a way with words, penning the Federalist Papers, Common Sense, and American Crises during the American Revolution.


Paine arrived in Philadelphia on November 30, 1774, taking up his first regular employment — helping to edit the Pennsylvania Magazine — in January 1775. At this time, Paine began writing in earnest, publishing several articles, anonymously or under pseudonyms. ​
​
Within five months of Paine's arrival, however, the precipitating event to his most famous work would occur. After the battles of Lexington and Concord (April 19, 1775), which were the first military engagements of the American Revolutionary War, Paine argued that America should not simply revolt against taxation, but demand independence from Great Britain entirely. He expanded this idea in a 50-page pamphlet called "Common Sense," which was printed on January 10, 1776.​
​
Worded in a way that forces the reader to make an immediate choice, "Common Sense" presented the American colonists, who were generally still undecided, with a cogent argument for full-scale revolt and freedom from British rule. And while it likely had little effect on the actual writing of the Declaration of Independence, "Common Sense" forced the issue on the streets, making the colonists see that a grave issue was upon them and that a public discussion was direly needed. Once it initiated debate, the article offered a solution for Americans who were disgusted and alarmed at the presence of tyranny in their new land, and it was passed around and read aloud often, bolstering enthusiasm for independence and encouraging recruitment for the Continental Army. ("Common Sense" is referred to by one historian as "the most incendiary and popular pamphlet of the entire revolutionary era.") ​
​
Paine wrote "Common Sense" in an unadorned style, forgoing philosophical ponderings and Latin terms, and relying instead on biblical references to speak to the common man, as would a sermon. Within just a few months, the piece sold more than 500,000 copies. "Common Sense" presents as its chief option a distinctly American political identity and, more so than any other single publication, paved the way for the Declaration of Independence, which was unanimously ratified on July 4, 1776.​
​
During the American Revolution, Paine served as a volunteer personal assistant to General Nathanael Greene, traveling with the Continental Army. While not a natural soldier, Paine contributed to the patriot cause by inspiring the troops with his 16 "Crisis" papers, which appeared between 1776 and 1783. "The American Crisis. Number I" was published on December 19, 1776, and began thusly: "These are the times that try men's souls." George Washington's troops were being decimated, and he ordered that the pamphlet be read to all of his troops at Valley Forge, in hopes of inflaming them to victory.​

Thomas Paine was an English American writer and pamphleteer whose "Common Sense" and other writings influenced the American Revolution, and helped pave the way for the Declaration of Independence.

www.biography.com
Last edited: Jun 11, 2021
Everybody all around the world - Gotta tell you what I just heard
There's gonna be a party all over the world
I got a message on the radio - But where it came from, I don't really know
And I heard these voices calling all over the world
Electric Light Orchestra
Reactions: Lila and One65

I think it can be said generally that the cosmos throws up the solution to any problem at the same time the problem arises. Time may pass between the problem and the solution, but the only reason is the solution hidden in plain sight in the most natural way in the hologram is not perceived soon enough - the lens of understanding is either too near or too far to permit instant recognition. Perhaps this is why meditators and seers are needed.
Vibrate in accord with the universal notes​
​
I see it's time to change my signature message. Out with the old and in with the new! ​
Reactions: Linda
You must log in or register to reply here.
Share:
Facebook Reddit Pinterest Tumblr WhatsApp Email Link