The Water World and the Cliff of Ascension (1 Viewer) 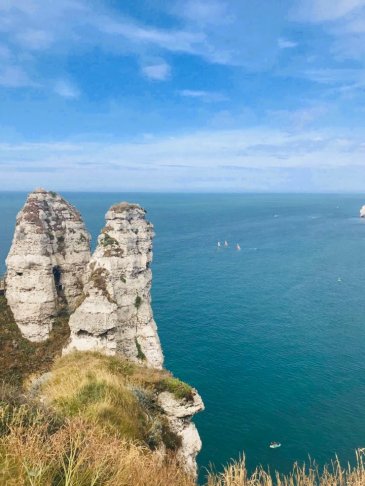 The Cliff of Etretat, here where I live. I have been there during this year 8/8 Lion's Gate

Last night out of body experience.

I don't know if this was a vision of the current spiritual human ascension or a kind of a message to understanding the forms and ways humans are choosing now to learn and grow from their spiritual ascension into 5D and more. But it sounds like it is !

So here is the vision I had.
I was in a land of water surrounded by a blue ocean and perched on a high place I could go to using my astral body in that realm. I was an energetic being. I stood on a high mountain incrusted in the ocean, it was made of green large stairs. I had to go up many times to watch over the other mountain standing in front of my seen, and on the top of which there was a land made of sand that could collapse at one time or another. I felt like this was the type of feeling humans could have when they are ascending on 5D. Every thing could collapse inside the self at any time including the fact that humans are very unstable beings at a spiritual level.
My work was to send a huge wave of light to that place so that the sand could be transformed to a solid big rock. I did. The rock had to be taken care of anyway. So the guides from the spirit world came to help me too and we opened a portal inside the rock with a sophisticated program. We had to keep in touch with the flows of waters and the waves coming from the Ocean below, so that they can nurture the mountain in a movement going from bottom to top. The water wasn't moving, it was only its energy that was doing this great job.
When I was said that it was finished, I left the place feeling intrigued by this vision. It was more than a vision... An astral projection to the Water World and the Mountain of Ascension. This place is real. I don't know where it is in the immense universe, but it is the place of guidance form humanity now. From the land all energy waves and upgrades are taking place.
I was shown this place to bring back a message :
"No matter how high people can go on their journey through their spiritual ascension, the most important is to stand on a solid ground !"
It doesn't mean that we have to ground more, but we have to follow our spiritual journey being sure and in the understanding of what we are experiencing. One is not obliged to follow others, but to build own mastery. 5D and more are not real physical worlds, they are made of waves and frequencies, the human vessel integrates once the understanding has been also integrated. If not, the sandy top would fall down and its energy will scatter everywhere in the waters, helping again the transmutation of souls.
What do you think ?
Reactions: Alain and One65

On the right hand pillar facing inward to land, I see a woman with head, body, bust, shoulder and arm. Above her, I see two beings, with faces, almost like they are guarding her.
Vibrate in accord with the universal notes​
​
As long as bribery, intimidation, threats and blackmail are used to enforce public health, there is no real public health (Lisa Renee, creative commons 3.0 BY-SA, www.energeticsynthesis.com) July 2020​
Reactions: Henda
OP

Those are the spirit s of the cliff. I met them on astral at least two times
Reactions: Hailstones Melt

Henda said:
Those are the spirit s of the cliff. I met them on astral at least two times
Click to expand...

I have met a stone being in the astral (fluid dreaming), perhaps I have an affinity with them.
Reactions: Henda
OP

Those I met were made of light. I guess they are the true spirits of those cliffs.

Henda said:
Those I met were made of light. I guess they are the true spirits of those cliffs.
Click to expand...

What I like is how the beings are all smiling. They have a great view from there. Is that the Mediterranean?
Reactions: Henda
OP

It’s La Manche Sea here in France Haute Normandie
This city is called Étretat and is very well know’ For its high cliffs
People come to visit from around the world
Reactions: Hailstones Melt
You must log in or register to reply here.
Share:
Facebook Reddit Pinterest Tumblr WhatsApp Email Link