The Empress of Uruguay: Largest Amethyst Geode in the World (1 Viewer)

It resides at the Crystal Caves Museum in Atherton, Australia and was discovered in the Artigas region in northern Uruguay — a mining area famous for yielding some of the world’s finest-quality amethysts. 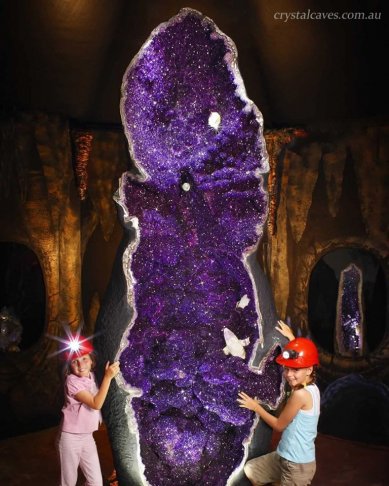 ​
Crystal Caves Museum founders René and Nelleke Boissevain purchased the geode for $75,000 in 2007 and paid an additional $25,000 to transport it from Uruguay to Queensland on Australia’s northeastern coast. The Crystal Caves Museum is located just an hour from the Cairns International Airport on the beautiful Atherton Tablelands.

As for its properties, it can work similar to a cluster, and is effective at radiating energy into a wider space, with the amethyst being a good option to use at the entry to a room for that reason, since it not only attracts positive energy, but clears away negative — including emotions such as stress, anxiety and fear. As well as helping to clear the human energy field of negative energy, it can act as an energetic shield around the body.

As early as 10,000 BC the Neolithic people of Europe, and the ancient Egyptians, prized the amethyst for its legendary energy and beauty. Roman and Greek societies placed it in high regard because of its healing powers. It was considered as a gemstone of royalty, having been used in scepters, crowns, and the rings of bishops. The name 'Amethyst' derives from the Greek word, ‘ametusthos’, meaning 'not intoxicated.' It was also known as, 'the gem of fire’ by the ancient Greeks.

In addition to soothing emotions and providing protection, it can bring inner strength and clarity. It’s a great mediation stone, helping one to get to know themselves easier and deeper.
Social Media: Facebook | Telegram | YouTube | Rumble
Lighthouse at the Oasis: Facebook | Telegram
My Services: laron.nz
Reactions: Sam Vause, Alain and Lila

I think that's now on my list of 'want to see before I die' places.
Reactions: Alain and Laron
OP

The next time I'm in that state (and country), I will have to visit!
Reactions: Siggie and Lila

I once took a 5-day Greyhound bus trip all the way from Broome, Western Australia (Kimberleys) through NT, through to Mount Isa and across to Cairns, and I hired a car and drove up to the Atherton Tablelands. It's a pity this was all well before 2007, so I missed the opportunity to see this magnificent crystal cluster. I should say it is a "must do".
Vibrate in accord with the universal notes​
​
I see it's time to change my signature message. Out with the old and in with the new! ​
Reactions: Siggie, Linda, Lila and 1 other person

Well the largest i saw in person was between 0.5 and 1 meter in height. Pretty things
Reactions: Lila
OP

Alain said:
Well the largest i saw in person was between 0.5 and 1 meter in height. Pretty things
Click to expand...

That would have been a nice experience.
Reactions: Lila

no longer there as a truck ran in the building at a time ago to rob the place, but was perfectly near the entrance where a visit is started
Reactions: Lila

Alain said:
no longer there as a truck ran in the building at a time ago to rob the place, but was perfectly near the entrance where a visit is started
Click to expand...

You could say, "The gremlins got to it."
Reactions: Lila

That's odd I see this today, and it's 10:01! In a few weeks I will be going to a mine which has many amethysts, and LOTS more quartz. It's certainly possible I could come home with 10-20 lbs of quartz. You dig it, you keep it. Can someone explain how amethyst is healing and how to use it? My intuition is telling me I will find some amethysts at this mine and will have to give some away, not that I mind.

The mine is just a big sandy area outside. We pay someone to go there, bring all our own tools, and dig. There are videos of Diamond Hill Mine on Youtube.
"When you censor a person you do not prove him a liar, you prove you fear what he has to say."
Reactions: Lila and Laron
OP