The Crystal Cliff: An Astral Projection To Sirius B (1 Viewer)

Some of my trips in Sirius A & B

I have been astral projecting to Sirius many times since the last two years. Sirius is my home place where my soul came to life. I have been underground sometimes and saw beings with dolphins heads, and others who are all white headed. They are keepers of the cetacean souls who incarnated on earth as benevolent beings of light to help the new earth come from the old one. Cetaceans have a communication system that allows them to bring the highest frequencies to help us and help around all living beings during this shift in consciousness.

People who are not connected to nature and to the cosmic energy flowing in and outside us, cannot understand what I am writing here. So I am not judging anyone's belief system, and ask for respect in return to the visions I have during my astral projections.

We don't carry the same blueprint. And that's why we don't channel the same information and don't have the same guides, and we also don't go to the same places when we astral project. This is given for us for a good purpose which is to share information and get a mixing of it to reach more and more the knowledge that is stored in the multiverse for us.

So that's why I share here. It is not to show people that I am more evolved or more spiritual. It is part of my mission because I know now why this has been given to me. We are here to share our experiences and to expand as conscious beings of love.

And yes ! The more we are love and the more we are conscious of our astral projections because we are free from all the negative elementals that may keep us slaves to our physical.

During the last two years, I shared here some of my AP to Sirius A & B.
Sirius A, is well known with the frequency coming from the felines' akashic. I had some encounters with lions and even received their energy to attune my bodies. This is given to us to share it too. And it is very obvious in my writing, my energy and all my art if you can tap into it !
I have a huge lion in me.
I also have a big dolphin

Sirius B, is the place cetaceans have their akashic records and this is where their souls travel when they leave the earth. It is the same process with the felines.

Felines are on earth to bring their frequency too as the cetaceans. The more we understand the frequency of these beings, and the more their mission and energy become clear for us. That's why we have to protect them.

Here is the soundtrack by Eric Serra of The Big Blue a french film by Luc Besson ! I really urge you to watch the film too as may be it is available on Youtube . I recommend that you listen with head phones to really tap into Sirius B energy.

Last night it was on a channel on TV here and I enjoyed watching it again. One of my favorite movies as I guess it was a sign for me to write this article which is what I am doing. It was broadcasted on TV 13 days exactly after my Astral Projection

The Astral Projection To The Crystal Cliff

The planet or that part of it, was bright blue like our sky when sun is shining. I was with many people who were beings from there and looked like coming from old ages. We were walking on a huge blue crystal cliff which had the same frequency and color of the planet and underneath was a crystalline sea but solid or gelatinous. It was in between water and solidity. That was the energy core of Sirius B from where all have been brought to life including Sirian starseeds who incarnated on earth too.

The cliff was expanding spread over miles. The sky and the ground were like one with the same blue invigorating energy which reminded me of the one we may find in some wild places near the sea on earth when you go there early in the morning for a walk !

I was with my son and my daughter. We were walking there. I understood that they were also starseeds from there. We were walking on that cliff to reach a place with constructions that were an archeological site of a very old city. It was a place we go on Sirius to relax. The crystalline energy that flows there is sky blue very near of the topaz crystal too. It was in between clear blue and topaz energy. All the star was filled with this energy and expanding to the infinite !

The White House and The Akashic Frescoes

We arrived to a white house which had many broken frescoes. It was the remaining traces of a war that took place many times ago. The frescoes were made of a material resembling to white lime. Inside them, there were portraits of paintings and sculptures of being who looked like humans and who lived there for so long many centuries ago. There were family life scenes, and life family destruction from wars. The frescoes were the akashic of these beings who were all starseed from Sirius A/B.

Many of them are now incarnated on earth and have in their souls a trace of these ancient lives. Their mission is to work energetically to stop any kind of war and destructive habits. They are most of them healers with many gifts and inner potentials that will show up more and more to them during their human incarnation now.

When taking one of these frescoes I could download instantaneously the information that was stored in it about the beings who lived there, their lives, their culture etc...

That was fascinating but kind of normal on Sirius at that specific place.

When I walked further I met one of my two brothers who is also a sea and cetaceans' lover since he was a child. He had a son and was talking to his him because he broke a common law.

I learned that in that community it was clearly forbidden for teenagers to have babies. The child who comes to life had to be raised by the young fathers' family. It was an information about the culture of the past community I saw on one of these frescoes. It is very frequent in dolphins communities that the new borns are raised by a female group of the same cluster.

It sounded like they had their morals and ways of behaving that made me think of what has been going on in some human communities too.

When we incarnate on earth we come with our akashic which include our ways of thinking and behaving, our morality and visions and views.

It is not only an earth heritage, but coming from other starseeds' communities we have been living in during our past lives.

Back in my Physical : The lesson
I came back in my physical body holding that energy in me and it was burning me like fire. My hands were burning too because I was in direct connection with some of the akashic records from that place. I took time to adjust and took also notes about my AP.

What we learn from our past lives may show up in our current incarnation too. It may come to anyone to help at a spiritual level. Our thoughts dictate our behavior. Our moral principles are not the result of our incarnation on earth, but come from very far and ancient lives.

In coming here on earth with these memories we are also guided to work on them in many areas of our life including war, violence, political principles, spirituality and so on.

Our past wounds may become our earth shape and ways we behave with / from. They are not given to us to cause us pain and be always complaining and sad. They are given to us for learning and to heal ourselves from them.

Sirius is a very bright star which has a spiritual and divine presence in the night sky and in our hearts. When we are from there we can feel its effects on us.

I had a very urgent message of peace during this Astral projection as what happened there also happened on earth many centuries ago with the Greek and Roman cultures, with also the american natives, the old cities of the Mayans, Incas, Babylone and many others.

These are all lessons given to us to break free from hatred, war and all other kinds of violence we are living now.

The current shift includes unconditional love and a lot of energy cleansing ! 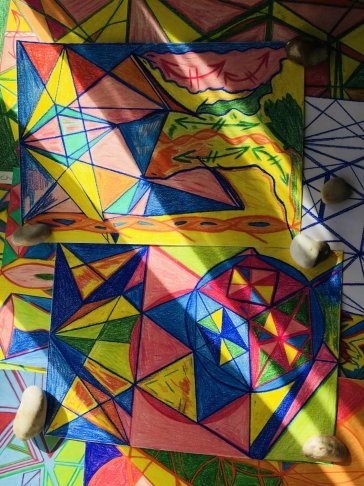 Henda said:
Our past wounds may become our earth shape and ways we behave with / from. They are not given to us to cause us pain and be always complaining and sad. They are given to us for learning and to heal ourselves from them.
Click to expand...

Sounds like a message of HOPE.
Thank you, Henda .
I am my potential.
Reactions: Carl, Pucksterguy and Henda
OP

Yes a huge message of hope actually and to stop violence and wars
to protect the animal kingdom and bring them back to their original frequency
Reactions: Carl, Pucksterguy and Anaeika

The rays of light add another dimension to your drawings.
OP

Anaeika said:
The rays of light add another dimension to your drawings.
Click to expand...

Yes they open new multidimensional portals from the connection to the Central Sun
Reactions: Carl and Anaeika

I wonder if you put all of your pictures together that it will reveal one large picture??
Reactions: Carl
OP

Anaeika said:
I wonder if you put all of your pictures together that it will reveal one large picture??
Click to expand...