Summary: Feeling boxed in doesn’t suit you at all. It can happen without you even noticing it. Even though you have a lot to be proud of, to allow what you’ve manufactured to continue to define your boundary is to deny your true calling. Already you feel the pull in a new direction. It’s all set, ready for you to enter into and to take up the tools waiting for your capable hands. Find your poise and with it, the will to take the reins of destiny. You do well to be in sync with what’s carrying you into what’s next. Settle into the joy of it, and trust it.

Four of Pentacles — The Emperor (reversed) — Six of Rods 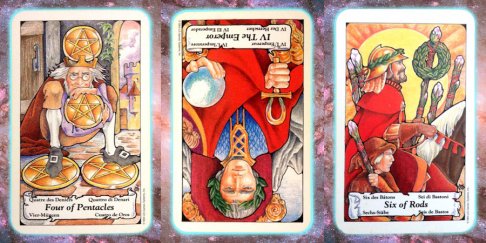 The fact that you’ve been getting good what you do is evidenced by what you’ve built as a foundation for yourself. It may or may not be the most glamorous of settings, but you can look at it and say that you’ve done something. Maybe you even mastered something in the doing. Chances exponentially increase as you put effort into making something happen. However, it can also happen that the more you invest in something, the more you become entrapped by it. Unknowingly, you can create for yourself a golden cage. The foundations are good and solid, but something is pulling you in a new direction. You might not even be aware of it yet, or if you are, you likely don’t have it in your sights. Not yet. And you won’t until you let go of the machinery of making things happen. The simple fact that you’ve spent time and effort on something does not necessarily mean that continuing to do so is in your own—or anyone else’s—best interest. Can you feel the weight of it yet? Are you aware of how much it’s cordoned off your ability to get a good long view of things, merely by the pressure it’s putting on you to continue as you are? Assess your posture and you might see that your best intentions could have not only limited the width of the window through which you see the world, but also got you stuck in a corner, cut off from the glory awaiting you. It’s still there. It’s time to get unstuck and venture a bit beyond what you’ve done. It’s time to move.

You might not want to take on the role that’s prepared, finding the tools of a new trade too weighty, too unwieldy for your hands. It could be natural for “I don’t wanna” to echo in your head. After all you’ve come through, even you, a little whining is to be expected. What you’ve come to is a point of transition that requires the deepest, most settled aspects of your being to shift dramatically. You can’t be blamed for a little bit of drama, but move past that. Regard it as a puff of dust that rises from the cushion as you settle into place. This seat has been prepared for you, long ago, wrought with the very blueprint of your story. Take a minute to get the feel for what may seem like a precarious position. Get your balance, and recall all that you’ve learned. If you had to distill the secret of gaining balance, the crux is in the alignment of self within the axes of mind and heart. You cannot think your way through this without acknowledging how you feel, nor can you merely blast your way through this moment without considering what it means. A true assessment, now, requires you to take ownership of your full being, synthesized and agglomerated as an emergent authority in your own right. See what’s in front of you and tap into where you need to adjust to gain the balance this point in time deserves. You’re called to your ascendancy. Give heed to the hints that come to impart remembrance of the wisdom you already own.

MOST OMWARD DIRECTION: Six of Rods

All right, you’ve put the distractions to one side, check. You’re comprehensively in control of how you ride the forward-moving change carrying you along, check. You feel confident in the support you have to move with you into what lay ahead, check. Right? Well, it’s there. Best to keep yourself focused, as you’ve been practicing to do. You’ll be fine by keeping your awareness in the full light of this alignment that’s been making itself more insistently known. In fact, you have already won the prize. All you have to do is to carry it with you, to own it, to be what you are called to be. In answering the call, you become that. You’re heading into the limelight, into that arena where, at last, you are recognized for who and what you are. There’s nothing left for you to do to get there, but to settle yourself in and face forward. Once you feel that movement begin, there’s no going back to how things were. What was will cease to be. What beckons you reminds you of what you had carried with you to deliver at your own doorstep, when at last you came to that point of meeting yourself in recognition, remembrance, re-collection. While what lay ahead might, at this moment, feel like going into another world altogether, when you get there, it will feel like coming home. There’s no better feeling than that. Welcome yourself into your own wholeness, triumphant for the trials and lessons you’ve come through. Face forward and feel the light.

“In rearranging your thoughts, you rearrange your reality. Fanciful notions of yourself as a sovereign being who answers to no one are the same as erroneous beliefs in yourself as a victim of a vast and unresponsive hoax of a life. You choose to remain and you choose to change the scenery. It’s all a projection of your mind. Still your mental tyrant with one deft move. Just when you feel the lye burning your lungs, exhale the poison. Inhale nothing but the light of the void of OM, the void which is nothing but OM’s reality-creating range of total possibility and total love.” See what's in front of you and tap into where you need to adjust to gain the balance this point in time deserves. You're called to your ascendancy.

Love
In the moment in which you forgive yourself for being human, you become more fully human, and more divine.
https://ninespath.com
Reactions: Alain, Lila, Manuel and 2 others
OP

Me too. I've been refreshing all the hanging baskets with new soil and new coconut fibre. Normally, I am miles away from having my hands in soil!
Vibrate in accord with the universal notes​
​
Question: How do you choose the higher vibrational energies in any given situation? "You choose by taking the high road, instead of engaging in the same argument that you’ve had several times with the same person. You choose by spending more time in nature and putting away your electronic devices. You choose by being true to yourself and the impulse that you have coming to you from within, rather than just doing what everyone expects you to do, or what your parents did." Quote from the Arcturian Council, posted December 5, 2019​
Reactions: Lila and Maryann
You must log in or register to reply here.
Share:
Facebook Reddit Pinterest Tumblr WhatsApp Email Link