Yesterday I came across an article on stuff.co.nz, New Zealand's most popular MSM website, covering a group of doctors who have spoken out about the COVID vaccines in New Zealand.

As someone trained in journalism, and being an experienced writer and published author, for me it comes off as an opinion piece full of bias and basically "bullshit", as one of my family members said to me after reading it. This post is my opinion piece on that article.

To begin with, the title, The doctors trying to hijack New Zealand's Covid-19 vaccination rollout, is revealing.

It's opening statement, "A group of dissident doctors have joined the ranks of those seeking to undermine confidence in New Zealand's vaccine campaign by spreading misinformation. What are they saying and do they pose a real threat to our Covid-19 response?."

The question asked above is pointless, as the reporter clearly comes to that conclusion using a one sided agenda, or does she? I have to ask the question, has she actually done some personal research of her own and come across the many doctors, scientists, lawyers, Nobel prize winners, and other health professionals who have arrived at a similar conclusion to these "dissident doctors"?

Here I quote Anna de Buisseret, an Employment Lawyer in London from a recent thread I posted that included a video of her attempting to serve papers to the vaccinators. "They constitute crimes against humanity, they are bioweapons. On the evidence, this is a eugenics program — it's genocide. That's the evidence of senior lawyers across the world." She's referring to the vaccines.

This article does have a silver lining as it's quite revealing and eye opening for those of the general public who have no idea that there are real doctors speaking out about the genocide taking place with these vaccines.

Below I've included some excerpts while keeping out the bullshit. There's always two sides to a story.


"On June 14, talkback radio host Peter Williams welcomed Wellington GP Matt Shelton onto his show to discuss the Covid-19 vaccine. Shelton claimed authorities were hiding the truth about adverse reactions to the vaccines.​
​
He said general practice was familiar with giving vaccinations and it was not common to see any reactions. By contrast, the Covid vaccine was “not a walk in the park ... we’re more likely to see patients who have felt unwell.”​
​
Shelton also told Williams the Covid-19 vaccine roll-out was “indefensible in the light of science” and should be stopped as Covid-19 was “essentially an influenza-level illness in terms of death rates and who is hit hardest”​
​
When Williams pointed out the decrease in Covid-19 cases and deaths since the rollout of vaccination programmes overseas, Shelton claimed it was the result of widespread falsification of test results.​
​
“Whilst not wanting to undermine the Government’s objective,” Shelton said, “We feel that the underlying principle ... which is that the only solution is a vaccine programme is incorrect, and we are recommending it be stopped.” Shelton is one of 32 doctors, 100 nurses and 187 allied health professionals who have signed an open letter casting doubt on the Covid-19 vaccine, published on the NZDSOS website in late April."​
The rest of the article is really about attacking these doctors. Doctors who're following their hypocritical oath of doing no harm, where many others continue to be bribed by big pharma while blindly taking part in a vaccination programme that is clearly causing more harm than good.

I'm a member of a number of groups online where adverse reactions to the COVID vaccines are shared by the victims, their family and friends. They are overflowing with posts. As some of you know, I've included a few of these reports within threads on the forum here, such as, People who have died from COVID-19 vaccines, and COVID Vaccine Injuries.

Countries maintain databases of adverse reactions, including death. It's been said by health professionals that only one to ten percent of adverse reactions are reported to these systems. It's also been shown that some of these database are having their numbers and content manipulated and changed, based on people keeping a close eye on them online. This indicates possible corruption and fraud of the true statistics and I think we can take a guess here that they don't want the numbers to be high, to support the vaccination agenda.

Based on many first hand accounts by patients sharing online, it's quite common for doctors to not assign blame to the COVID vaccinations when a health issue arises after injection. They tend to accept it as coincidence and get on with their day.

From a psychological perspective, what tends to happen with a person who is highly educated, is that they can stop thinking for themselves and lose the ability to use their intuition. They don't look outside the box. This occurs with artists for example. So people can become conditioned and the chance is there to blindly ignore evidence and facts beyond the indoctrination.

Therefore this goes towards there being a lower number of adverse reactions reported as they discourage their patients from assigning blame to the vaccinations. But what I hear is that this mentality is changing as more and more doctors wake up and begin to see a familiar pattern forming.

When looking at these numbers, for example, if only 5% of the actual adverse reactions were included, then you need to multiple that by 20.

Here's some raw numbers for you to consider:


Deaths & Injuries for Europe, U.K. & U.S (Combined totals) up to 9 July, 2021:​
Deaths: 598, 680​
Injuries: 65,521,500​
That's just about six hundred thousand who have died from the vaccines and over sixty five million health injuries. (Source links of the above data can be found under the this video on Bitchute.) Just note that I went with the figure of only 5% of adverse reactions being reported. What if it was only 1%?... you can do the math.

Based on science, it can take up to 2–3 years for the vaccines to have an adverse reaction, which is a result of how the spike protein behaves alongside ingredients which can include graphene oxide. This is only the beginning.

In Clif High's recent video I covered, I reported in plain language , "Many doctors that took the vaccine will die, and those who were distributing it that did not take it, and gave it to others will go crazy and/or have retribution occur. So those medical people who were responsible for distributing it are going to feel bad for the rest of their lives. A small number of clear thinking people will know they did their best so will not give themselves grief." Clif is a data mining and future forecasting expert who developed the webbot system. (His homepage and BitChute channel)

So here in New Zealand we have a small number of clear thinking doctors who should be praised. Time will eventually bring praise their way.

Because of the increase in censorship by big tech with free speech no longer existing on many social media platforms, people are forced to have a presence on websites like Bitchute and Telegram. With presidents, politicians, celebrities, popular public figures, alongside the general public, having their accounts suspended and banned on the more mainstream platforms, there is little choice. When a reporter makes a negative point about this, such as in this article, it's really a failed attack on character and shows their ignorance of what is actually taking place in our world. 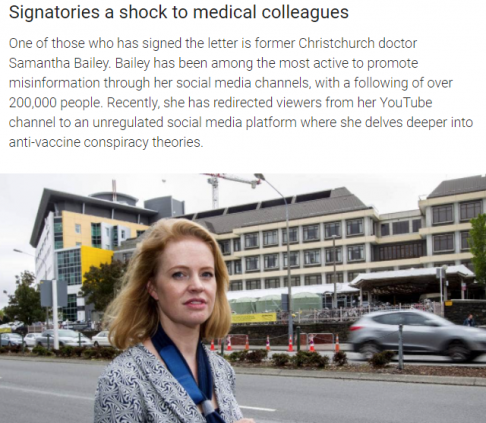 ​
The above screen capture is from the article. The reporter digs into her, trying to rip her credentials apart to make her sound like a doctor we should not trust. But the fact is that people like her, who are using their intuition, need to be taken notice of and not ignored.

Also included in this article is mention of a recent survey of 2,300 people in New Zealand. It said "one in four believed the dangers and severity of the virus had been exaggerated by officials," and that one in five thought lockdowns were about “increasing government control.” That's some awake people if those numbers are true, as numbers can easily be manipulated. We learnt that from the last Presidential race in the USA. Maybe they are a lot higher.

The end of the piece focuses on a doctor "fighting the good fight'. In other words, they featured someone who is supporting their vaccination agenda.

Note that I just finished editing and updating the article to include more information for those that have already read it. (this reply would be 30 minutes after I posted it).
Last edited: Jul 18, 2021
OP

And again, I've returned to doing some editing and adding a bit more. This is about an hour after I posted it.
OP 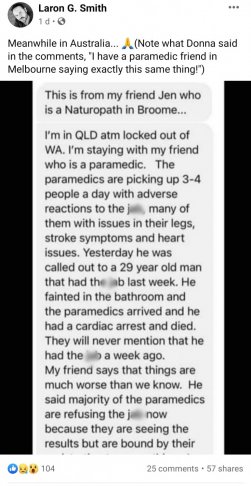 A few posts I've come across this evening in relation to my article above. I've also posted these on their respective threads on RT so they are not lost.

White House Admits To Flagging Posts To Be Censored By Facebook
"We have previously discussed the extensive censorship programs maintained by Big Tech, including companies like Twitter and Facebook taking sides in major controversies from gender identification to election fraud to Covid-19. The rise of corporate censors has combined with a heavily pro-Biden media to create the fear of a de facto state media that controls information due to a shared ideology rather than state coercion. That concern has been magnified by demands from Democratic leaders for increased censorship, including censoring political speech, and now word that the Biden Administration has routinely been flagging material to be censored by Facebook. "
https://www.zerohedge.com/political/white-house-admits-flagging-posts-be-censored-facebook