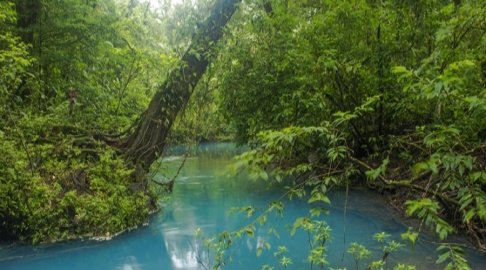 ​
Possibly one of the issues that are giving more talk at this time around the world is the "climate change" and the impact that the lifestyle that humanity has developed and generated in all the ecosystems of the planet. Not only are we burning and destroying forests, contaminating the waters around the globe and filling them with plastic or causing huge concentrations of pollutants in the atmosphere, but we are also getting sick ourselves and all life forms that live on Earth.

Although all the current movement we see with the protests about climate change has a part of manipulation of its "leaders" and instigators (beyond the public faces used for it) using the feeling of people not wanting to see as this planet becomes a poorly habitable place in a few years, and although I know that I will contradict public opinion, the planet is not going towards a long-term warming, but towards a new ice age seen a few thousands of years ago. You already know that you can check it by asking your Higher Self directly or requesting the signals and synchronicities in your reality to get confirmation. Let's see what is happening.

Temperature rise due to self-healing and contamination

The reason why the temperature is rising in many areas and the poles are melting and we are seeing heat waves and a total “disorder” in the climate is, on the one hand, the enormous pollution we produce and the deforestation of forests and jungles, something that we cannot take our responsibility off, but, on the other hand, the enormous amount of energy that the planet itself is “releasing” and liberating to “self-heal,” which produces a lot of heat, which accumulates in the planet itself, and, consequently, at points where there are more negative or dense “energy bags” that have to be “emptied” (also created mostly by human beings themselves). The changes produced by this “cleaning” are shown to us as variations and climatic changes that also cause problems in the lives of many people who see their reality altered for environmental reasons. Within a couple of decades, once our planetary logos has balanced and cleaned up any negative energy remnants present in itself, and no more heat is produced by the release of these energies, the planet's temperature will tend to stabilize and, throughout over the next few centuries, it will go down, because, as we said, “it is time" to enter a natural cycle that, within a few millennia, will lead to another mini ice age.

But since that is still far away in time, and we continue to dirty, pollute and alter the Earth's ecosystem, it is possible that, no matter how much the planet itself cleanses and stops the climatic alterations, we do not arrive in time to recover from so that it is sustainable for human life in the short term, since the biosphere will always recover and recover on its own, no matter what happens to humanity, because there are thousands of groups and hierarchies and beings whose only mission is to ensure that the Earth's natural ecosystem survives at the expense of anything and any situation.

To prevent that this situation really becomes a problem for the next generations, at the level of our Higher Selves and of those who assist us, the possibility has been raised of doing something similar to the request we made to accelerate the reforestation of the areas razed by the fire this past August, and that is paying off at the energy level, and soon it will be at the physical level, because a large part of the flora of the planet is already connected to the energy source that represents the etheric core of the Earth, so that, as we had explained, once the etheric and energetic structures of plants and trees are connected to the planetary nucleus, their growth at a physical level will be fast, powerful and spectacular in a few years.

Therefore, we are offered the possibility of requesting something similar for the other elements of the ecosystem that are semi-active and semi-functional on the planet, starting by increasing the groundwater that flows through it, since the water is a natural product that logos itself and its hierarchies can create and increase at will, as well as put in place mechanisms of atmospheric cleaning that the Earth has, something like those of the human body to filter and discard toxins, getting the Earth systems to work and exponentially multiply their means of self-recovery. On the other hand, we will launch processes in the petition so that companies and companies that take advantage of these natural resources against the greater good of the population, who need them freely and for free, see their “energetic” capabilities restricted to act, then, remember, that if at the mental and etheric level something "does not flow," neither does it at the physical level and stops working. The identification of them will be carried out by the elementals and forces of nature "reading" the energy structure of everything that is connected to the planet's ecosystem and using its resources inappropriately. In this way, a large part of the companies that nowadays do business with basic and necessary goods for the survival of humanity will tend to be dismantled at the mental and etheric level, leading them in the medium term so that they cannot continue to exist at the physical level either.

The request that our higher Selves give us for it, for those who want to execute it, is the following, only once:

It is something very long term, but it is worth starting it now so that those who come in the future can enjoy it.
Click to expand...

Somebody wise once said that the best time to plant a tree is about one generation ago.
Reactions: Hailstones Melt and Pucksterguy

We are lucky that the natural system in all the levels of bodies that end up making things function at this lower, physical level has the intelligence and wisdom to create elementals, natural forces and processes of creation of reality that can perform their work and their miracles in spite of the learning and conscious awareness level of the beings (surface or otherwise) that inhabit the planet as part of their evolution and growth.

Well done. It's like an analogy of a tick just going about its business on its support network, but the bacteria it harbours can create Lyme disease in the larger entity's body. But the conscious awareness and intelligence of the larger entity can produce change and bring back a healthy gestalt through its development of knowledge through interconnectivity.

If anyone is new to David Topi's threads, the request to Higher Selves is best read out loud. The intention is strengthened when voiced out loud.
Vibrate in accord with the universal notes​
​
Question: How do you choose the higher vibrational energies in any given situation? "You choose by taking the high road, instead of engaging in the same argument that you’ve had several times with the same person. You choose by spending more time in nature and putting away your electronic devices. You choose by being true to yourself and the impulse that you have coming to you from within, rather than just doing what everyone expects you to do, or what your parents did." Quote from the Arcturian Council, posted December 5, 2019​
Reactions: Lila

and come from the heart Hailstones Melt
Reactions: Lila

and out comes a world without processed foods that harm our body
Reactions: Hailstones Melt and Lila

I was in the woods nearby today enjoying some outdoor time when I looked and saw that 'layered' look of a reality superimposing itself on our present reality. What I saw there was this same spot a number of years down the road very lush and incredibly healthy looking, feeling and smelling.
I realized it felt like a piece of the Earth David Topi describes above:

so that, as we had explained, once the etheric and energetic structures of plants and trees are connected to the planetary nucleus, their growth at a physical level will be fast, powerful and spectacular in a few years.
Click to expand...

Lila said:
I was in the woods nearby today enjoying some outdoor time when I looked and saw that 'layered' look of a reality superimposing itself on our present reality. What I saw there was this same spot a number of years down the road very lush and incredibly healthy looking, feeling and smelling.
Click to expand...

I have this in a lot of places where at this point nature is not that powerful but you feel the potential lurking beneath the surface.
in these places I give this "potential" vision energy and encourage nature to come back in all it glory to show people how magical and strong she is.
my prayers are different than the above but the core though feels the same.

I hope these blessing work by attracting the right circumstances for the transformation.
“Don’t judge each day by the harvest you reap but by the seeds that you plant.” - Robert Louis Stevenson
Reactions: Hailstones Melt, Lila, Alain and 1 other person
You must log in or register to reply here.
Share:
Facebook Reddit Pinterest Tumblr WhatsApp Email Link