On Sunday I conducted a QHHT past life regression with a client who wanted answers and healing around a number of different issues, including,
…and a few other things. Thanks to the session, he found the answers and healing he was looking for. I sharing some of the experiences that came up, especially one that specifically connected into the consciousness shift going on with humanity (the space battle at the end). 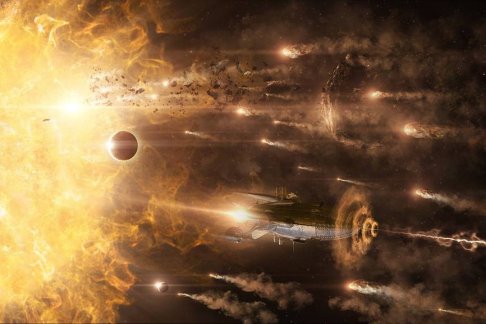 ​
He first found himself standing on a moon orbiting another planet. The 160yo male (he had tech to live longer) was the commander of a space force of over 300 soldiers. This was a simultaneous life to the one he is living now. The avatar he had connected into knew we were establishing the regression connection and had gone away from camp for that purpose.

We found out who the group belonged to, who funded them and why they were out there in space. Some things were kept secret when I asked certain questions. The moon was a seed moon, where many races of ETs visited to gather seeds (think botany). While there, he connected with an old friend, a female arcturian, who had come down in an aquatic looking ship that first had to shift from a non-physical energetic form, into physical, when I asked him to describe it. The purpose of the visit was to share knowledge around the use of the seeds.

Next up, he found himself as pure consciousness observing a meeting taking place in a futuristic looking city on another planet. They did not know he was present. At the head of the table was a draconian male. Two reptilian beings were beside him among others. They were discussing the fact that they no longer had access to this seed planet and were working out how to move forward. Surprisingly to the client, the draconian had a manner that was not aggressive, but intelligent and calm mannered as they came up with 3 different plans.

Moving on, he was observing a very large and important battle taking place in space near the centre of the galaxy. At first he didn’t know what was going on, so I moved him back and forth through time to see what started the star ship based fight. He said it was like “Star Wars on steroids”. We gathered a lot of information there. The reptilians were splitting. A small group had decided to no longer follow the old ways and wanted to change and live differently. They had basically become positive/good.

There was a gold looking ship nearby, as these two other ships/sides met. It was the Pleiadians who were acting as a mediator/intermediary. They could not come to an agreement and the fight started. The reptilians that did not want to change their ways had a very large number of ships. As the battle continued, many ETs started joining in on both sides, those that were in support of the reptilians splitting off and those that weren’t. There were groups among the same races of ETs, mixed on both sides.

In Earth time this was taking place over thousands of years because of how time is separate here. The end of the battle will be in about two years from now, Earth time. The good side won, but just barely, by 2% it was said. The ramifications of this battle permeated out into the universe energetically, as it was more than just the ownership of planetary systems and space.