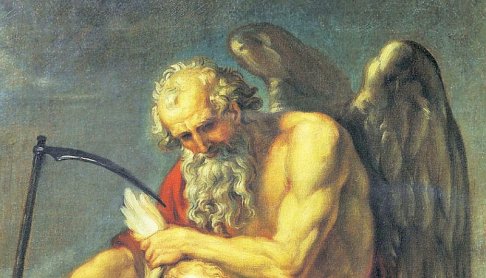 It's time to talk about Saturn that more than any other planet dictates the tone of our life on Earth in areas of the hard stuff in a global sense as well as personal, as his relationship with the luminaries (Sun and Moon) in our birth charts dictates much about our health and happiness in this life, relationships and how we handle hard times.

He is about karma, cause and effect and shows the areas of our lives where we will need to work the hardest to overcome fear, negativity or any sort of pain, but also where we will find the most structure and satisfaction.

In transits his lessons are the hard ones but also those that bring us most stability.

In his own sign of Capricorn for the last three years he prepared us for what has now come this year in a global sense as he was toughening us up, forcing us to work on our weaknesses and make the most of our strengths.
Things were going fairly well in both areas until he moved signs to Aquarius for a few months and then back into his own for the rest of the year to make sure we all get the message that a new way of life is needed with new rules(Aquarius) and we better believe it “or else”.

He also showed us he cant do the job alone as people do not want to change apparently and prefer to stick to the old rules and ways, yes I say it all the time – the “blame punish and control” ways of our past which goes back to times of biblical laws and the ten commandments, and even further back to the time when there were dire consequences for committing sin, some punishable with death or being cast into a hellish pit where evil lurks.

So not having backup from helpful planets such as Jupiter in the new sign, Saturn brought in martial law and gave us examples of how communist countries handle things when the going gets tough.
And now he is giving us a crash course in how to get to where we need and want to go, which has pretty much caused a regression into the dark ages of racial tensions and total inequality, in our heads at least.

Apparently the world needs reminding that we are not as equal as we thought we were which is in fact true by race, gender and belief systems…

The place I am going with this is that Saturn is about to change direction in 2 days time which at this time in our history is huge.
It marks a turning point when order begins to return from chaos and the dark forces that have been in play, and it is true that Pluto has contributed to this with his conjunction to Saturn and also Jupiter this year as this has brought focus to a rich elite that pretty much controls this planet and it isn’t a President or PM or King or Queen, the former are chosen by people so cannot be blamed, and the latter are born to the job, so in a sense they cannot be blamed either unless they promote themselves to the position.

The combination of Jupiter, Saturn and Pluto in Capricorn has brought to the surface the great power money has over our planet and those that rule it, which is all about to change.
And the change begins in earnest now in 2 days.

I wont make this post too long but aspects that happened between Saturn and Pluto earlier in the year and Jupiter's input involved the world economy(Jupiter) and Pluto has been about the dark forces that have been in play and the secrets we know little about.

Explosions come in many forms when Pluto is involved and there have been a few this year as has the blame and punishment, cruelty too, plus severe policing being implemented by Govs that one would never have expected the same from. And most alarming has been the every day person who has backed it up, lost compassion and joined forces with the dark side.

Secrets are also being revealed that come from the deepest and darkest of places including secret services.

As we choose our lives before we are born, who would have wanted or chosen to be a world leader in such a time! Would you? It’s a question we could all ask ourselves as blame and hate towards leaders anywhere has never been so dramatically black or white. That’s Plutos input backing up Saturn.

And the powers that be become parent archetypes so the more issues we have not dealt with in that direction, the more we will blame those who rule over our countries. This also is a Saturn in Capricorn factor and the eclipses that just ended brought all that to a head in July.

Jupiter is more about the return of the world economy as he also is direct now in motion and will join Saturn both in Capricorn and then Aquarius at the end of the year as they join hands and walk together to the new sign from the time of the Total Solar Perigee eclipse in Sagittarius, 15th Dec. They will reach Aquarius on the 21st Dec, just in time for Christmas.

I have said it before and will say it again," Nostradamus will be turning over in his grave" as he must have foreseen this centuries ago.
I do believe the author of Revelations saw it too as it's that big, this whole year is.

The power of good will return with Jupiter's backup and the extreme power of the eclipse that will be the strongest we have seen for some time.

This approaching turning point of Saturn in 2 days, for the individual will be a time of changing directions for many of us as any transits in force will be triggered whether positive or negative and for both any restrictions will begin to lift as Saturn is on a mission to reach his goal. If the restriction is about fear, authorities (including our own inner authority), money, law , bossy people, ill health, etc , then this is the turning point but it will still take time. Saturn rules time.

Capricorn type people will feel this turning point a lot in the coming week as will Gov bodies and world rulers.
But we all will one way or another.

Today Mercury enters Scorpio which will give us all much to ponder on in the 2 months or so ahead as s/he will retrograde in this sign and move back to Libra in that time.

In the meantime Scorpios will enjoy the extra brain activity and notice an increase in communication and be more willing to share their own ideas than usual.

Virgos and Geminis and the rest of us will enjoy getting deep and doing more than the usual research and in fact hopefully Geminis will find time to do some research instead of taking too much notice of popular media and what is just in front of their eyes.

Geminis thrive under Scorpio energies if they have not have had time plumb their depths which hold so much information if only they realised it more often.

For all of us we can be ready for many secrets to come to light in the two months ahead as a lot of this is political with Libra still going to be involved.

Mercury will trine Rx Ceres today as she is on her way back to Aquarius to help with this changeover, so she can do her bit for the future of mankind in caring and compassionate ways.

This trine could make for some very harmonious exchanges between loved ones which could be a real comfort as we move through this last "dark before the dawn" phase.
"We are endless galaxies but we have seen just one star."
My Astrology focused Facebook Page: Neptune's Magic
Reactions: Alain, Carl, Lila and 3 others

Thank you, Janne, for the deep clarity you always bring to our own perceptual astrological views.
Vibrate in accord with the universal notes​
​
I see it's time to change my signature message. Out with the old and in with the new! ​
Reactions: Alain, Lila and Janne

Janne said:
I have said it before and will say it again," Nostradamus will be turning over in his grave" as he must have foreseen this centuries ago.
I do believe the author of Revelations saw it too as it's that big, this whole year is.
Click to expand...

Yes
Everybody all around the world - Gotta tell you what I just heard
There's gonna be a party all over the world
I got a message on the radio - But where it came from, I don't really know
And I heard these voices calling all over the world
Electric Light Orchestra
Reactions: Janne

Oh bless you and your wisdom Janne and many thanks. Yes it all makes sense really doesn't it.

As a Capricorn I don't think I can take much more so I do hope Saturn going direct will be easier on me than the last week or two !
Laughter is the sound of my soul.
Reactions: Lila and Janne
OP

Pod said:
Oh bless you and your wisdom Janne and many thanks. Yes it all makes sense really doesn't it.

As a Capricorn I don't think I can take much more so I do hope Saturn going direct will be easier on me than the last week or two !
Click to expand...

You can take much more than you think but your courage and belief in something higher and better will pay off in the times to come Pod. From tomorrow the tides turn but it will be December which will see your real breakthroughs...

I have both Saturn and Jupiter in Capricorn in my natal chart, so I am also experiencing personal interesting times!
Reactions: Lila and Janne
OP

Hailstones Melt said:
I have both Saturn and Jupiter in Capricorn in my natal chart, so I am also experiencing personal interesting times!
Click to expand...

You will be! My Saturns in Cancer and so is my Mars op my ascendant, so me too, re interesting times + Jupiter and Neptune in Libra which is part of the cardinal cross...

You will be luckier than me though with your Jupiter return happening.

It sounds like we may have some auroras in many more areas than usual right around this time.
This feels like a suitable way to mark such an event.
Reactions: Janne and Linda

Summary: Saturn going open a can of whoop ass with change... more change, lots of change, and a whole darn bucket of change! And... did I mention change?

NOW that explains why I've had so many new amazing things happen in the past 2 years. At least, this is the article that really got through my brain and really clicked with me.

It's possible there will be economic slowdown in some countries, or maybe just in some US cities. You know, the ones that plant and encourage negativity.

Little things can bother me, but when it comes to big changes, I'm so calm maybe because I've done similar things before. I'm grateful for all my training, even though it was hard, and 30+ years ago. I must be here to help people get through this I guess.
"When you censor a person you do not prove him a liar, you prove you fear what he has to say."
Reactions: Alain, Janne, Pod and 1 other person
You must log in or register to reply here.
Share:
Facebook Reddit Pinterest Tumblr WhatsApp Email Link