This article says that ancient inhabitants of many Salish Sea island sites lived a trading lifestyle similar to those who once lived on the coastal Mediterranean, or Vikings further north who used river systems for trade and travel.

What would it take to imagine a very crafted and workable interactive mode of living, given the resources of ocean, inlet, rivers and river mouths, swamp and beaches?

Study looked at more than 2,000 sites on Salish Sea islands that showed signs of ancient inhabitation

theprovince.com
Vibrate in accord with the universal notes​
​
Question: How do you choose the higher vibrational energies in any given situation? "You choose by taking the high road, instead of engaging in the same argument that you’ve had several times with the same person. You choose by spending more time in nature and putting away your electronic devices. You choose by being true to yourself and the impulse that you have coming to you from within, rather than just doing what everyone expects you to do, or what your parents did." Quote from the Arcturian Council, posted December 5, 2019​
Reactions: Pucksterguy

That's very interesting. Apparently they discovered that the very same area had not frozen during the last ice age. They found that a lot of the DNA from the indigenous population all lead back to that area.
Reactions: Pucksterguy
OP 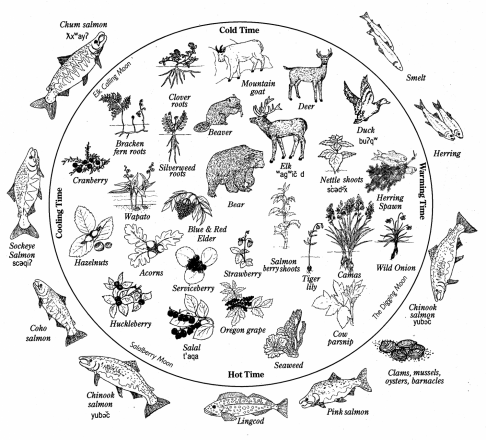 Coast Salish peoples include a variety of First Nations living along the Northwest Pacific Coast in British Columbia, from the Lower Mainland and Vancouver Island south to western Washington and north-western Oregon in the United States.

Daughters of the Earth – The Lives and Legends of American Indian Women, by Carolyn Niethammer

The Foreword to the book says:


To My Sisters,​
Who, in seeking answers for today and tomorrow​
Might pause, and look at yesterday.​

I picked up this book in 1982, and unfortunately, the copy I have of the book is a little the worse for wear, but is beloved, nonetheless. It describes, in fascinating detail, the lives of First Nations women, the culture, mythology and anecdotes which paint a picture of how many people lived. The book is illustrated with black and white photographs taken from the archives in the decades shortly after the invention of the camera. (Note: the term First Nations was not in use at the time this book was written, and the term Native American is used instead).

“On the coast of British Columbia, any Salish woman who wanted a few years’ rest from childbearing directed that the placenta be buried with a scallop shell.” P.18

“On the Washington coast Lower Chinook women spent the time of their confinement rubbing their breasts with bear grease and heating them with hot rocks or steam, while in northeastern Washington, Salish mothers heaped their sore breasts with heated pine needles.” P13

“When a Salish woman, in what is now eastern Washington and northern Idaho, did not become pregnant in a reasonable time after she was married, she would go to one of the old women of the tribe who were wise in such lore and would eat the herbs the medicine woman prescribed. If she remained barren, her husband wouldn’t divorce her, but he would probably take another wife if he could afford it.” P16

Although the vast majority of North American tribes incorporated the virtues of hard work into the girls’ puberty rites, quite a different ethic pertained among the upper class of the slave-owning tribes along the north-western coast of the continent. Here, girls were not allowed to do any work during their isolation; instead they were cared for by servants, who were sometimes freed at the end of the ritual as a gesture of largesse on the part of the girl’s father. Well-bred maidens of the Coast Salish tribes were taught to look on marriage with a rich gentleman as their ultimate goal, and the restrictions they faced during puberty were aids in accomplishing it. In some villages when a girl reached a certain age, whether she had actually experienced her first menses or not, she was secluded in a small compartment in the wooden longhouse in which her family lived. For several years she was kept incommunicado and allowed to go outside only at night, and then in secrecy, accompanied by her mother. She did nothing at all during the day; her continued inactivity and seclusion made her weak and pale and eventually unable to perform any physical task. These years of cramped-up sitting sometimes resulted in a partial crippling of the girl’s legs, and upper-class women often had difficulty walking as adults. Yet these very defects were valued as marks of the ultimate aristocrat, and this was just the kind of girl noble families sought for their sons. These girls were so hidden away that an aura of mystery surrounded them, an additional attraction to an eligible suitor. But, as mentioned above, such treatment of young girls required the luxury of slaves and was not widely found among the native North Americans, most of whom viewed industry and competence as the highest virtues.” P43

“Among the Coast Salish tribes in Washington a young woman’s preference was not considered when her parents selected a mate for her. She was told what was best for her, and convinced either of the wisdom of her parents’ judgement or the futility of resisting, she yielded and was duly lauded for her obedient and respectful behaviour. It was maintained that girls were not forced into distasteful alliances; however when young women married into tribes other than their own, their heads were covered on the journey to the new village so they would not know the way home.” P72

“Elopement was another way young women contrived to escape an arranged match. Some southeastern Salish families of extremely high prestige might agree that their very young children should marry. The father who suggested the union took a present of horses or hides to the other father and immediately received a gift of equal value. From then on it was accepted that the youngsters were married, although they did not live together until after the girl’s first menstruation. The only way out of the situation was for one of the pair to elope. Usually the young person who had run away was welcomed back after a short time, for it was said: “What could the parents do?” P73

Education and training of girls

“Even farther north, the Tlingit and Salish groups insisted that the children arise at dawn and bathe in cold water, summer and winter.”P24

“Because the roles of Native American men and women differed so greatly from each other, it wasn’t long before children had divided themselves according to sex. The age at which this separation was enforced varied; among the Salish of the northwestern United States and the Chickasaw of the South-east it was as young as four or five years old.” P25

“Among the various southeastern Salish groups little girls had a few chores they were expected to perform for their mothers but most of their time was their own to build little salmon traps and playhouses. The girls did not begin practical training until they were about nine. The Sinkaietk, a Salishan group, set up a girls’ house in the permanent settlements, which served a twofold purpose: it kept the young girls away from the boys and provided a place where they could learn the skills useful for running a household. Girls went there during the day, and the old women taught them how to make bags, baskets, mats and twine, and to do bead and embroidery work. In some villages the completed articles were hung on bushes along the popular trails so they could be admired. Attendance at the classes was probably irregular, depending on what work the girls were expected to do at home, but each maiden kept going to the lessons until she had learned at least some basic skills. Salish families also held a small family ceremony to celebrate the the first roots and fruits gathered by their daughters. The women of the household were in charge of the feast, which included the foods the little girl had obtained. The little girl served the guests, primarily relatives, but she was not permitted to eat any of the food herself. Some of the older, honoured guests spoke to the child, emphasizing the virtues of hard work which would lead to great success as an adult.” P28

In southeast Salish communities, in Washington and northern Idaho, there were certain women – including some married women and others who were not able to obtain a husband – who could be had by anyone at any time. As discussed in the chapter on marriage, the southeast Salish were a polygamous society, and a woman did not always live with her husband nor was she necessarily supported by him.” P227

“In some of the tribes on the western side of the continent we also find women in leadership roles. Among the Sinkaietk, a Salish tribe that lived along the lower Columbia River in southeast Washington, as well as in some of the neighbouring groups, there were women who served as chieftess of their bands. Although it was required that the woman who held this office be related to the chief, the holder of the position was officially elected and formally installed by the council. The extent of the power she exercised varied from group to group. In one band from which we have a report, the chief was the group manager and the chieftess was a consulting adviser only in cases of murder, revenge or emergencies. If her decision differed from that of the chief, the people were free to follow either.

This recognition by the Sinkaietk of the equality of sexes is not unexpected. An early traveller to the area observed that along the lower Columbia, where the women’s root digging contributed substantially to the support of the tribe, they seemed to assume an air of liberty and independence unknown among the neighbouring tribes. Older women were particularly respected and were consulted in all matters of importance.” P144

“Among the southeast Salish, maidens were sent out to find a guardian [spirit guide – my edit] if their parents thought it a good idea for a girl to have such aid. Although ninety percent of the boys sought guardians and were rewarded with visions, only twenty to thirty percent of the young women received spirit power. The average woman, who never obtained a helper, led a satisfactory life, but those women who were fortunate enough to have visions were regarded as the equals of men.” P237

Southeast Salish women, who lived in the area of the Washington-Idaho border, also were able to claim considerable power and privilege by becoming shamans. Among the services performed by shamans for the public good was control of the weather. Part of the technique of weather control was for a shaman to let blood from a cut on her head fall in the snow. One winter the weather was so severe that all the livestock were dying of the cold. The snow was so deep that they could not find any grass to eat. So the people sought the aid of an old woman who had power over the weather. She sang her power song and then asked her petitioners to cut a gash in her head. As soon as her blood had fallen on the snow, a south wind began to gather force and soon blew in rain clouds. Rain soon fell and washed away the snow. All the people who owned livestock were grateful to the shaman for saving their stock, and they all contributed to pay her fee.
Last edited: May 9, 2020
Reactions: One65 and Pucksterguy
You must log in or register to reply here.
Share:
Facebook Reddit Pinterest Tumblr WhatsApp Email Link