More and more people are becoming aware of tiny houses—houses that have everything you need which take up a much smaller amount of space. I came across a rent–to–buy option yesterday, where you pay a weekly amount of rent, but at the same time you are paying off your mortgage for the tiny house. For example, you start renting at NZ $350 a week, and in 12 years you have paid off your tiny house that could be worth about $110,000, and that rent/payment includes insurance. Something to think about.

I’ve included some photos of one tiny home that this NZ based company offers, http://www.diyhousebuilding.com/rent-to-buy-tiny-houses.html. (They also offer the rent–to–buy option.) 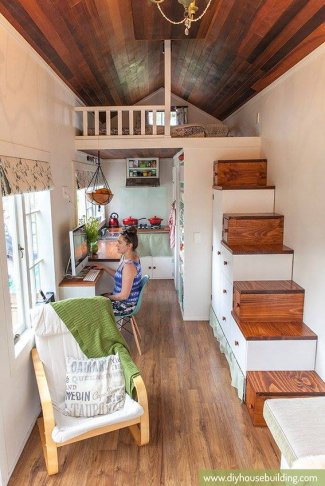 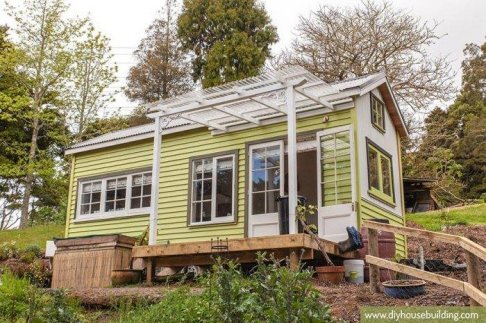 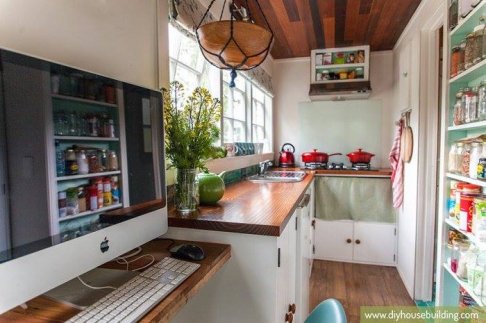 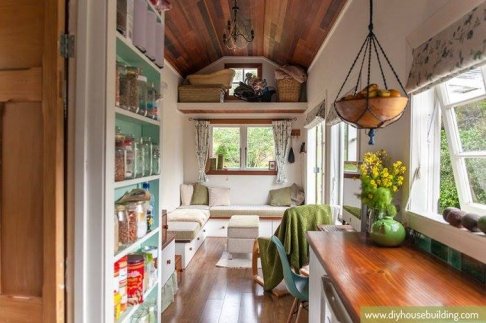 I'd love to live in one of these on the countryside. Impossible in my country. Like how they made the wardrobe and drawers the stairs to the sleeping room at the same time.
Let your Truth be Authority rather than Authority be your Truth. - Sinera Arenis
Do or Do Not. There is no Try . - Master Yoda
Reactions: Lila and Anaeika

The houses are beautiful and seem to be well designed. I've watched the growth of the tiny house movement and see that it is filling a need for reasonably priced housing for many. It makes a lot of sense to me.

However, any rent to own scenario has to be carefully considered. In my work, I've come across the bad ones. They can be a great way to buy, but you need your own real estate attorney to review the contract. It will be well worth the cost.

The things that work for the renter / buyer are in the linked article, and they are a powerful incentive.

The things that can go wrong include the owner/ developer not paying taxes, which may result in a lien on the property and / or tax sale, which can happen without the renter's knowledge. Insurance might not be paid, and in the event of damage to the property, the renter has no recourse. The owner might have taken out a loan to buy the land and build the property but default, and the lender assumes ownership through foreclosure. Also, if the properties are in a group setting, like a condominium development where the grounds are under common ownership, the potential problems can increase. These are just a few.

Be aware as well that as we get older we tend to bump more into things, in other words, we loose coordination and need more room to maneuver so tiny houses aren't for everybody. When we lived in Washington state the lot next to ours was bought by a couple and the wife was a former nurse for elderly people and was approaching her golden years, so based in her professional observations designed and built their house with very interesting features like wider corridors, wider door openings, pass through openings to minimize unnecessary movement, lower cabinets, etc. A wise couple.
Reactions: Lila, Anaeika and Linda

Be careful with rent-to-buy homes. Sometimes the owner applies only a portion of your payment to the house principal. Read the paperwork carefully.

My house is small but the mortgage payment is cheaper than most rent where I live, and that includes the mortgage, property tax, and house insurance!
Reactions: Lila, Anaeika and Laron

can be a really nice solution for those who little room is enough, if that arrives at my country they surely find a way to abuse it as they abuse already now enormously in the rent
Reactions: Lila, Anaeika and Laron
OP

It sure is interesting seeing the theme around the comments here compared to when I posted about this on Facebook—seems like a very negative attitude here towards them, where the opposite applied on FB.
Reactions: Lotos, Lila and Anaeika

Laron said:
It sure is interesting seeing the theme around the comments here compared to when I posted about this on Facebook—seems like a very negative attitude here towards them, where the opposite applied on FB.
Click to expand...

Actually, I don't think the posts are negative. There may be more business and finance people here. In mine, for example, I pointed out positive aspects of this movement. However, with my experience in real estate and finance, I know rent to own scenarios are fraught with problems. The last thing I would want is for anyone to do is jump into this type of financing without a good understanding of what it really means.

In a nutshell -
tiny homes are great
rent-to-own can have its difficulties.
Reactions: Carl, Lila and Anaeika
OP

Linda said:
Actually, I don't think the posts are negative.
Click to expand...

I should have clarified — I felt the energy of the space of the thread, hence the mention of negativity.

While not for everyone, I think tiny homes are very important for a many a reason.

Just like with anything in life, we have to be careful with what we do, and use common sense. Read the fine print, do research, etc.

I just don't see why we would want to focus so heavily on the negatives, and put people off tiny homes.

It's always a great idea to point out positives and negatives, just like Linda did, and remember, words can make a big difference: A Group of Frogs and the Power of Words
Reactions: Lotos, Lila and Anaeika

Only too true laron if i remember right a familly house is far over a million euro and the size is not in all the countrys the same what is understood as familly house.

I think all places and attitudes combined it can well serve a large portion of world population
Reactions: Lila, Anaeika and Laron

Laron said:
where the opposite applied on FB.
Click to expand...

Tiny houses are more of a trend for the younger generation, and people who have tiny houses are getting out of them. They are just tired of the tiny concept and lack of space. But for some people, a tiny house is their only option. Which is odd since a regular (used) house is about $10k more than a tiny house and much bigger. But the trends are people want brand new houses, and a tiny house fits that want.

A tiny house is essentially a trailer, so the value will only go down with time, like a mobile home. Plus if they have to pay lot rent that only goes up, up, up, it is an uncontrolled expense, which is why I got out of an apartment as soon as I had the money to get a house.
Reactions: Hailstones Melt, Lila and Anaeika
OP

therium said:
Tiny houses are more of a trend for the younger generation,
Click to expand...

I disagree. From what I have picked up since first learning about them, this is not based on age, but based on a better and smarter way of living. This is a new trend, not an old one.

I know a lot of people my age (I'm reaching 40 soon) and older who are very keen on them. I don't look at them because they are cheaper, I have no interest in the cost aspect—I think the older generation are living with outdated thinking in terms of a belief that a larger place is more appropriate.

I've moved around a lot, lived in many different sized homes, including large ones (and "trailers"), and can understand the need for space, yet I find it makes much more sense to have less. Many benefits come with this, such as connecting more with nature, not having excess items laying around (i.e. hoarders), taking up less of an impact on the environment, having easier maintenance, etc.

It all depends in your situation and where you are heading in the future. You may need a larger place if you work from home, have children, etc.
Last edited: Nov 8, 2018
Reactions: Lotos, Lila and Anaeika
OP

I will also add that I see many people locking themselves away their big houses and as a result becoming less social—if places were smaller and more open, it would encourage interaction and a closer knit community. You don't always want to get close to everyone as it depends where you are situated, but if you had a similar theme in the community, this would work better, such as Earthship homes.
Reactions: Alain and Anaeika

Lol, Laron you took the words out of my mouth. Or, rather, out of the mouth of a small, frequent visitor to the house where my children grew up. It was very small by most standards, though somewhat bigger than the one shown above. Since we also had an entire family in it, I'd say our house had proportionatly about the same amount of space (perhaps a bit more). Our little visitor mused that our house was little, some friends near him had what he considered medium sized houses and his house was biggest. His concluded, from observing the way folks interacted, that 'the smaller the house, the more people played together'.

I did find that living in such a small space encouraged going outdoors a lot, interacting with our neighbours frequently and both considering very carefully what we bought because it just wouldn't fit and also encouraged giving away stuff that did accumulate because, again, it just didn't fit.

It didn't seem to work that way for everyone, as some neighbours in the same size places really had trouble with this. However, we did all tend to ask each other about how to manage our small spaces, where we could take out what we were tossing, how to manage our children on rainy days when they needed to get their jiggles out, etc. Overall, I would say that living in the small space tended to make us all aware of how little we need much more than living in bigger spaces and I am really grateful my children got the chance to experience this. It seems to me a big blessing. I would also say that there was a natural tendency to learn how to manage space when living in these small houses and that the trend was that even those who had the most trouble with it initially got increasingly comfortable with it as solutions appeared. And they did appear because we discussed things so naturally.

The 'bigger is better' trend of thinking in so many places I've lived really gives me reason to appreciate the value of a tiny house option. I see it as a great option for many situations.

Rent to buy is another issue entirely. I haven't any experience with it.
Reactions: Alain

To be truthful, I would rather sleep in a black, London, Taxi cab than one of those small homes. But to explain, as I once introduced myself to someone years ago: "I don't do dainty".
Last edited: Nov 11, 2018
Vibrate in accord with the universal notes​
​
Question: How do you choose the higher vibrational energies in any given situation? "You choose by taking the high road, instead of engaging in the same argument that you’ve had several times with the same person. You choose by spending more time in nature and putting away your electronic devices. You choose by being true to yourself and the impulse that you have coming to you from within, rather than just doing what everyone expects you to do, or what your parents did." Quote from the Arcturian Council, posted December 5, 2019​
Reactions: Linda and Lila
You must log in or register to reply here.
Share:
Facebook Reddit Pinterest Tumblr WhatsApp Email Link