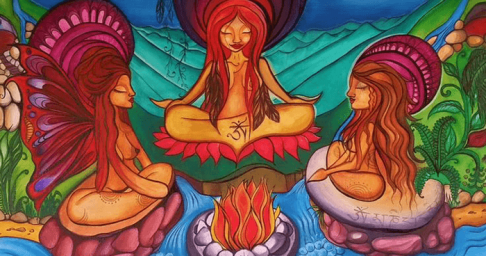 ​
Mercury in Aries has been making strong aspects with both Vesta and Makemake, the last being an opposition from Libra which is a reminder from the Polynesian Creator God energy to rise above the swamp of density that is generated on this planet by negativity and ignorance, and the grief it causes, to take a spiritual journey to get out of that swamp.

Use your own creative energy which inherent in all of us to think outside the box for a while and with Mercury in Aries, use that extra mental power to make things happen as you want to and overcome any adversity in your path, even if it based on very old customs or ideas that are hard to change but very outdated.

Changing existing stuck patterns isn’t easy but once done its liberating and healing to all concerned.

Arians and Libran type people, Virgos and Geminis would have got a bit of a shove in the right direction I am sure in the last few days and others with planets or points on the 8 or 9 degree Aries/Libra axis.

Mercury is quintile to Pluto bringing depth and a chance to do some soul searching for Aries, Scorpios and Capricorns and the
Mercury ruled signs, but its an energy we can all make use of as it empowers and enhances our mental abilities especially with Mercury in Aries.

Mercury is also quintile to Mars which emphasises all of the above so we all have an opportunity today to use our brains in ways that can really get things moving in the right direction and if we have to confront others then we can do so directly even forcefully but without malice.

But we should remember that Mars is still out of bounds and extra powerful, bringing the unexpected and a very powerful force for transition as he is currently acting a bit like Uranus with his powerful forces for radical change.

Mercury is conjunct Chiron in Aries which really says it all for self healing and being able to access that deeper wisdom we sometimes forget we have and pass on information that although it could cause some pain to others, will be so valuable for transition from one state to another whatever form this comes in, for all concerned.

This is happening at 9/10 degrees Aries so if you have planets around this degree or opposite in Libra then you are blessed. You can expect sudden breakthroughs for situations that may have been ongoing. Now is the crunch time for everything being revealed and brought to the light.

This has happened to me in the last few days in fact. I have Neptune in Libra around this degree.

And to top all that off, Mars in Gemini OOB is quintile Chiron, so there is a real push to use that positive and assertive wisdom in any way we can which is very timely as the New Moon in Aries coming up in 3 days is one of the most powerful of the year for strong decisions and bold moves not just for Aries but for all of us.

This is a real new beginning type energy for the year ahead, Aries being the sign that leads all the others.

Tomorrow Lilith again conjuncts Uranus at 9 degrees Taurus, which means for Taureans and especially anyone with planets there that a lot will be taken out of their hands as in many ways this is similar to todays aspects only with the element of surprise added.

Something that runs very deep will be brought to the surface to be dealt with, for Aquarians too.

Mars will be square to Neptune tomorrow so we get that influence of fire and water that can be so dynamic This is happening at 21 Gemini and Pisces so check if you have planets in these degrees of mutable signs as this could mean an event that sets emotional sparks flying in all directions. This is not necessarily a bad thing as

Venus will be quintile Saturn in Aquarius tomorrow which should be a soothing and stabilising force for the long term at least.
I am wondering if there will be more than the usual explosions around the world of one type or another with this aspect as it generally causes this sort of event whether accidental or deliberate.

Finding ways to ground ourselves is important in the coming days. Venus in Aries will also trine Juno in Sag at 23 degrees both signs, so this is an aspect of soothing the inner turmoil that could come from having any buttons pushed from our past around relationships or old family patterns.

Nevertheless the planetary energies in the coming 48 hours or so could be a little different to usual on a global and personal scale so look out for the unusual within self or with others you are interacting with and be prepared.

Some great opportunities for personal growth at the least is coming up for many of us.

For myself it’s been that way all week!
"We are endless galaxies but we have seen just one star."
My Astrology focused Facebook Page: Neptune's Magic
Reactions: Lila, Tania and Kiera