I came across this interesting section from the Orgone Australia website :-

Follow the index from the bottom of that page.

The Negative Green
If you remember, Negative Green is the energy quality which was responsible for the scientist Leon Chaumery's death. The French team felt that this was the most powerful wave vibration, with the shortest wavelength in the Universe. They believed it is related to cosmic rays.

The Negative Green (-G) band contains the Spiritual carrier wave. Its ability to penetrate all matter allows it to carry energy, information and consciousness from any spiritual or physical location to another.

Negative Green (-G) is created anywhere there is friction between two mediums, this is why you feel great at the seashore where land and sea meet.
On 2-D material it is generated when 2 media meet and is the secret behind emissions in drawings and spiritual art. It is the carrier wave responsible for the radionic devices operation. 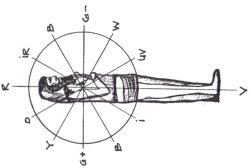 The emission of –G is so powerful that it can penetrate thickness of lead. It was used in Egypt to create mummification.
Mummies should never be dowsed, as they contain so much -G that it would unbalance your health.
Perhaps this is what was really the 'curse of the mummies'; radiations left over from the mummification process, perhaps 1000's of years ago.

As you can see -G is emitted right above the chest of the mummy.

Now for the interesting part:
The Horizontal wave is the beneficial vibration par excellence. This is the vibration of GOOD. It re-establishes health.

The Vertical wave is the most noxious vibration. This is the vibration of HARM. It destroys health by unbalancing the vibration of the cell. When they are in balance, the 2 waves are part of nature, but when only one of them is present, the resulting vibration has very distinct different effects, as seen below:

Lets explore the Horizontal Wave:
This is a Spiritual carrier wave creating an energy connecting the spiritual and physical worlds. It contains two other vital energetic components of spirituality: the Higher Harmonic of Ultraviolet (HHUV) and the Higher Harmonic of Gold (HHG). These energy qualities can easily be detected with the Virtual Cone Pendulum. They can be detected separately: Ultraviolet (HHUV) on the UV setting and Gold (HHG) on the Indigo settings (or Orange, if the colour violet is present). The Horizontal wave is beneficial to human and dogs, but detrimental to ants, termites and cats.

If your dog sleeps on your bed, you can assume that either he loves you very much, or there are radiations beneficial to humans in that location. In this case a cat would never sleep there, as they are more attracted to the vertical wave (see below) which is detrimental to humans.

s a strong mummifying energy, it dehydrates and preserve tissues. This is why people now carry bottles of water, your body gets dehydrated when exposed to V-G.

Twenty years ago the EMF radiation levels around us were much lower, and we did not feel the need for water. The Vertical wave is detrimental to humans and dogs, but beneficial to ants, termites and cats.

The Vertical Wave is the component of the Negative Green which killed Leon Chaumery. He became obsessed with it, not realising, like Marie Curry did, that he was playing with a dangerous unbalanced radiation.

Because so much of our modern technology emits only the Vertical wave of the -G (unbalanced energy quality) an environment is created which favours ants, termites etc, This is the reason why so many trees are being damaged by termites. We have created an environment which is beneficial to them, while being detrimental to us.

I have noticed that in the last 15 years, so many parks in Sydney have lost more the half their trees to the termites.

If your cat sleeps on your bed, you can assume that either he loves you very much, or there are radiations beneficial to it (and detrimental to you) in that location. These radiations may originate from EMF, earth energies, earth lines, like Hartman or Curry grid lines, (we will explore these later on) and these exposures to unbalanced energies could affect your health. You may want to move your bed as soon as you can.

The energies of Sacred Sites and Power Spots
A Russian healer called Enel, while living in Egypt in the 1950's, discovered that the tombs of the Coptic Saints, which dot the Egyptian landscape, all emit the Horizontal Wave of Negative Green energy quality.

Dr. Ibrahim Karim of Cairo Egypt, founder of the modern BioGeometry(R) system, later discovered that Horizontal Negative Green was just one component of the energy quality which balances and centers all living beings. This master balancing force, which is present in all natural Spiritual Power Spots on Earth, and in the Human Body, has three components. Following his discovery of all three components and their functions in nature, Dr. Karim named them collectively the "BG3" and identified the two new components of this energy as the "Higher Harmonic of Ultraviolet" and the "Higher Harmonic of Gold.

So the 3 components are:

You can read more about this on Dr Karim's website here: www.biogeometry.com

It appears that vertical polarization of EMF waves is the one that causes the most problems for health, and this is the one that is more likely to be in the EMF smog that surrounds us all today.

More information:
from the following book: The Nine Eyes of Light: Ascension Keys from Egypt
By Padma Aon Prakasha

"Negative green is a spiritually intelligent carrier wave that creates resonance with many other dimensions through the bodies of light. It is an integral and important part of spiritual energy fields and increases with the spiritual evolution of the person (It is the resonance with gray, between white and black). It is at the core of the energy centers in the body and power spots in nature, with structures such as pyramids and domes producing this vibration along their central axis.

It is connected to green tourmaline, which acts on the nervous system to solidly anchor high levels of consciousness into the mind, anchoring powerful healing abilities and self-awareness. it raises our ability to carry light and is a highway for light to conduct into the spine and nervous system. Along this journey, it can heal the energy bodies and open the heart to infuse peace and patience. one needs more negative green and green tourmaline if you find it hard to bring higher consciousness into thought or if you are emotionally closed and lack peace, compassion and patience.

Together, the harmonics of green and gold create not only sanctified inner space within you but also out space in the architectures and temples that the Egyptians lived and worked in. To have both integrated is to be living in harmony with all your bodies of light, which is how the Egyptians designed their civilization, their architecture and their spiritual work. The best technologies are already working within us. As we evolve so too our bodies reflect this change. Our cell geometries change, our spine changes, our brains change, even our sexual organs become different as that become clear, light and free. this was all known as mapped by the ancient Egyptians..." p. 120
Click to expand...

My brush with 5G

We've been unhappy with the price of our internet and basic cable provider (ATT). We still need basic cable for local stations because we are in the hill country, which makes reception iffy. Along comes Spectrum (bought out Time Warner) with a great deal and better internet speed. I read the...

Wireless Companies Are Fully Aware of the Harmful Effects

We are constantly been bombarded with harmful radiations which effects our well being. Big corporation are aware of these harmful effect & instead of doing something meaningful, they remain silent & suppress the study which raises serious health related questions...

I was listening to a guy talk about the math of the pyramids and the inner chambers. Clearly those builders knew way more than we have been led to believe. So, if the power of sound and energy waves is known by a few, then using disrupters like microwave ovens and 5G takes on a sinister role.

“Would You Sleep with a Poisonous Snake in Your Bed?”

Bees, wasps, ants and—you guessed it: snakes—thrive on geopathogenic zone energy. Bees will produce much more honey in geopathogenic zones (worth knowing for beekeepers). Ants will build their hills there. Some fish dislike geopathogenic zones, seen in a case where goldfish would only stay in the part of the aquarium where there was a neutral zone. Perhaps other fish have different likes.
Plants are also in the know. Among those that like geopathogenic zones are: oak, willow and fir trees. Those that have a difficult time of it include: apple, pear, and peach trees. Geopathogenic zones cause affected trees to bend in odd directions to avoid them, grow large tumors and produce little or no fruit, even attract lightning under the right circumstances.
Solid materials are also affected by geopathogenic zones. Walls produce cracks and humidity, roads have frequently repaired potholes that don’t seem to go away. Spontaneous combustion can occur in hay or other combustible materials if they are located in a geopathogenic zone.
There are statistics which show that accidents occur more frequently, especially head-on collisions, at certain places along highways where such geopathogenic zones cross the road, disrupting the driver’s concentration. In some countries traffic authorities have placed signs warning people to reduce their speed before the road crosses a geopathogenic zone.

Energy Health: Geopathogenic Zones, Dead Orgone, and Dissonant Electromagnetic Fields "Would You Sleep with a Poisonous Snake in Your Bed?" - Stillness in the Storm

Image Source. Shem from Discerning The Mystery shared this article in his analysis of a Wisdom Teaching episode with David Wilcock. It exposes a little known yet pervasive phenomenon of geopathogenic zones. Related David Wilcock’s: Wisdom Teachings – Russian Pyramid Research Part 3 These energy...