I was trying to fall back asleep this morning and was placed into a mental space / visualization with this Pleiadian or nordic extraterrestrial woman. At first I didn't realize it, and I just seemed to be observing this space that I was in and the being in front of me--- we were in this vague darkened atmosphere of a restaurant and I was sitting in a booth across from her. She was pretending to read this book with her elbows resting upon the table, and eventually the book was passed onto me and I pretended to read it as well. Then I seemed to realize what was happening and really took in everything. I felt that instead of having a distant connection to this being, that I was sitting right in front of them in real-time, like I was actually there. My immediate reaction was that this was an incredibly beautiful being in front of me and become somewhat embarrassed as I assumed we were connected telepathically, lol. My thoughts went to fearful catastrophizing eventually, and I noticed that there was a version of myself that I was expressing that I wasn't fully able to perceive continuously. For example, I would say things that seemed to be expressed on their truest level, and do things as well. At one instance my foot was rapidly tapping nervously and she promptly stepped on it, lol. Another instance was when I had lost the real-time connection and was trying to place my consciousness back into the visualization and I noticed I felt that I was 15 again, back in my psychosis, and was trembling in fear. I asked "what is this?" like I was afraid of the mental space I was in, or that it would shatter. I seemed to hear a female voice say, "She's scared." Sometimes she would be able to corner my catastrophizing thoughts and hold them in place as well with her mind.

I really began to try to get a hold on my thoughts that were downspiraling further, and I got pretty frustrated and tried to blow them all away. For some strange reason, an airhorn actually sounded from my effort and it was then that I noticed there were about 4 or 5 other booths in the vicinity of this darkened mental space. I didn't see them but felt them. They had other beings of her kind in them connecting with other humans like me as well. When the airhorn from my mind suddenly blew, all the beings looked up surprised and seemed just a bit frustrated at me for disrupting their connection with the humans they chose to work with. I thought to myself, "OH god, i'm THAT person." I apologized to them eventually when I had a feel for all of their minds and they were surprised again for a split second then immediately forgiving and slightly concerned in a compassionate way of course. That is what I could describe feeling at least.

Here's a drawing of her. She looks almost exactly like that insofar as a simple drawing can do justice, but her hair was a white/blonde rather than a yellowish. I noticed she had freckles as well: 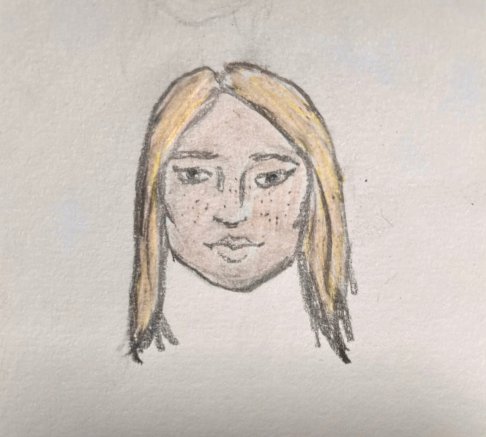 Hello Abby. Those destructive thoughts can be very difficult. One of the best pieces of advice I have received is to breath in/out very deeply (but slowly) when they are happening. For some reason it makes the mind pause. Focus on those deep breathes while you also focus on the positive thoughts you are trying to have. It helps a lot.
Reactions: Pucksterguy, Abby and Linda
You must log in or register to reply here.
Share:
Facebook Reddit Pinterest Tumblr WhatsApp Email Link