https://plandemicmovie.com/
COMING SUMMER 2020
Prior to the completion of the full-length documentary we'll be releasing a series of vignettes. The first installment features renowned scientist, Judy Mikovits PHD.

In an effort to bypass the gatekeepers of free speech, we invite you to download this interview by simply clicking the button below, then uploading directly to all of your favorite platforms.

DOWNLOAD pt.1 here
About The Film
Humanity is imprisoned by a killer pandemic. People are being arrested for surfing in the ocean and meditating in nature. Nations are collapsing. Hungry citizens are rioting for food.

The media has generated so much confusion and fear that people are begging for salvation in a syringe. Billionaire patent owners are pushing for globally mandated vaccines. Anyone who refuses to be injected with experimental poisons will be prohibited from travel, education and work. No, this is not a synopsis for a new horror movie. This is our current reality.

Let’s back up to address how we got here...

In the early 1900s, America’s first Billionaire, John D. Rockefeller bought a German pharmaceutical company that would later assist Hitler to implement his eugenics-based vision by manufacturing chemicals and poisons for war. Rockefeller wanted to eliminate the competitors of Western medicine, so he submitted a report to Congress declaring that there were too many doctors and medical schools in America, and that all natural healing modalities were unscientific quackery.

Rockefeller called for the standardization of medical education, whereby only his organization be allowed to grant medical school licenses in the US. And so began the practice of immune suppressive, synthetic and toxic drugs. Once people had become dependent on this new system and the addictive drugs it provided, the system switched to a paid program, creating lifelong customers for the Rockefellers.

Currently, medical error is the third leading cause of death in the US. Rockefeller’s secret weapon to success was the strategy known as, “problem-reaction-solution.” Create a problem, escalate fear, then offer a pre-planned solution. Sound familiar?

They named it COVID19. Our leaders of world health predicted millions would die. The National Guard was deployed. Makeshift hospitals were erected to care for a massive overflow of patients. Mass graves were dug. Terrifying news reports had people everywhere seeking shelter to avoid contact. The plan was unfolding with diabolical precision, but the masters of the Pandemic underestimated one thing... the people.

Medical professionals and every-day citizens are sharing critical information online. The overlords of big tech have ordered all dissenting voices to be silenced and banned, but they are too late. The slumbering masses are awake and aware that something is not right. Quarantine has provided the missing element: time. Suddenly, our overworked citizenry has ample time to research and investigate for themselves.

Once you see, you can’t unsee.

The window of opportunity is open like never before. For the first time in human history, we have the world’s attention. Plandemic will expose the scientific and political elite who run the scam that is our global health system, while laying out a new plan; a plan that allows all of humanity to reconnect with healing forces of nature. 2020 is the code for perfect vision. It is also the year that will go down in history as the moment we finally opened our eyes.
Reactions: lizzywow, Manuel and One65

Good article and it is well worth your time to find out about Dr. Mikovits. You will have to search around because anything with her in it is being taken down by gulag and their tube - a sure sign she has something important to say.
Everybody all around the world - Gotta tell you what I just heard
There's gonna be a party all over the world
I got a message on the radio - But where it came from, I don't really know
And I heard these voices calling all over the world
Electric Light Orchestra
Reactions: Tania and One65

Interesting info about the hype around this:


Censors crack down on ‘Plandemic’ conspiracy documentary. What’s so dangerous about it?​
"Pulled from YouTube, censored in internet searches, and denounced by every single mainstream media outlet, what kind of information could make everyone so mad about ‘Plandemic’? We watched it to find out. A 23-minute teaser clip of the documentary went viral on Wednesday evening, notching up tens of millions of views across multiple platforms. However, a media outcry soon followed, with mainstream media outlets deploying their ‘fact-checkers’ to debunk its claims, and Facebook and YouTube removing the video, citing their new rules on Covid-19 “misinformation.” Yet censorship is also a sure-fire way to generate interest in the very thing you’re trying to censor – and multiple copies and versions of ‘Plandemic’ began to appear like mushrooms. So who’s behind it and what’s in there?"
https://www.rt.com/usa/488215-plandemic-conspiracy-documentary-censorship/​
My OBE Course: consciousness.life | My Services: laron.nz
Social Media: Facebook | Telegram Channel | MeWe
Reactions: June

I stopped watching when the "hero" of the documentary claimed to have isolated HIV, and according to journalist Jon Rappoport, whose info I trust and I have worked with extensively (Exit From the Matrix content), HIV has NEVER been isolated in a lab. There is a chapter on this subject in Jon's book AIDS, INC. , I believe.

Greg, the book was written in 1988. Not exactly up to date.
Second, Covid19 does have 4 isolated HIV gene components hooked up to a bat coronavirus native to a cave in inner China.
So, no, Rappoport the journalist does not have the latest information, and I would not trust him to keep up with the latest
in research methods either.

Even if you don't believe me, try the guy who won the Nobel Prize for discovering HIV: 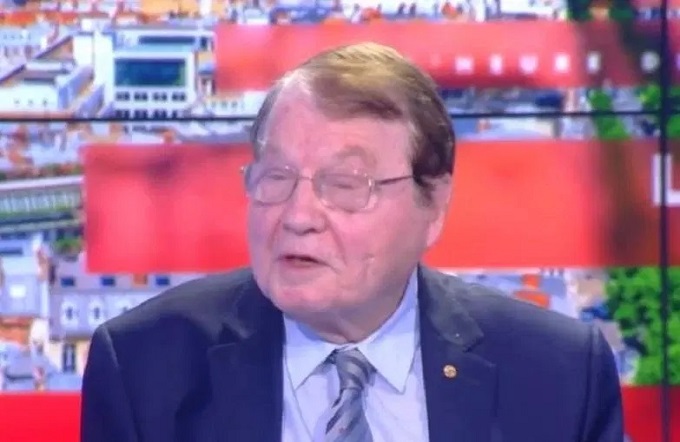 FRANCE (APF) – Luc Montagnier, the French virologist and Nobel Prize winner for his work on HIV, said the SARS-CoV-2 virus, was created in a laboratory by inserting genes from HIV-1, the AIDS…

Even he says Covid19 was lab-created with 4 isolated HIV genes inserted into a bat coronavirus.

Edit: Additional info - genetic sequencing and virus isolation were not available until mid-90s, and the computing power required to analyze DNA sequences not until the 2000s. So that book is even more out-of-touch now.
Last edited: May 11, 2020
Reactions: Linda and Hailstones Melt

Kevin C, thanks for that clarification.

Judy's book about all this, Plague of Corruption is published by none other than Simon and Schuster, the material and all claims fine tooth combed by their Attorneys prior to publishing. I find her genuine, and of a heart and mind to save lives and do the right thing. There are oodles of hours of interviews you can scour yourself on the altcensored website, where a lot of the interviews held with her end up. This one where she is interviewed by Dr. Mercola is a good beginning :

theGalacticTravelChannel said:
Judy's book about all this, Plague of Corruption is published by none other than Simon and Schuster, the material and all claims fine tooth combed by their Attorneys prior to publishing. I find her genuine, and of a heart and mind to save lives and do the right thing. There are oodles of hours of interviews you can scour yourself on the altcensored website, where a lot of the interviews held with her end up. This one where she is interviewed by Dr. Mercola is a good beginning :

Thank you for the added video. I have total respect for these 2 Doctors. Great information. Wish more people would listen/read more of the infomation available.
Reactions: theGalacticTravelChannel

I have to make a correction to my above statement, it was just pointed out to me that it is Skyhorse, who is in a distribution agreement with Simon and Schuster - who is the the publisher of Judy's book. It is a good video and talk, I agree, I hope many people will listen in, and continue to research and align with the narrative most synchronous with the greatest good.
Reactions: Jenniflower

Any video that has been taken down from any of the major uploading sites can be found on : Altcensored
Reactions: Jenniflower and buddy love

Hi OP. Will you be putting the movie on http://lbry.tv? It's free and decentralized and resistant to censorship. I have a LBRY account and can host the movie in parts if you like. buddy love

Also the link on Vimeo for the movie does not exist. I got an error from it.

I also hear Faceblock is blocking Brighteon and Natural News now too. https://www.naturalnews.com/2020-05-20-facebook-blacklists-free-speech-video-platform-brighteon.html
"When you censor a person you do not prove him a liar, you prove you fear what he has to say."

I also timed out on this site too, but I'm using a VPN that is known to use a third-party blocker that blocks sites like these.
Reactions: buddy love

theGalacticTravelChannel said:
Any video that has been taken down from any of the major uploading sites can be found on : Altcensored
Click to expand...

Great site with many posts - In fact, it is interesting to peruse it to see what was taken down recently - sort of a road map, if you know what I mean

Anyway, Plandemic Part 1 is on altcensored

I check it almost each day for this reason, to keep track of what is being removed and develop a semblance of a reason why. And of course to hear what those being censored are having to say.
Reactions: buddy love, Hailstones Melt and Linda
OP
B

Thank you all for keeping this thread going and updating the location to find the video. I am not online much anymore.

Yes, it is enlightening who and what is being censored and thank goodness for Altcensored and for Galactic Traveler for informing us of it.
Reactions: Linda
OP
B

therium said:
Hi OP. Will you be putting the movie on http://lbry.tv? It's free and decentralized and resistant to censorship. I have a LBRY account and can host the movie in parts if you like. buddy love
Click to expand...

The site you mention sounds like a GREAT spot for this movie.

Hi Therium. i am not the owner of the video/documentary PLANDEMIC.

plandemic the movie at DuckDuckGo

duckduckgo.com
perhaps someone in this search of sites can be the one you are looking for.

the more places online we can get this posted, the more folks are likely to see it!