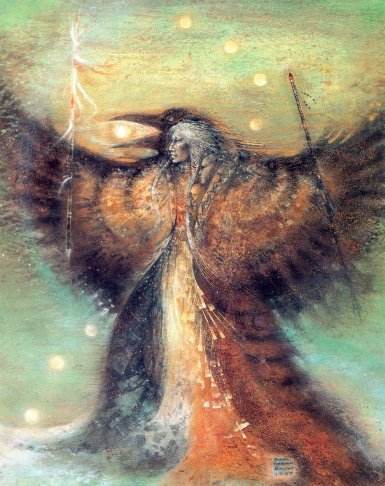 There's some powerful planetary aspects happening at this time.,

Yesterday, and still in effect Pholus conjuncts Quaoar, the impossibly hard to spell planet discovered in 2002 by Dr.Jane X.Luu and Professor David Jewitt at Hawaii's observatory on Mauna Kea, which is the first discovered beyond Pluto.

Mythologically Quaoar was a creator deity of the indigenous Tongva people of Southern California, who danced and sang the world into existence. Quaoar is the creative force of the Absolute, the metaphysical point from which chaos issues forth for the purpose of manifestation, shaping “All that Is” and asks what we want to do with the energy. To use it wisely we need to clear karma and ego attachment so as not to keep repeating the same patterns from the past.

Quaoar is associated with all forms of game playing, being creative and instigating change through having fun.
Pholus was the second centaur asteroid to be discovered. In mythology he guarded the sacred wine and died in an unfortunate accident when touching a poisoned arrow that had killed Heracles(although there are many versions) who was warding off wild centaurs trying to get to the wine.
Pholus's curiosity and willingness to help, his naivety too, led to his death so there is the influence of a fast transition to another state of being. Some meanings relate to addictions and old family patterns coming to an end and sudden light bulb moments of realisation.
Pholus also addresses the sudden unloosing of long-restrained energy, including in a family lineage. But the main meaning is release from the past and sudden transformation. Small cause and big effect .

As I am doing ancestral karma at present quite intensely I can relate to all of this as Pholus points to what we have taken on from our grandparents and great grandparents.
Recently I moved house and discovered my grandparents (whom I never met) graves and have learnt so much about them. Its opened doors to many revelations.

This conjunction takes place at 5 degrees Capricorn and is extremely long lasting but yesterday and today its exact .
Quaoar very much wants us to see the much larger picture which includes our origins on this planet, our reasons for being born here and living out our lives in the way we have chosen and accepting all that we are, even the darker sides of our stories.

It involves accepting that we are not just one story as in our own, but we carry the stories from our ancestors who came before us.
We must be aware of our mortality and all that we have carried with us- the strengths and weaknesses and also our best traits and talents and be aware that we will also leave our imprint on this good Earth for others to follow and be influenced by.
Our lives are important and have great meaning even though our physical presence will fade from this earth in the blink of an eye.

So Quaoar says to enjoy life while we are here as we are part of creation and Pholus is telling us not to be afraid of letting go of outworn old patterns that can keep us prisoner and stop us experiencing something greater. He makes us ask what it is we are guarding so carefully that could be a danger to ourselves and others and keeps us stuck even if we think its the right thing to do.

This aspect could bring up some very unusual situations for many people to finally accept and let go. It’s time to move on in quite radical ways for many of us.
This would be especially so for those born with planets or points around 5 degrees Capricorn and especially for those with Venus and/or Mercury there.
I do think Gemini type people also will be feeling these energies more than most due to the New Moon eclipse coming very soon.
As todays aspects are part of that being so close to the event.

Today Rx Mercury in Gemini 23 degrees is square to Neptune in Pisces. This is about vivid dreams and strong intuition with the creative forces out in full as well, especially with Quaoar so strong just now wanting us to dance and sing and use our own creative energies to reinvent ourselves and our lives.

This aspect is about secrets too, whether to let things stay hidden or to express them to others, maybe part of the Pholus effect as with Mercury backwards and Venus OOB it is a time of extremes.

One of the more intense aspects of the day is Mars opposing Pluto, Cancer to Capricorn at 26 degrees. This is an aspect of butting heads with authorities , especially in a family situation although it would have other effects as well.

This is like being between a rock and a hard place as there is an immovable force against a fiery blast with water also involved.
People with planets or points around these degrees will have some stories to tell of butting heads.
But this is also an aspect of explosions, collisions , especially so close to an eclipse.

All the planets at present are pointing to a tremendous force of power that has been held back for too long and is about to be released.

We are in the Balsamic moon phase which is an unfavorable time for beginning something new, but favorable for closing something, putting it behind us, and for endings in general. A time for personal reflection, tying up loose ends and getting ready for something very powerful and new about to be unleashed in our lives.

​
"We are endless galaxies but we have seen just one star."
My Astrology focused Facebook Page: Neptune's Magic