Locally my family members attended a secret Voices of Freedom meeting, and yes, it was secret as the organiser wouldn’t share the location until the morning of the event. There were around 200 people. Doctors were present to talk about the COVID vaccines. It is like a resistance situation here in New Zealand—this how bad it has got.

Basically there wasn’t much new information as my family and I are quite up to date on what’s going on, me especially as I have been studying and researching most days for months now.

However, two things are worth mentioning. The New Zealand Government have been trained in using fear tactics to influence people to take the COVID vaccinations. Psychologists are involved. Specific books were mentioned that they were using information from to manipulate and control the populace with fear. 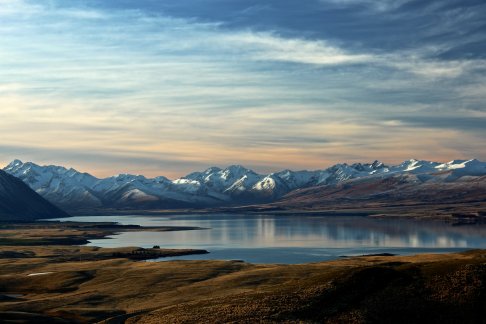 Lake Tekapo, New Zealand​
Secondly, the Centre for Adverse Reactions Monitoring (CARM) in New Zealand that tracks adverse reactions is overloaded, but also full of confusion. One doctor said they were put through to many different people on the phone and transferred to a coroner and then back to CARM multiple times. Finally someone at CARM was able to answer their questions.

This doctor was told that they had had at least 6,000 calls (adverse reactions) but they were not tracking all these correctly. I believe the official deaths logged from the COVID vaccines is around 100. Two people are dying from the vaccine every day, the doctor was told, and that New Zealand has a shortage of coroners.

But note that many doctors worldwide say that only 1-10% of adverse reactions are logged in systems like VAERS and CARM. So the true numbers of adverse reactions in New Zealand could easily be 120,000 with 2,000 deaths, if only 5% were logged. Only 27 people have ‘officially’ died from COVID in New Zealand. Note that the population of New Zealand is around 4.9 million. I can’t accurately say how many have been vaccinated yet.

I would be posting this on my Facebook account which has 34,000 followers, however, FB has yet again restricted my account, this time for a week for speaking out about the truth around this topic.
Last edited: Aug 14, 2021
Social Media: Facebook | Telegram | YouTube | Rumble
Lighthouse at the Oasis: Facebook | Telegram
My Services: laron.nz
Reactions: Margie, Snowmelt and Ascended1

Reads like shades of the American Revolution. A small percentage of the population accomplished the impossible.

A friend shares office space with two psychologists. They were in a discussion about clients wearing masks in the waiting room (my friend opposed and psychologist in favor). She realized part way through the conversation that they were attempting to manipulate her with their approach.
Everybody all around the world - Gotta tell you what I just heard
There's gonna be a party all over the world
I got a message on the radio - But where it came from, I don't really know
And I heard these voices calling all over the world
Electric Light Orchestra
Reactions: Laron
OP

Here's the vaccination numbers from the NZ Herald this morning. That would be 1.4 million vaccinated out of about 4.9 million. 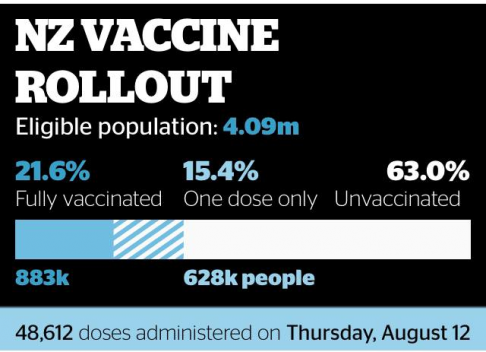 Going through this whole plandemic has been like watching a train wreck in slow motion. I got of the train a long time ago, yet I have to hope that enough people will wake up and put an end to this madness.
Infinite love and gratitude for all that you do and be to raise the consciousness of humanity
Reactions: Margie and Laron

How far we have come from the GCE days. I am so much in a better situation mentally, emotionally and spiritually to face whatever is coming in the future. How about you Laron?
OP

Ascended1 said:
How far we have come from the GCE days. I am so much in a better situation mentally, emotionally and spiritually to face whatever is coming in the future. How about you Laron?
Click to expand...

When I look back on the last 18 months or so, I see certain events, and the timing of those events, which have nudged me in a specific direction. That direction has lead me to not only coming into my power much more than before, but also bringing others together with a new group (Oasis at the Lighthouse) which I have more plans for.

Things are getting more difficult over here in NZ. We are looking over the ditch at Australia where they are now having some of the hardest lockdown restrictions in the world, similar to France. NSW State is going through hell. There's a lot of police abuse against the people too, surfacing in videos. The police are just doing their job, but there's the same old conditioning and values within the various forces globally—prejudices and so on—that exist, so when doing that job they are treating people in the same old way as always, just like many other countries. The MSM continues to push a false narrative and agenda with the help of big tech.

We are feeling that a full lockdown is coming, one that could last a while here. There's no community transmission but I'm sure they will create a situation that will make it happen. The Prime minster is heavily invested in playing out all the plans associated with the Agenda 21/30. One of my family members is now considering leaving the country with her family because of how bad it's getting. The problem is... where do you go? Egypt is really the only place I know of where you can keep extending your tourist visa forever and have a safe enough existence.

Facebook is on the verge of banning my account for good. I may still slip through if I am careful but it's getting closer to looking like I might loose that platform. I am heavily invested in it for my work, and with the people I can reach. (about 35K+followers/friends)

However, like you, when I am focused in, I'm mentally, emotionally and spiritually ready for this. This is one of the main reasons we are here.
Reactions: Margie, Snowmelt, Linda and 1 other person

Laron said:
The police are just doing their job, but there's the same old conditioning and values within the various forces globally—prejudices and so on—that exist, so when doing that job they are treating people in the same old way as always, just like many other countries.
Click to expand...

I watch this and wonder at what point they will see that they are using force against and harming their neighbors, friends, and family. At this juncture, they are able to see the people as faceless opponents, but the time must come when something wakes them up. In the USA, I see this behavior in urban police forces but not so much with sheriffs in less populated areas. The urban police forces have been willing participants in militarizing their organizations through all kinds of federal grants. Add to that all the TV and movie input about police fighting bad guys.

When our kids were very young, we taught them parents' full name and address, and to seek a police officer for help if needed. However, as teens, we taught them something else because now they were in another category - potential troublemaker. We taught them to politely give their names, ask for parents, and say nothing more. Yeah, its been a quiet and insidious process to remove the human element from the jobs.
Reactions: Laron

Earlier this year my car was rocked in my driveway by 3 hooligans (young thugs) who wore black hoodies and masks. I was in the car (I had provoked them, admittedly by shining headlights on their nefarious activities in my street). I rang the police from my mobile phone, while my car was being rocked. Then the phone rang - it was the police, to politely inform me that they wouldn't be coming to my incident because it was a busy Friday night. I lucked out. Would I like to keep him on the phone while I walked to my front door from my car and let myself in?
Vibrate in accord with the universal notes​
​
I see it's time to change my signature message. Out with the old and in with the new! ​
Reactions: Linda
You must log in or register to reply here.
Share:
Facebook Reddit Pinterest Tumblr WhatsApp Email Link