I cam't across this story today over on the Guardian:


"It was in May that the mysterious illness first took hold.​
​
In their isolated rainforest home in the Malaysian state of Kelantan, members of the Batek tribe, the country’s last indigenous nomadic community, began experiencing a fever and breathing difficulties. Then, one by one, they started dying.​
​
Over the past month, 14 people from the tribe’s village in north-eastern Peninsular Malaysia have died, and more than 50 have been taken to hospital. Some are still in intensive care and more are being admitted by the day. Forty-seven others have been treated for respiratory problems.​
​
The source of the illness in this small village of 300 indigenous people, known as the Orang Asli – a Malay phrase meaning “original people” – remains unknown. Local authorities have cordoned off the area as they investigate, testing for everything from infectious disease to pollution or poisoning from nearby mines, and have begun exhuming the buried bodies for postmortems."​ 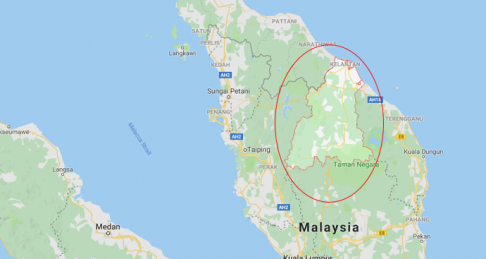 Kelantan State in Malaysia
​
Here's some information from Wikipedia on the Batek people:


"The Batek (or Bateq) are an indigenous people (numbering about 1,519 in 2000) who live in the rainforest of peninsular Malaysia. As a result of encroachment, they now primarily inhabit the Taman Negara National Park. They are nomadic hunters and gatherers, so the exact location of their settlements change within the general confines of the area that they inhabit. The common phrase used to refer to them, 'orang asli', signifies a diverse group of which the Batek tribe is a part. It means 'original people' in Malay and was probably first used to identify these people by Austronesian-speaking settlers who arrived by boat from the islands of Southeast Asia. The Batek people were first documented by Europeans in 1878, when explorer-naturalist Nicholai Miklukho-Maklai of Russia wrote about them. Until about 1970 much of inland peninsular Malaysia was difficult to reach for the purposes of logging, so the Batek were widespread throughout that region. Since it is now possible to harvest the trees in that region, the Batek are largely confined to Taman Negara National Park and the surrounding region."​
And here's some info from the modern challenges section of the wiki:


"External. disagreements become a little more tricky, since the Batek do not have leaders or a military, the Batek are generally at the mercy of the Malaysian Government. Malaysia does not recognize Batek sovereignty so during the 20th century the Government gradually encroached on the Batek land, to use it for logging and farming.[15] Since the 1960s the Government has encouraged the Batek to live in Pos Lebir and become non-nomadic farmers. Most Batek are unwilling to settle in Pos Labir because it has not been dedicated to the Batek, they would have to leave there if the Government ask and they would lose their nomadic lifestyle and their religion. One of the Batek summed up the situation by saying: “We Batek are rich if we have a cooking pot, digging stick, bush-knife, lighter, tobacco, salt and fishing pole. Also a man is sad if he doesn't have a blowpipe. We only want four or five sarongs, we don't need trousers. If we live here (in Pos Lebir), we need money, if we have money we buy a lot. But if we have no money, no problem, we reject possessions. When we live in the forest, we don't need them. We can dig tubers. If someone doesn't have food, others give it as in the old days."​
Many things come to mind around what the illness could be about. Has something been introduced to kill them off on purpose? Or perhaps it's a way for them to shift during these consciousness raising times.
Social Media: Facebook | Telegram | YouTube | Rumble
Lighthouse at the Oasis: Facebook | Telegram
My Services: laron.nz
You must log in or register to reply here.
Share:
Facebook Reddit Pinterest Tumblr WhatsApp Email Link