While many earth changes are occurring, including an increase in sink hole activity from around 2013 onwards, this is an important event because of the scale of it. 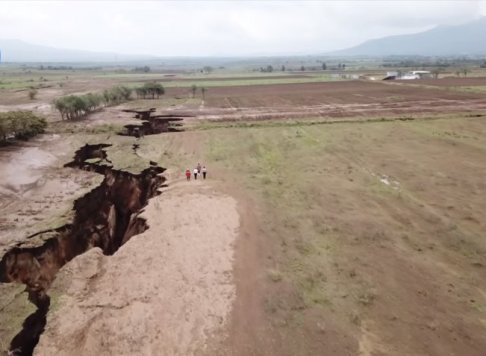 ​
Here's a YouTube video covering the story from two weeks back.


​
Here's an excerpt from an article on Science Alert at the end of March:

The tear, which continues to grow, caused part of the Nairobi-Narok highway to collapse and was accompanied by seismic activity in the area.

The Earth is an ever-changing planet, even though in some respects change might be almost unnoticeable to us. Plate tectonics is a good example of this."
​
Everything is connected. The consciousness changes continue on strongly and when something like this happens, it can be an indicator of a larger change over a shorter period of time, that effects not just the physical earth, but global consciousness.
Social Media: Facebook | Telegram Channel | MeWe
My OBE Course: consciousness.life | My Services: laron.nz
Reactions: Stargazer and Lila

The earth is such an amazing place and this is a stunning example.
Wonder what this says about the consciousness of folks in the area?
So tempting to drop in and look around (safely; on a tether perhaps).
I wonder what it would be like to live in the distance of the crack, on a straight-line direction from the current crack?
Reactions: Stargazer

As an amateur geologist this is nothing new to me. The great African rift is an old geological region where two plates are seperating from each other. Eventually a large chunk of Africa will seperate from the continent to form a new island. These are just a symptom of that geological process. Much like the mid Atlantic rift is pushing Europe farther away from North America. All it may take is a major cataclysmic Earthquake to fill the rift with sea water and get the process going full steam. No reason for the fear mongering related to this process.
You don't need anybody to deserve all of your friends, it's just the Love you've given... Yes
Reactions: Stargazer, Lila and Linda

We watched a news item about this and were surprised to hear an "expert" say it was just subsidence from recent rains. There are quite a few other experts saying it is a shift along plates that eventually cause a small part of Eastern Africa to split off. Like Lila, I would be interested in what it looks like deep within - with redundant safety measures.
Everybody all around the world - Gotta tell you what I just heard
There's gonna be a party all over the world
I got a message on the radio - But where it came from, I don't really know
And I heard these voices calling all over the world
Electric Light Orchestra
Reactions: Stargazer and Lila
You must log in or register to reply here.
Share:
Facebook Reddit Pinterest Tumblr WhatsApp Email Link