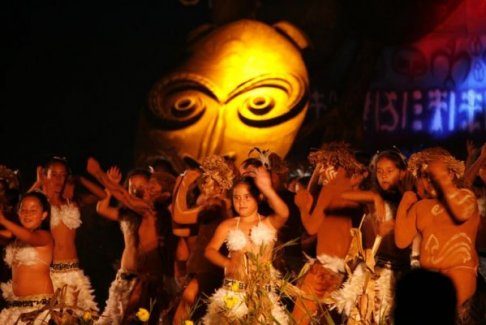 ​
Makemake, a new planet discovered in 2005, is a focus both today and tomorrow, forming first a conjunction with Mercury in Libra today and then tomorrow with Venus, which happens to be the day Saturn stations before going direct.

There is a reminder here that all souls are androgynous in their purest form and that it's necessary to find that balance of male/female within self no matter what gender we are, balance being the key word.

Being the second new planet to be named after an indigenous people's creator god of Easter Island, the astrology of Makemake is related to a profound love of the natural world and to the activism associated with defending the environment.

The wisdom found in nature is paramount with this planetary bodies affect on us and reminds us to climb out of our own swamp of density which is so easy to get stuck in, and to make sure we are using our own balanced creator energy in the best possible ways we can for self, but also to help the planet evolve, so there is no possibility of any form of destruction of our environment or endangerment to people as happened on the island of the people that knew this God.

The belief was that everything held a magical power , rocks, plants and animals , as everything in nature has some God energy in it and if only we can awaken ourselves to this and the miracle of nature all around us that we are part of, then life on this planet will be so much healthier and so much better and more peaceful, and in this case balanced as Libras energies are strong here.
Everything found in nature is valuable and has a form of consciousness that can reach us and also teach us.

This concept has been alien to the West during the reign of Christianity, which worships a single god and not nature. But now quantum science confirms that the sub atomic particles that make up the molecules in rocks, plants, water and animals are indeed made of a magical force or energy. They are not just inert, lifeless, solid bits.

Bearing this in mind I would expect Librans especially to have an enhanced awareness of messages coming through nature from spirit in the coming days , also Geminis and Virgos, Taureans too, with wakeup calls of various types as part of this experience.
This can happen on any level of our being.

Today our thoughts are being stirred to remember our inner spirit, as Mercury opposes Chiron in Aries . This can bring messages in itself from those who have wisdom but this could be challenging to those who do not want to hear, or be reminded of their own inner power. This in itself is like an awakening and can be disturbing.

Messages such as this could come from a source we are not sure of, or an unlikely person that we may not normally listen to or notice. Or might be an actual teacher or healer we are in contact with who speaks in a different way than others as if there is a message we have to hear at all costs.

Geminis and Virgos, Librans and Arians too will be most likely to hear these messages in this case but when the Asteroids or more remote planetary bodies are involved there is an effect there for everyone who needs the message or lesson.

Mercury in Libra is also quintile to Jupiter in Sagittarius which is available to enhance and empower us, and in this case there is a great blend of the practical details as well as the bigger picture or the “dreaming”, so that we can make manifest our visions or inspiration. Sagittarians can make good use of this also or that “type” of people.

There is some real magick around today if we dare to see it, tomorrow too, with Venus taking the place of Mercury to conjunct Makemake, and so enters the Goddess love, and the more hands on practical finishing touches to the deep awakening some of us are going through. This trio doesn’t happen so close together all that often.
Librans, Taureans too, and Arians can benefit from this one but so can the rest of us

Venus in turn opposes Chiron, bringing again the challenges of accessing the knowledge that comes from the inner self, the deepest realms of human psyche where all the unknowns lie.
Again there could be a close encounter for many with someone who has a message about our security zones and in this case how we love.

Mercury tomorrow will quincunx Uranus in Taurus so there will be a bit of a twist to how things turn out – probably not what we expected at all, but there is reassurance with this aspect that we will find the means to come up with unusual solutions to enable us to fit the missing bits together especially if we still feel a little scattered, as if there are fragments of self to gather together to make a whole, as there has been a new awareness of the various parts of our psyches , feelings of being fragmented for many with the effect of the last full moon, which was so multidimensional in its effect.
(Aquarians also take note).

Venus will swap places with Mercury tomorrow to quintile Jupiter which is an empowering aspect that will especially benefit Taureans and Librans, as well as Sagittarian type people.

This is an aspect of celebration as well and support from others who understand.

I love this as its on the day of Saturn stations so we can reassess all that he has taught us this year before he goes direct.
When he does get into motion again in the coming days, the blocks and restrictions- the difficulties with legal matters , finance, or the effect of people standing over us, or circumstances beyond our control, will slowly begin to ease and leave us free to carry on with our lives without so many rules standing in our way.

Capricorns of course will be happy about this and especially Cancerians, Librans and Arians as Saturn has been quite hard on these signs in the recent two years, bringing out their best but also their worse as he is a hard task master.

In his own sign Capricorn, he has been forcing us all in fact to work on weaknesses and improve our strengths. Now he is finally going to be heading directly towards a new sign which he will reach in March 2020.

Tomorrow the disseminating moon phase begins, a phase of for sharing information or/and conveying our awareness to those who are receptive..

"We are endless galaxies but we have seen just one star."
My Astrology focused Facebook Page: Neptune's Magic

I love this as its on the day of Saturn stations so we can reassess all that he has taught us this year before he goes direct.
When he does get into motion again in the coming days, the blocks and restrictions- the difficulties with legal matters , finance, or the effect of people standing over us, or circumstances beyond our control, will slowly begin to ease and leave us free to carry on with our lives without so many rules standing in our way.
Click to expand...