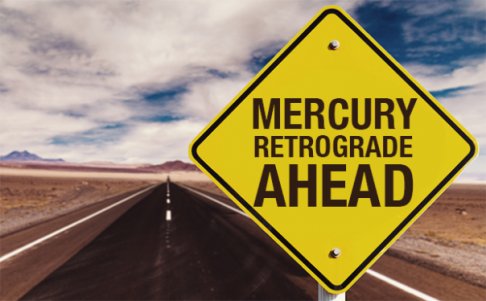 ​
The main feature of today is that Mercury in Aquarius since the 9th January stations before going retrograde until the 20th February and then remaining in the sign until the 16th March.

So this is one of those days when times stands still pretty much and there is a weirdness in the air that is hard to define.

Mercury in Aquarius can be quite radical in his desire to bear news of the more unexpected or shocking type just to keep us on our toes and also bring news of new methods of doing the same.

Mercury is quite a powerful force even though he is not one to take sides but is simply the messenger but we have all heard the various sayings such as “the pen is mightier than the sword” or “only through communication can life hold meaning”.

Mercury is lord of the dance when it comes to communication, media or networking of any kind.

And of course being in Aquarius for so long is bringing up for the world many changes in areas of modern technology and any form of media which is going ahead in leaps and bounds and almost every week we hear of something new in this field , although as we know most of it is being used in negative ways as these breakthroughs and discoveries come via powerful companies that wield that power over the common people as a test run.

Hence there is censuring beyond the norm, and apps popping up everywhere that we have not asked for or understand, to demonstrate what is ahead for mankind.

This Rx gives us a chance to look back on what we have learnt in that time and what we have heard, also the changes that have taken place in the last few months.

We have a chance to research and form new strategies, change our mindset if needed, go over old ground and catch up with both ourselves and the new systems being implemented, and whether we are feeling good about them or a bit “anti”.

Aquarius is good at the latter and will help us along with other Aquarian planets to think for ourselves this year.

It’s getting a bit like the AA prayer. “God, grant me the serenity to accept the things I cannot change, courage to change the things I can, and wisdom to know the difference.”
This would be a good prayer to include in our morning rituals or repeat now and again to help us maintain balance in our lives .

Mercury Rx is NOT a bad thing, as it happens so we do not get ahead of ourselves in any way and gives us time to take care of the little things we had forgotten about, and to gather more information or check what has happened recently.

It is true that minds and plans can be thwarted in this period, paper work may be held up which is out of our control, things can go missing but there is always a reason for this and besides, things and people can also turn up in the Mercury Rx time frame.

It’s important to be aware that there is “more info to come” when Mercury is backwards and always exciting when it finally does turn up when Mercury goes direct again.

Also there can be misunderstandings and we do need to pay more attention to listening well whatever sign we are.

Of course this is all more so for the Mercurial signs of Virgo and Geminis, as where would we be without these clever people to keep us informed of just about anything we need to know or for that matter that we DON’T need to know in some cases.

Aquarians also are able to rethink a few matters in this Mercury Rx period.

But generally this is a period for any of us to take time out if we need to.

The conjunction of Lilith and Eris in the last week activated something behind the scenes being revisited, and being part of the Full moon energy in Leo is showing that there is a lot going on in places too distant for mere mortals to see or know about which is an intriguing concept at this point of time.

There is still much to be revealed as Eris fights for justice and equality of all beings.

So Mercury Rx adds to this energy on a world scale as s/he can be very much about what’s happening behind the scenes..

Mercury Rx will be helpful in Aquarian areas such as groups, community and schools as this is the time of year when students are preparing for the study year and being integrated into the system again, which this year is very different to usual depending which country you are in.

Students have never been so disrupted in their learning processes and are being taught more and more on the media of internet, another Aquarian ruled area. Some of this is a good thing and other not so good.

The moon is currently in Virgo which is very good for helping us put on our thinking caps for this Rx period ahead. Virgos in fact will be feeling in their element.

Some important aspects are ahead as tomorrow Haumea and Makemake will station before Rx making their creator energy felt and giving us opportunity to review our own stance with regard to keeping this planet healthy to stop pollution and the interference of man in areas that could harm the forming of natural processes of life that were set in place for a reason to help mankind. As no matter how clever science is, it can never replace natural means of health and growth.

Tomorrow also Venus will enter Aquarius to join Mercury, Sun, Jupiter and Saturn, Pallas too, to add to the power of this New Age sign where the birthing pains are still in process for a better and freer world.

Venus in Aquarius is a more unconditional and objective Venus and although she is not so up close and personal, she will show her care and love for the future of our planet and the people.

Also positive of course for Aquarians who will get more loving attention than they have for a while for the coming 3 weeks or so. In fact Aquarians are much more likely than usual to stop holding people at arms length and get a bit more up close and personal.
There could even be romance in the air for some!

And Taureans/Librans will more than likely join a few more social groups and get busy with some voluntary work during February or find ways to use their own unique talents and abilities in brilliant ways.
"We are endless galaxies but we have seen just one star."
My Astrology focused Facebook Page: Neptune's Magic
Reactions: Lila

That seems a lot of planets in Aquarius now.

This thread reminds me of the changes to technology, social movements, communication, etc that you mention above: https://www.transients.info/roundtable/threads/share-your-social-networking-urls.8385/#post-60564. All these aspects seem to be there and it sure is confusing!
Reactions: Janne
You must log in or register to reply here.
Share:
Facebook Reddit Pinterest Tumblr WhatsApp Email Link