At a COVID anti-vaccination protest where thousands gathered in Parliament Square outside the Houses of Parliament yesterday, police are seen attacking a journalist, live streamer Resistance GB, aka Willsy, for no reason in this video below. Women were also openly punched by police. Willsy has around 35,000 YouTube subscribers and was covering the event. 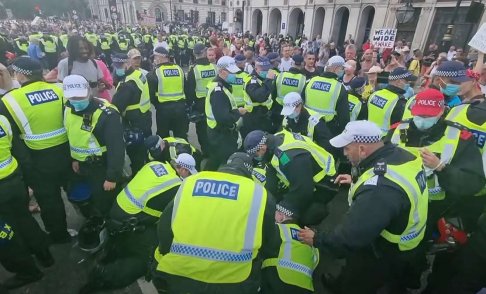 Police surrounding 'Willsy'​
Around 5:25 into the clip, a plastic tube appears by a female officer. A friend who's an English reporter said to me there's something disturbingly biblical about this scene, reminding her of a crucifixion.

My friend went on to say, "This isn't the England I know. We aren't French, Spanish or Italian. We don't easily take to the streets to riot. We all know we have different cultures in Europe. It takes a lot to get an English man riled. To see this worries me because I know after today's announcement which effectively bans half the country unless they get the jab from nightclubs, concerts and probably pubs and restaurants, this is going to get a lot worse."


​
Another video here on YouTube, which is age restricted so can't be embedded, is just about six hours long. Willsy is grabbed by police about 5:45:25 seconds in. This is his full coverage of the event just before he was attacked by them. If you listen to the end of the video, you hear people nearby saying how Will is such a nice guy and that this is assault what they are doing. "You beat up an innocent man," a woman yells.

Comments from the above Video:


"What a spectacle, completely unwarranted, this because he filmed the police getting heavy handed with a pensioner. Unacceptable behaviour I’m disgusted & lost all respect, nothing more than thugs. Hope Will is OK & he still has the footage he took."​
​
"He literally only stood up and raised his camera. I saw his stream. He did nothing wrong. ". This person replied to the previous comment with: "Exactly. Your observation matches exactly that which I saw live. He was standing still filming, nothing more, but had been singled out and pushed and separated away from the main crowd prior. I assume for the 'arrest' to be easier with fewer others around him." And a third person said this in response to the first comment, "I watched live stream too. Totally premeditated assault on Willsy. I saw it with my own eyes Live Streaming. He was suddenly pounced on for nothing. He had only just got to his feet after resting from exhaustion. Total thuggery by Police. Vile assault. Abuse of Powers. Battery. Wrongful arrest. The problem with Police is they have not one clue what they're doing other than they were ordered to do it. Just hired Thugs taking the shilling. The arresting officer here looked high as a kite on his adrenaline fueled assault. Thug."​
​
"We are witnessing the beginning of the most frightening period of government/police tyranny in our nation's history...."​
​
Willsy describes himself as an "on the ground reporter and researcher; filming and livestreaming; interviewing and presenting".. You can find his YT channel here and Telegram channel here.


Note I have downloaded a copy of this video in case the above one gets removed from YouTube. I'm sure there's already a copy on bitchute
Last edited: Jul 20, 2021
Social Media: Facebook | Telegram | YouTube | Rumble
Lighthouse at the Oasis: Facebook | Telegram
My Services: laron.nz

Statement from Willsy :
"I'm speaking to you from the police station: what happened today was a politically motivated attack in order to frame me, from which I’ve been physically injured, in order to silence independent journalists as we’ve been seeing for some time in this communist dictatorship. This will not be tolerated." 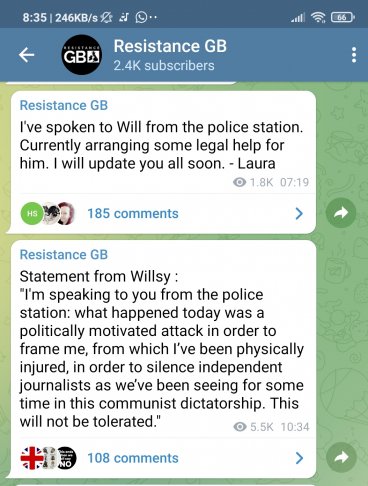 Laron said:
in order to silence independent journalists as we’ve been seeing for some time in this communist dictatorship.
Click to expand...

Not taking away from what has happened to him but he is confusing authoritarianism with communism... seems to be quite common now to label authoritarian and dictatorial behaviours incorrectly as 'communism'

I was there on Monday and the police tactics were provocative and heavy handed for what was a peaceful demonstration with a carnival atmosphere earlier in the day.
There were agitators who were identified by the crowd and pointed out to the police.
Some parents and children were caught up in the melee and emerged very distressed. The reaction and force used was disproportionate
Last edited: Jul 20, 2021
Reactions: Linda and Laron
You must log in or register to reply here.
Share:
Facebook Reddit Pinterest Tumblr WhatsApp Email Link