Is the Haudenosaunee Confederacy a Sovereign Nation (1 Viewer)

Before we get into this question, we need to understand the history of the game of lacrosse. Several high schools around me have lacrosse teams, as do some universities. While some of our sports grew from others, lacrosse has its own history.

The name comes from French priests in Canada who watched Native Americans playing their game with sticks - la crosse means stick. There are five tribes in the northeast US and southeast Canada that play this game. As time passed, many of the settlers in this area picked up the game.


Native peoples, particularly in present-day New York State and neighboring areas of Canada, continued to play lacrosse into the 19th century. English-speaking Canadians from Montreal were the first non-Native players. They began playing among themselves in the 1930s after having observed games being played by Native peoples. In 1856, the Montreal Lacrosse Club was founded, and the club’s founder codified rules in 1960. Compared to the Native game, these rules shortened the length of each game and reduced the number of players to 12 per team. The first official game played under these rules took place in 1867.​
​
In the early stages of this growth, Native teams were active participants. They played in competitions and demonstrations in the United States, Canada, and Great Britain. By the 1880s, however, Native teams were routinely banned from international competitions due to their dominance.​

Read about the history of lacrosse - the Creator's Game

Part of the move to obtain sovereign nation status goes back to the beginnings of the game. It has sacred origins. I've included the whole story below because I love it.


One of the core beliefs among the Haudenosaunee is that lacrosse is much more than a game.​
​
According to the Haudenosaunee oral tradition, the very first game of lacrosse was not played between humans, but rather was a game between the winged animals (i.e., birds) and the four-legged creatures (i.e., the land mammals). And while the story is told in slightly different ways among the various Haudenosaunee communities, one version is as follows:​
​
Our Grandfathers told us many stories that would relate to lacrosse and how one should conduct themselves and the importance of the individual to the game. Lacrosse was a gift to us from the Creator, to be played for his enjoyment and as a medicine game for healing the people. The Haudenosaunee people know that all creatures, no matter how big or small, are significant and have a contribution to make to the overall cycle of life.​
​
Long ago we were told the following story about a great ball game that took place between the four-legged animals and the winged birds...​
​
The captains for the four-legged animals were: The Bear - whose weight overpowers all opposition, The Deer - whose speed and agility to stop and go made him invaluable to the team, and The Great Turtle - who could withstand the most powerful blows and still be able to advance towards the opposition.​
​
The captains for the winged birds were: The Owl - who excelled in the ability to keep his eye on the ball, no matter what position or direction the ball may be traveling. The Hawk and Eagle - both excel in quick, swift movements. These three represented all the winged animals.​
​
While the birds were preparing for the game, they noticed two small creatures, hardly larger than a feather, climbing up a tree where the winged leaders were perched. Upon reaching the top, they humbly asked the captains to be allowed to join the lacrosse game.​
​
The Eagle, easily noticing that they were a squirrel and a mouse, inquired as to why they didn't ask to join the animal team. The little creatures explained that they had asked, but had been laughed at and rejected because of their small size.​
​
On hearing their story, the bird captains took pity on them, but wondered how they could join the birds' teams if they had no wings. After some discussion, it was decided to that they would try to make wings for the little fellows, but how would they to do it?​
​
By happy inspiration, one bird thought of the water drum that is used in social and ceremonial gatherings. Perhaps a piece of the drum’s leather could be taken from the drumhead, cut and shaped and attached to the legs of one of the small creatures. It was done and thus originated the bat. The ball was now tossed into the air, the bat was told to catch it. With his skill in dodging and circling he kept the ball constantly in motion, never allowing it to hit the ground. Through his impressive performance he convinced the birds that they had gained a valuable ally.​
​
The birds thought they could do the same for the squirrel, but, to their dismay, all the leather had been used on the making of the bat's wings. There was no time to send for more. At the last minute it was suggested that perhaps stretching the skin of the squirrel itself could make suitable wings. So, by tugging and pulling the fur between the front and hind feet, the task was completed and there originated the flying squirrel. When all was ready, they began the game.​
​
Eagle and Bear met, a face-off ensued and the flying squirrel caught the ball, cradled it up the tree and passed it off the Hawk. Hawk kept it in the air for some time. Then, just as the ball was to hit the ground, the Eagle seized it. Eagle, dodging and doubling, maintained possession and kept the ball from even the Deer, the opposition... the fastest of the four-legged team. Eagle then faked to Squirrel and passed to Bat, who moved in hard and left to score the goal. This goal won the victory for the birds.​
​
This story shows that regardless of how unworthy you feel an individual is that person may have qualities that could be a great help to you some day. (Source: Iroquois Nationals Lacrosse)​
Playing the game now as humans, sacred medicine is called as blessings and healing.


For the Haudenosaunee, lacrosse is a gift from the Creator, to be played for His enjoyment as a medicine game that heals and strengthens individuals, families, and communities. There is “medicine” in lacrosse if the game is played traditionally and with the right frame of mind. Specific medicine games continue to play an important role in contemporary Haudenosaunee community life. An individual player may call for a medicine game to bring blessings to a community or particular person. For example, if a player’s brother or sister is ill, he might call a medicine game to bring the sibling to good health. Many players will ask the spirit of an animal for guidance, so the he may have the eyes of the hawk, the toughness of a turtle, or the agility of a deer. Thus, while lacrosse is a sport pursued by non-Native players around the world, it is still a medicine game imbued with a sacred significance and special powers.​
​
Lacrosse also is viewed as a cultural legacy that succeeds in teaching the lessons of how to live a good life. The game demands teamwork, leadership, commitment, sacrifice, and physical prowess – virtues that benefit the Haudenosaunee on and off the playing field. The game serves as the bond that brings the Haudenosaunee together as individuals and nations and, as such, it is used for community advancement.​
In the quest to gain the sovereign nation status from the Olympics, the Iroquois Nationals won third place in the 2018 World Lacrosse Championships. However, when the teams were announced for the 2022 World Games, they were not included. Then something very interesting happened - the Irish team withdrew from the competition. That along with a outcry from other teams opened a position for the Nationals to compete. 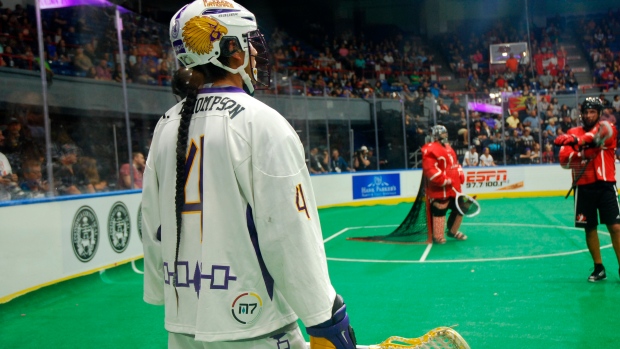 For me, this is one of those epic stories - rising up to reclaim a heritage. The other part that is of great interest to me is idea of sovereign nation status because this group is located within the boundaries of the US and Canada. I'll keep an eye on how this plays out because I'm rooting for them.
Everybody all around the world - Gotta tell you what I just heard
There's gonna be a party all over the world
I got a message on the radio - But where it came from, I don't really know
And I heard these voices calling all over the world
Electric Light Orchestra
Reactions: Bert, Manuel and Tania
You must log in or register to reply here.
Share:
Facebook Reddit Pinterest Tumblr WhatsApp Email Link