A little something I submitted to a local magazine for publishing. (Collingwood, New Zealand, M.A.D. Magazine)

What is the first sign of civilisation in a culture? Anthropologist Margaret Mead was once asked that question. Her response: a broken thighbone that had healed. Mead went on to say that in the animal kingdom if you break your leg you die.

Evidence of the femur healing shows someone was taken care of; they took the time to stick around, bound up the wound, and possibly carry the person to safety to be tended to through recovery.

In early December, The Free Marketeers at the A&P Showgrounds in Richmond started up.

The markets are open to all, with no segregation or discrimination—no vaccine pass and no forced use of masks, which science has shown are not effective and can lead to health problems and death.

Because of thought forms, masks also contribute towards fear and enslavement based aether energy. Such energy is used as a food source at a dimensional level not perceivable to the five human senses, but which an intuitive can observe.

The organiser once had a stall at the Motueka markets. The person responsible there started to enforce the use of masks for all stall holders, and implemented vaccine passports recently. As a result, a decision was made to create a new freedom based market, The Free Marketeers.

Last weekend the market was one of the largest I’ve come across in the district. As an energy healer and regression hypnotherapist (QHHT), I have contact with beings, and collectives, beyond our human reality, and work with energy on a regular basis. I attended this market last Sunday, a couple of weeks after having been there on their first day.

The market and community space, including the grassy areas where children played and folk of all ages sat, relaxed and ate, was just something that I’d felt was missing over the past two years—an integral part of what it means to be human that was ripped away from us.

People’s faces were visible (a rarity these days!), their smiles, laughter and pure joy expressed as they explored the array of stalls and took time to socialise. I came across an old friend I hadn’t seen for years. We chatted for a while, both having no worries in the world. 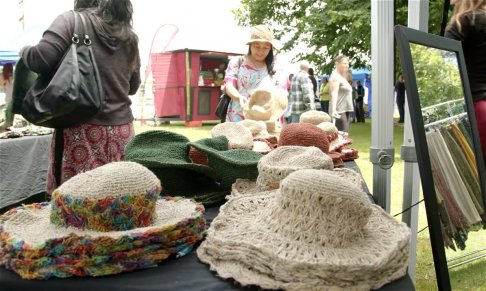 Photo: Parallel Media​
The grounds were bustling. With a variety of entertainment, including singers and buskers, over one hundred stallholders were present.

‘We live in a time where healthy human interaction is demonised. This too shall pass if the few of us left with sanity keep the flame of freedom burning,’ Charlie Chester says under a video put together and shared on YouTube by Parallel Media, who’re covering the markets. In another comment, Green Hills said, ‘Notice how people are standing together talking to each other. Never saw that on the other farmer's markets. This one is “vibing” high.’

Margaret Mead said helping others is where civilization begins.

As of today Motueka market now accepts people without masks and doesn’t force the vaccine passport.

With 2022 around the corner, it’s a perfect time for all of us to step out from under whatever it is holding us back, embrace Natural Lore/Law, and create, just like this fabulous market at the Richmond A&P Showgrounds on Sundays, 10am–3pm. I’ll see you there.

Laron said:
The grounds were bustling. With a variety of entertainment, including singers and buskers, over one hundred stallholders were present.
Click to expand...

This is when I feel hope for our future. People are deciding to live free and generous lives.
Everybody all around the world - Gotta tell you what I just heard
There's gonna be a party all over the world
I got a message on the radio - But where it came from, I don't really know
And I heard these voices calling all over the world
Electric Light Orchestra
Reactions: Laron

The New Zealander spirit that I have known is breaking out. I just can't believe they will accept the dome of control being lowered over them and holding them down.
Vibrate in accord with the universal notes​
​
I see it's time to change my signature message. Out with the old and in with the new! ​
Reactions: Laron
OP

Stuff finally did an article on this situation.

"A popular market in a holiday hot spot has been severely affected by divisions amongst its stallholders.​
​
Motueka Market normally hosts more than 100 stalls at its weekly Sunday event but more than half of its stallholders have left in favour of a market in Richmond set up under more relaxed Covid-19 regulations which a Motueka councillor says could be “careless”.​
​
The popular Motueka Sunday Market has a 24-year history of drawing the crowds and stallholders from all over the Nelson region, but sticking to Covid regulations has seen traders take exception and form their own weekly event.​
​
Motueka Sunday Market manager Judy Roper said she was “devastated."

https://www.stuff.co.nz/business/127399025/covid19-market-stall-holders-start-new-event-ignoring-safety-rules​
It's quite interesting as it seems that the authorities can't do anything about it and that Penny didn't need to implement natural lore yet to combat any closure orders or fines.
You must log in or register to reply here.
Share:
Facebook Reddit Pinterest Tumblr WhatsApp Email Link