How to Grow Fresh Air with Three Plants (1 Viewer)

In this four minute TED talk, researcher Kamal Meattle explains how an arrangement of 3 common houseplants, placed in specific spots inside — whether that's a home or office — can result in measurably cleaner indoor air.


​
Here's the transcript of the video:


Some 17 years ago, I became allergic to Delhi's air. My doctors told me that my lung capacity had gone down to 70 percent, and it was killing me. With the help of IIT, TERI, and learnings from NASA, we discovered that there are three basic green plants, common green plants, with which we can grow all the fresh air we need indoors to keep us healthy. We've also found that you can reduce the fresh air requirements into the building, while maintaining industry indoor air-quality standards.​
​
The three plants are Areca palm, Mother-in-Law's Tongue and money plant. The botanical names are in front of you. Areca palm is a plant which removes CO2 and converts it into oxygen. We need four shoulder-high plants per person, and in terms of plant care, we need to wipe the leaves every day in Delhi, and perhaps once a week in cleaner-air cities. We had to grow them in vermi manure, which is sterile, or hydroponics, and take them outdoors every three to four months. The second plant is Mother-in-law's Tongue, which is again a very common plant, and we call it a bedroom plant, because it converts CO2 into oxygen at night. And we need six to eight waist-high plants per person. The third plant is money plant, and this is again a very common plant; preferably grows in hydroponics. And this particular plant removes formaldehydes and other volatile chemicals.​
​
With these three plants, you can grow all the fresh air you need. In fact, you could be in a bottle with a cap on top, and you would not die at all, and you would not need any fresh air. We have tried these plants at our own building in Delhi, which is a 50,000-square-feet, 20-year-old building. And it has close to 1,200 such plants for 300 occupants. Our studies have found that there is a 42 percent probability of one's blood oxygen going up by one percent if one stays indoors in this building for 10 hours. The government of India has discovered or published a study to show that this is the healthiest building in New Delhi. And the study showed that, compared to other buildings, there is a reduced incidence of eye irritation by 52 percent, respiratory systems by 34 percent, headaches by 24 percent, lung impairment by 12 percent and asthma by nine percent. And this study has been published on September 8, 2008, and it's available on the government of India website.​
​
Our experience points to an amazing increase in human productivity by over 20 percent by using these plants. And also a reduction in energy requirements in buildings by an outstanding 15 percent, because you need less fresh air. We are now replicating this in a 1.75-million-square-feet building, which will have 60,000 indoor plants.​
​
Why is this important? It is also important for the environment, because the world's energy requirements are expected to grow by 30 percent in the next decade. 40 percent of the world's energy is taken up by buildings currently, and 60 percent of the world's population will be living in buildings in cities with a population of over one million in the next 15 years. And there is a growing preference for living and working in air-conditioned places. "Be the change you want to see in the world," said Mahatma Gandhi. And thank you for listening. (Applause)​ 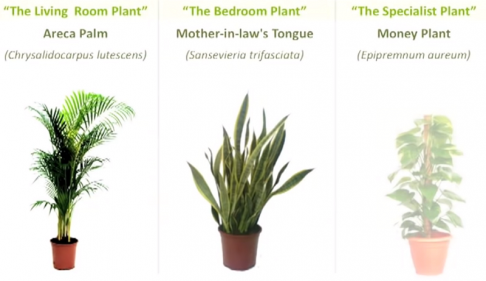 Very interesting! Thanks for sharing that.
Reactions: Lila and Laron

I have one of these plants in our bedroom where I feel the need for converting CO2 to oxygen at night, just like it says. However, it hasn't seemed to work. I now see that the amount of plant material needed (4 shoulder high plants per person) would predict this.
Very helpful for those of us who like to experiment with such things! Thanks.
Reactions: Laron
OP

In an IT job I left in Sydney back in 2013, I had this urge to get more plants in the office. It was a Government agency so wasn't that easy to make it happen as they already had a few plants which were serviced by a specific company that came in.

I created a raffle, where people put in some money and if they won they wont get one of three plants on their desk, in order (so we had 3 plants for the top 3 people that won). People got so upset when they didn't win and I seemed to have good luck, but there was no cheating! I used a random number generator to draw the numbers.

Anyway, point is... in the end, by the time I left, the office had a lot of plants I knew it was helping people. I wasn't aware of the science of it all at the time.
Reactions: Hailstones Melt, rixis, June and 1 other person

I'm totally interested in getting these. I'm just thinking damn, that's a lot of plants for each person.
While I would love to have a ton of greenery in my place, I just don't think we could handle it. Space wise. Money wise. And with two dogs and a kid.

But I think I'll at least start with a couple of these plants because of course, I want plants in here. Hehe
Reactions: Hailstones Melt, Lila and Laron
OP

I remember having tow or three bonsai's at one point, about 15 years ago. They were not easy to maintain and when I went away, they died as they were not taken care of properly. Indoor plants certainly take a lot of attention! When I got those plants I mentioned previously, they were from a local market in Sydney city. (Hay Market (aka Paddy's Market). They cost about AU $35-25 each. Good sized ones.
Reactions: Hailstones Melt and Lila

Angela said:
I'm totally interested in getting these. I'm just thinking damn, that's a lot of plants for each person.
While I would love to have a ton of greenery in my place, I just don't think we could handle it. Space wise. Money wise. And with two dogs and a kid.

But I think I'll at least start with a couple of these plants because of course, I want plants in here. Hehe
Click to expand...

Hot damn.
Vibrate in accord with the universal notes​
​
Question: How do you choose the higher vibrational energies in any given situation? "You choose by taking the high road, instead of engaging in the same argument that you’ve had several times with the same person. You choose by spending more time in nature and putting away your electronic devices. You choose by being true to yourself and the impulse that you have coming to you from within, rather than just doing what everyone expects you to do, or what your parents did." Quote from the Arcturian Council, posted December 5, 2019​

I'm a person who can nearly burn down my place by cooking on a stove behind me, whilst being too absorbed in the computer facing away from the stove. So I should make it my business to get some of these indoor plants, just to get some balance back into things.... could invigorate the brain a bit too!
Reactions: Lila

Mother-in-law's tongue is toxic to dogs and cats. Although I have some very old ones from my grandmother that none of our cats or dogs have ever bothered.

Just got one of those "nudges" to look the plants up, so I guess it might be important for someone.

The other 2 are listed as safe according to the ASPCA (American Society for the Prevention of Cruelty to Animals), which maintains a pretty good list of what is safe for pets.

I did find a link to an article that looks at the 30 best detox plants and safety with animals.