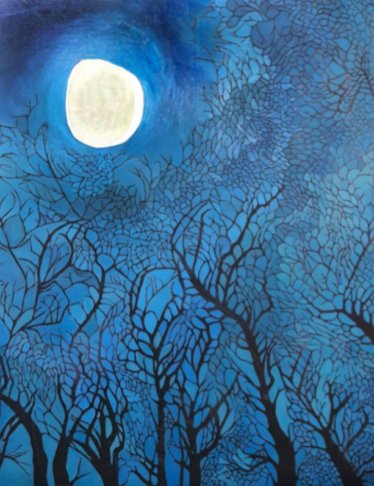 ​
Some Full Moons are different in how they present and will bring a lot of unusual happenings and strange reactions, strange phenomena too. (Hence my image for this one).

Its a VERY different Full Moon to usual with the strong aspect of Uranus and the Sun on the day. Its energy is a little out of shape and unusual, kind of "bent" energetically although Im sure it will look pretty much the same in the 3 dimensional world.

Today the Moon is Perigee so this means the Full Moon tomorrow will be more powerful in every way , higher tides for the ocean and also the inner earth and atmosphere around us , and within us too especially for the signs involved, Aquarius and Leo. It happens at 19 degrees.

Part of the intensity is due to the Mars/ Saturn effect just gone but mainly Venus opposing Pluto, the latter bringing in a rebirth influence that many of us have felt . I am seeing this in Leo and Aquarian type people , also Capricorns and Cancerians plus Scorpio type people, also Librans and Taureans. There is a lot of shifts of stuck places happening and amazing revelations happening, much soul searching.

The main aspect tomorrow of Sun square Uranus is already in effect so thats a bit of a lightning strike influence which is why I always mention tarot card "the Tower ", when it happen.

With regard to the New Age we are entering , Aquarius represents what we are all “becoming” in its purist form but in the last two years we have seen all the negatives of this sign which include areas like martial law, communism at its worst, a kind of Borg/hive mentality fueled by Governments world wide which is in turned fueled by the U N agenda for sustainable living and in fact this 21/30 Agenda is the main NWO negative of Saturn in Aquarius. Saturn brought segregation into groups that oppose each other as this sign does rule groups. Saturn has brought a lot of coldness out when it comes to empathy and equality.

Aquarius in its pure form is about Equality, care for the future of the planet in healthy ways, our environment included , and individuality that can bring out our best talents and traits without being slotted into little boxes. Its about the kind of freedom we have not experienced before in our lifetimes .

Jupiter entering Aquarius by 2021 to support the Aquarian age helped us keep our heads above water especially when he entered Pisces at the end of the year , which brought back common or natural law prompting study of the same world wide to get us all back to a time reminiscent of the Garden of Eden again before the serpent entered into the picture, and before Kings and Queens decided to appoint Governments to take charge of the ruling and organising of the people and the lands and laws which as it turned out didn’t work so well at all, and now is completely out of control which is not to say some form of New Age Gov will indeed be formed by the agreement of the people collectively in times to come but will be based on the old and natural laws that do not dictate or rule by fear but allow for free will.

This Full Moon in Aquarius is bringing that higher dimensional reality closer that we all are waiting for – one step more into the true New Age and this period now in fact is the best time to tune in and collectively visualize this New higher dimensional reality we are awaiting.
Globally and personally this is a turning point and for some it will be felt on inner levels, for others on physical outer levels according to our own natures.

The Leo /Aquarius axis is about choices between our "up close and personal" needs such as giving time to self and very close family and our own entourage of people, our own circle or environment, or giving time to group concerns and a more objective , community, global focus so this could directly or indirectly pull at us at this time..
For some this Full Moon could bring a major health crisis if the prominent signs feature strongly in your charts but a lot of stuck places will be cleared and th elight will shine through.

On the day of the Full Moon tomorrow which is 1 36 PM exact in NZ and earlier in Australia we have the powerful aspect of Sun and Uranus at 18 degrees Leo/Taurus, the aspect that can bring an unexpected event to our lives especially if we were born with a similar aspect in our birth chart. (I was).
This can mean globally or personally. It could be a sudden separation or change of mind or event to get us out of our comfort zones. This Full Moon is a little bit like an eclipse in fact

Sun rules Leo and Uranus rules Aquarians so its obviously that it’s a strong full Moon for these signs but surprise and change can be good afterall.

Venus in quintile to Uranus helps to enhance our best qualities as Venus moves into Leo on the day so this is a good thing and helps us to stay centred and to be mindful of self and our feelings . Its really a “me first” sort of Full Moon in fact and that is not a bad thing as if we are strong and proud of self in the Leo tradition then we are of much more help to others.

Although we may feel challenged or uncertain there are signs that the transformational energies on the lead up and on the day itself could bring many helpful changes in many lives, people too, so this adds to the effect of it being a turning point on so many different levels for many of us.

This may happen the week before , during the Full Moon or even the day after but with a Full Moon its usually easing off soon after the day itself.

Venus in Leo after being in the emotional sign of Cancer for over three weeks is ready to take charge and regain control and be centre stage in all her glory as she loves to show her best front when in Leo . We will all feel this energy in the form of using whatever effect the Moon brings to get ourselves on track no matter what and regaining our personal power
Venus is in her happy place so I think this will cushion any of the more disruptive element of Uranus and make it a highly positive full Moon for Leo and Aquarians types, Cancerians too being ruled by the Moon.

And certainly for Librans and Taureans, and the rest of us who need to shake off our darker energies and baggage we have been carrying and then shine our light more brightly, which is after all our birthright.


​
Last edited: Aug 11, 2022
"We are endless galaxies but we have seen just one star."
My Astrology focused Facebook Page: Neptune's Magic
Reactions: Lila and Thessa Thijs

Thank you thank you Janne. I read you and love it.

Felt a little frazzled yesterday, then realised it was full moon time !

Yes, shake things up. That is what I have been experiencing the last week or so. Knocking people out of their programmes.
Laughter is the sound of my soul.
Reactions: Janne
You must log in or register to reply here.
Share:
Facebook Reddit Pinterest Tumblr WhatsApp Email Link