Haiku in the time of Covid (1 Viewer)

This idea just popped into my head this evening. It might be fun to create our own poems. I like haiku because you get to the point quickly and in a surprising way. I think the reason it came to me is because of my feelings about living in the time of Covid. Like most people I'm cut off from a lot of communication - especially opportunities to tell my stories about nature, talking chickens, and friendly dragons to children. I suppose that is why I started a word of the day on a white board that I stand up in the front yard. Lots of people walk along our street, so it is my way of communicating. (I've gotten quite a bit of positive feedback.)

So let's communicate with each other here. Haiku is fun and not too hard to write. First, there is no rhyming and second, it is only 17 syllables. Ok, there is a catch - the words are arranged in 3 lines of 5, 7, and 5 syllables. The first two lines share observations and the third line is the surprise of how they go together.

Me, being me - here is a bit of history


The haiku first emerged in Japanese literature during the 17th century, as a terse reaction to elaborate poetic traditions, though it did not become known by the name haiku until the 19th century.​
​
Originally, the haiku form was restricted in subject matter to an objective description of nature suggestive of one of the seasons, evoking a definite, though unstated, emotional response. The form gained distinction early in the Tokugawa period (1603–1867) when the great master Bashō elevated the hokku to a highly refined and conscious art. He began writing what was considered this “new style” of poetry in the 1670s, while he was in Edo (now Tokyo). Among his earliest haiku is​

On a withered branch
A crow has alighted;
Nightfall in autumn.​
Click to expand...

After Bashō, and particularly after the haiku’s revitalization in the 19th century, its range of subjects expanded beyond nature. But the haiku remained an art of expressing much and suggesting more in the fewest possible words.​
https://www.britannica.com/art/haiku​
I'll go first and am hoping for some more!!
Everybody all around the world - Gotta tell you what I just heard
There's gonna be a party all over the world
I got a message on the radio - But where it came from, I don't really know
And I heard these voices calling all over the world
Electric Light Orchestra
Reactions: Lila, Hailstones Melt, Alain and 2 others
OP

quiet urban woods
where Comanche traveled through
hawk speaks to us all
Reactions: Lila

Five years ago I was learning poetry in a Writing Diploma and came up with a Haibun.

I had trouble with the haiku so some of these are in the incorrect format/style but still interesting.

I have chosen to look back at photographs I have taken of a trip to Peru that I took in 2011 and pick a few of the locations in the photos, and then focus on them for this series of haibun. Since we have to link them, I thought this would work well.

I took part in a guided group based tour of Peru and Bolivia in October, 2011. The focus of this experience was on the spiritual journey as the journey also involved a number of ceremonies. In Pisac, a small village in the sacred valley region was where our two hosts lived. Nearby, I stayed at a bed and breakfast that was walled in and locked shut at night. I befriended the owners dog, which was an old German shepherd cross. This dog came and found me one night while I was at my hosts residence. On a few occasions followed me around as I took a daily journey back and forth between there and the compound of the bed and breakfast. 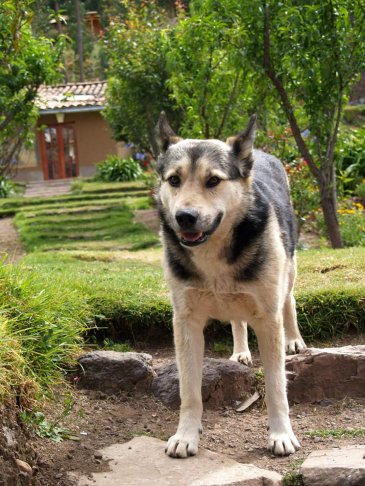 Pisac was a popular destination for tourists. Especially the market and stalls that were set-up in the town at certain times during the week. These markets were a place to find many cheap items, including vegetables, fruits and meats. People would come in bus loads from Cusco, a large city not too far away and which was the location I flew in. I purchased some crystals and some colourful embroidered mats while I was there. There were a number of cafe's and restaurants which had some great food as well.

Blue and white tents
Abundant wares to be had
Bartering, no choice 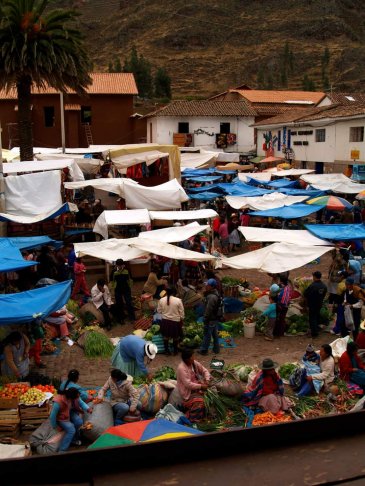 Within my hosts house was an amazingly designed lounge room, all wood, that overlooked the sacred valley. Pillows lined the short walls beneath the windows that reached to the roof and surrounded the entire room. Here we gathered many times to discuss the days events and it was here that we not only put together the concoction that we would later drink, that being from the San Pedro cactus, but our female host also made the best home made ice cream. It was a little touch of home as she was Australian, which was where I was from at the time. We would sit down here some nights and have a sugary treat.

Stranger to a land .
Ice cream brings me closer to
home, so far away. 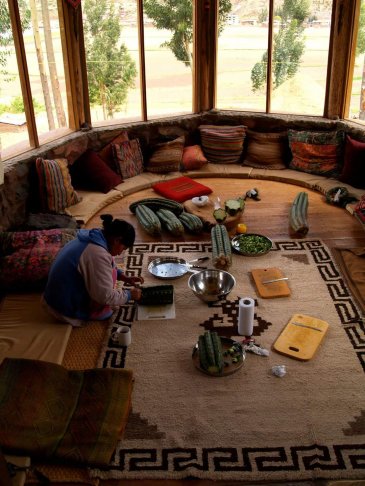 For two days we stayed in a hotel in a small town below Machu Picchu. In the mornings we would catch a bus and make the journey up the mountain to the scared site. On one of the days we sat in an alcove, under a rock within the sacred site and we consumed a half dose of huachuma so that we could connect with the energies of the land, since it was such a special place. Words are silly things when trying to explain the experiences we had there and it's just one of those situations you have to experience your self to fully grasp it. We needed two days as not only is Machu Picchu a large place, but the town it self had a lot to offer.

We sat at old peak
and connected with the land.
Brought closer to spirit. 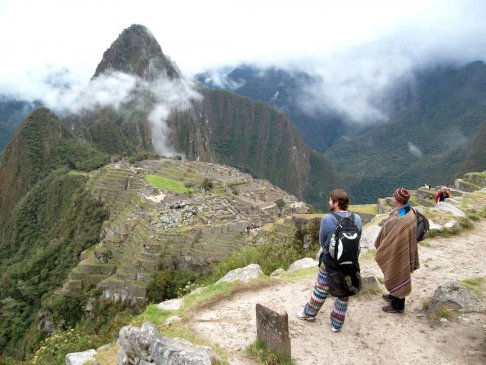 During our journey we stayed on two different islands that were situated on Lake Titicaca. While the whole trip was a very special experience, the lake had a breathtaking type of energy to it. When I say breathtaking, I do not mean the scenery, but the feel of the place as a whole. The lake is the largest in South America and the highest navigable lake in the world. A native Q'ero shaman joined us on this part of our journey. While with us, we hosted give different ceremonies where we would sit with him, and he would create a mandala while conducting the sessions nd the afterwards offering the mandala to pachamama, mother earth. During these sessions we would also be asked to chew coca leaves. 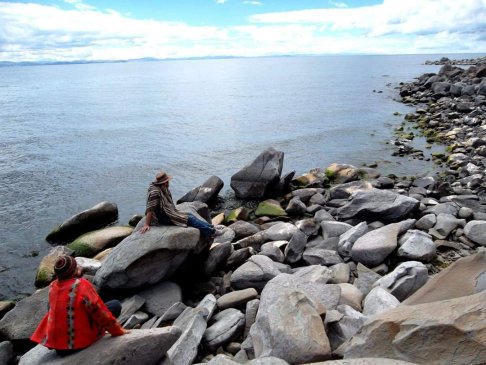 The Q'ero shaman was a healer and I had a personal session with him where he performed healing on me. It was an interesting experience as he had his own traditional techniques which involved certain Spanish based rituals, but also the use of musical instruments. So there was a bit of rhythm to the words he said at times. The healing session took place on one of those islands on lake Titicaca.

Calling the spirits .
A gentle energetic
touch filled my field. 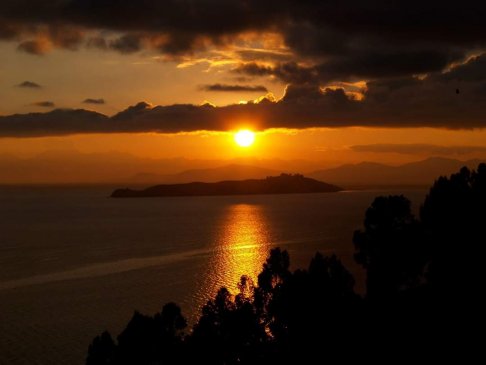 While staying in the city of Puno, which was probably my favourite city that I came across in Peru, we went and experienced the floating reed islands of the Uros. The Uros people still live on the islands but one could see that they had brought in a bit of technology as we were allowed to visit their rooms. The place was set-up in a very tourist type fashion, and this took away the authentic and natural experience for me. I wasn't impressed. As you might know, when you travel away from your country, you can come across locations that are not often visited by tourists, however, the floating islands were designed in the most efficient way to make as much money as possible as there were boats coming and going bringing large groups of people to the many different reed islands. There were multiple companies set-up performing this service.

The masses gather .
Standing on totora reeds .
Owned by the Uros.


I spent an extra week in Peru on my own, but with the guidance of my two hosts as I wanted to experience an additional number of plant medicine ceremonies. With one of these ceremonies I attempted ayahuasca, which is a more commonly known psychedelic, more so that San Pedro / huachuma. You had to be brave to consider doing this, as it is a somewhat more powerful experience in comparison to the huchuma cactus. It's really about letting go and letting the consciousness of the vine take you were you are best taken, based on your initial intentions and purpose, which should be either for reasons of healing or consciousness development and exploration. The Canadian shaman who lead my ayahuasca session said to me that ayahuasca is the way of the warrior.

Experience waves
of other worlds and places,
while cleansing takes place.

Expansion is found,
consciousness so deep inside.
Hidden memories


I wanted to finish this with a Haiku that would encapsulate the entire five week trip that I took. While at the time, I was already very knowledgable and had had real spiritual based experiences before, which included conscious astral projection, I had many validations come to me with the additional experiences, and it was important for me to visit some of those sacred sites and meet certain people along the way.

You know I was going to love this one.
Reactions: Lila and Laron
OP

Net of cobweb fine,
Green leaf edge to green leaf edge.
Sticky end for some.
Vibrate in accord with the universal notes​
​
I see it's time to change my signature message. Out with the old and in with the new! ​
Reactions: Lila and Linda

Never written these before. Feels like I turned a tap on.


Tiny vector of
Indigo space above me.
Buildings crowd it out.
Reactions: Lila and Linda
OP

You all ought to give it a try and see if it works for you. It is a cool rhythm.
OP

Sorting through the weeds
Wading in my veggie patch
I breathe in green life
Reactions: Linda and Hailstones Melt

Rocks: hard, crystalline
Slower life than mine or yours
Grounding, connecting
Reactions: Linda and Hailstones Melt

Cottontree fluff flies.
Get out snow shovels today.
But it's not winter.

(The fluff sometimes gets so thick I actually have to shovel it up with a snow shovel.)
"When you censor a person you do not prove him a liar, you prove you fear what he has to say."
Reactions: Hailstones Melt, Laron and Linda
You must log in or register to reply here.
Share:
Facebook Reddit Pinterest Tumblr WhatsApp Email Link