I awoke a little after 3 AM from this dream. Many people were gathered for graduation. There were some unseen folks who had a plan for the proceedings, but they were not ready when it was time to start. The crowd was growing restless so we started anyway and decided to wing it. There was supposed to be a surprise skit between another person and me, but it was not ready, either, and we improvised. It started like 2 valedictorians giving a solemn speech, when I took off my robe to reveal a gold sequin evening dress and the man took off his, showing his tuxedo. We sang a well-known song, but I don't recall the name right now.

Some people came up from the side and tried to stop the graduation for a funeral of well-known person, but we just kept moving on. Then some people were taking our cars. At first, I was distressed because my bags were in it, but my Father appeared with them, and I decided that I did not care about my car - no one else did either. We were moving on to the graduation picnic party. We were like a tidal wave that could not be stopped despite what others from the edges were trying to do.

The dream seems fairly straight forward, but wearing a gold sequin dress and singing in front a huge crowd is out of character for me. However, it is something that I would love to be able to do - like a special gift or talent.

Trying to disrupt the graduation with a funeral, also was interesting. It might even have some truth to it, as more evidence comes out about the misdeeds of higher-ups. Rather than get bogged down in the media circus, we elected to keep moving forward.

The car was the one I drive now and represents my old life. I did not care so much about it, but I did want my change of clothes for the picnic, which my Father so kindly arranged. I see this part as ideas, gifts, etc. that I've kept ready for the next place.

I was so enlivened when I woke up because of the mood and actions of those of us graduating. We knew it was time and we went on with the program. We were an unstoppable force sweeping past the distractions.

Gold sequins?! Beautifully in synch with what you describe about the content and feel of this dream

Linda, when I read your dream, I got struck with the name : Jayne Mansfield! Perhaps one of your multi-dimensional identities? I checked her website, and yes, there is a gold sequined dress! And on the clock, it's a couple of minutes to midnight.... 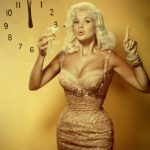 Vibrate in accord with the universal notes​
​
As long as bribery, intimidation, threats and blackmail are used to enforce public health, there is no real public health (Lisa Renee, creative commons 3.0 BY-SA, www.energeticsynthesis.com) July 2020​
Reactions: Anaeika, Pucksterguy, Pod and 4 others
OP

Hailstones Melt said:
And on the clock, it's a couple of minutes to midnight.
Click to expand...

It looks like a New Year's celebration to me!
Reactions: Anaeika, Hailstones Melt, Stargazer and 1 other person

Gold - in alchemy gold is the colour for God; new life or beginnings; your true self

I only had one dream about her, she was coming down some stairs to see me and she was wearing a floor length gold sequinned dress. Her hair was coiffed like Marilyn Monroe's and she looked utterly beautiful. So of course I researched gold dress in dreams to see what she was showing me.

The man in the tuxedo is probably your inner male......such balance.

I wrote about spiritual graduation to a mutual friend of ours Linda.....remember?

Congrats darling.
Laughter is the sound of my soul.
Reactions: Hailstones Melt, Linda, Anaeika and 3 others
OP

Spiritual graduation - that feels right. I also believe the many others in the audience were along the same path because I felt such a wave of people all moving in the same direction - toward the picnic.
Reactions: Anaeika, Stargazer, Lila and 1 other person

Interesting how the peeps on the sidelines were trying to halt the celebration with everything they had, even a funeral. But all kept going. Love it!
You don't need anybody to deserve all of your friends, it's just the Love you've given... Yes
Reactions: Linda, Anaeika, Stargazer and 1 other person

Pucksterguy said:
Interesting how the peeps on the sidelines were trying to halt the celebration with everything they had, even a funeral. But all kept going. Love it!
Click to expand...

It is never so interesting without the challenge. We create it all. That is why we must love the enemies, they are ourselves in another form to assist us.

Writing that brought me to my knees in tears of utter gratitude. Thanks Pucksterguy.
Last edited: Nov 10, 2017
Reactions: Linda, Anaeika, Stargazer and 2 others

QUOTE="Linda, post: 23963, member: 4"]Spiritual graduation - that feels right. I also believe the many others in the audience were along the same path because I felt such a wave of people all moving in the same direction - toward the picnic.[/QUOTE]


Yes my Loveling, we are nearly there.