I just woke up to find that Facebook and other connected apps, including Instagram and Whatsapp, have gone down globally.

I have a client coming up so I'm quickly gathering information on the situation. Use this thread to post about what you've run into.

From my new group, Lighthouse at the Oasis, we're all talking about the situation on Telegram here. Telegram is also having issues. People are suggesting that we save our channel / group / chat history on Telegram in case that goes down too.

Note that I will be editing an updating this first post as I go, so for now I won't be creating new posts in this thread.


Facebook, Instagram, WhatsApp Down Worldwide After DNS Records Vanish; Employees Badges Reportedly Not Working​
"Facebook appears to have more than DNS issues, as NYT's Sheera Frenkel reports:​
"Was just on phone with someone who works for FB who described employees unable to enter buildings this morning to begin to evaluate extent of outage because their badges weren't working to access doors.​
​
Internet security researcher Brian Krebs tweeted:​
Confirmed: The DNS records that tell systems how to find Facebook.com or Instagram.com got withdrawn this morning from the global routing tables. Can you imagine working at FB right now, when your email no longer works & all your internal FB-based tools fail?​

To be more precise (and Geek Factor 5) the BGP routes serving Facebook's authoritative DNS were withdrawn, rendering all Facebook domains inaccessible. That's per @DougMadory , who knows a few things about BGP/DNS.​
Click to expand...

This may suggest Facebook's internal systems are down. DNS issues that affect the website don't hinder employees from entering buildings."​
https://www.zerohedge.com/markets/facebook-instagram-whatsapp-experience-global-outages​
Facebook and some of its apps go down simultaneously.​
"SAN FRANCISCO — Facebook and some of its apps, including Instagram and WhatsApp, appeared to go down at the same time on Monday for many users, who turned to Twitter and other social media platforms to lament the outage. The social network and its apps began displaying error messages before noon Eastern time, users reported. All of the company’s family of apps — Facebook, Instagram, WhatsApp and Facebook Messenger — showed outage reports, according to the site downdetector.com, which monitors web traffic and site activity."​
https://www.nytimes.com/2021/10/04/technology/facebook-down.html​
​
Facebook plunged into chaos as employees ‘CAN’T ACCESS’ servers – or even their workspaces​
Facebook’s offices are as much of a mess for employees as its social media platforms are for users, according to anonymous workers who’ve spoken to reporters in the midst of the apparent companywide breakdown. As the major Facebook outage dragged into hours, a Reddit poster claiming to be a member of the “recovery/investigation team” wrote the companywide snafu was indeed a “global outage for all FB-related services/infra[structure]” and explained that while repairs were underway, “the people with physical access is [sic] separate from the people with knowledge of how to actually authenticate to the systems and people who know what to actually do, so there is now a logistical challenge with getting all that knowledge unified.” Facebook’s DNS [Domain Name Servers] were down due to what several commenters suggested was a configuration change that took effect right before the mega-crash.​
https://www.rt.com/usa/536576-facebook-offices-chaos-dns-outage/​ 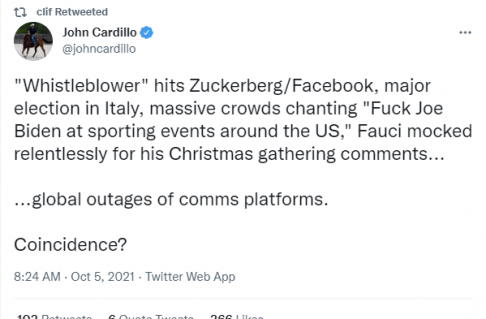 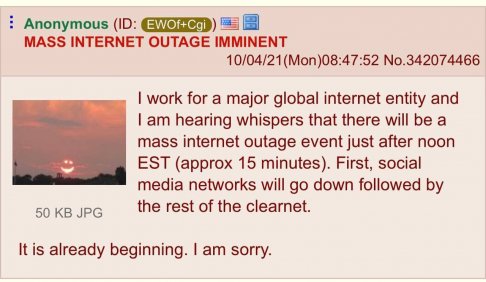 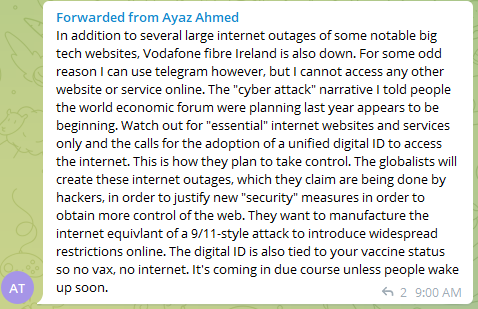 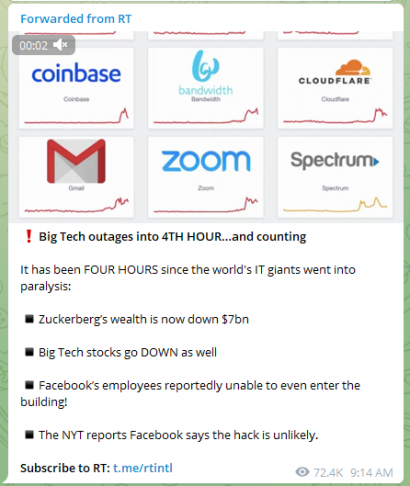 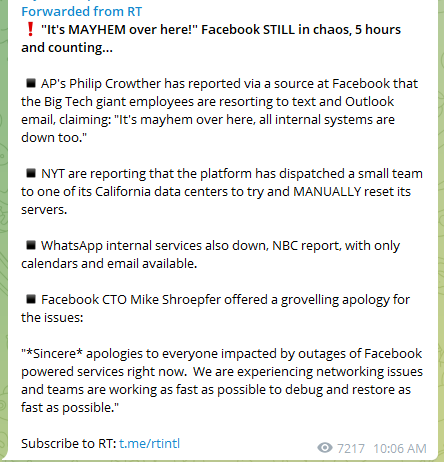 shit just got more real, jep here in switzerland fb is out too. gotta go get some popcorn and watch whats next!

FB and Insta down in DE too. Hope they stay down FOREVER.
Not formed into anything as regards characteristics or colour, naturally void, is the very Reality, the All-Good.
- The Tibetan Book Of The Dead
The Void (Article, Out-Of-Body-Boards)

honestly, if they stay down forever, i see a lot of people going really batshit crazy. i am not sure i am ready for that just yet XD

Lilia said:
honestly, if they stay down forever, i see a lot of people going really batshit crazy. i am not sure i am ready for that just yet XD
Click to expand...

FB addicts are batshit crazy already, so what difference does it make ?

Sinera said:
FB addicts are batshit crazy already, so what difference does it make ?
Click to expand...

true that... but the difference is, have you ever seen a cocaine addict who ran out of drugs? they can get... icky and violent XD while they are kind of functional as long as they get their fix
J

I've been up since 4am in Australia, and no FB here either.
OP

Lilia said:
true that... but the difference is, have you ever seen a cocaine addict who ran out of drugs? they can get... icky and violent XD while they are kind of functional as long as they get their fix
Click to expand...

If FB stays down too long, people are going to go crazy! So many live on it in addition to using it as their primary communications method for family and friends.

It also is a primary source for businesses.
Everybody all around the world - Gotta tell you what I just heard
There's gonna be a party all over the world
I got a message on the radio - But where it came from, I don't really know
And I heard these voices calling all over the world
Electric Light Orchestra

Just now - working in France and California but not Texas.
OP 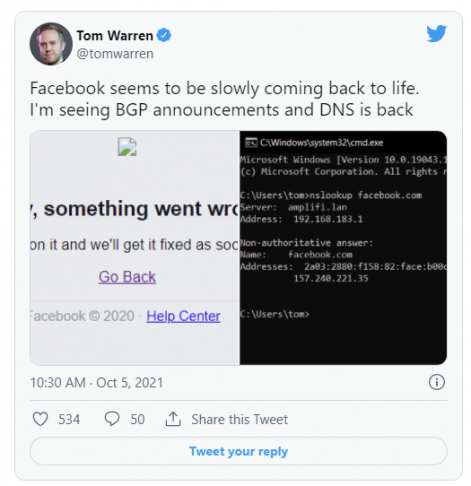 huh, i went on fb to see if it is still down, and... i must say, i am surprised at the level of disappointment i felt when it was online again
Reactions: Laron and Linda

The US military has taken over the major Internet nodes that carry traffic, hence they have also taken over FB, IG, Whataspp.
What happened over the past year (including twitter, Apple) with the censorship of the President as well as the complete "shutdown" of the federal EBS system through Google/Apple/Amazon smartphones/devices/TVs, basically amounts to treason.

This makes sense because even the FB employees were shut out of their own servers/workspaces/etc
(I don't know about other companies like Google/Amazon but I suspect the same thing may have happened to various divisions, especially the censorship / hate / race / vaccine groups) .

For those curious, note that after the shutdown, Trump's twitter and FB accounts are back online. Recall what these ass companies said about Trump censorship? They were going to shut him down for two years or more.

Yes, this is also related to the FB "whistleblower" testimony happening this week in Congress.

We are seeing the "election audit process" + "presidential election situation" coming to a conclusion this month.
In case anyone else is wondering, Trump is still de facto president. He basically gets a free 4-year term due to the "WW3" internal declaration.
This is why you are seeing MSM starting to talk about Trump 2024 election campaign moves.
Fake Biden has been used as a puppet (recall the fake "Hunger Games" inauguration ceremony).

The US has been on war footing since March 2020. Everything that happened afterwards have been put into war context (including the 2020
election, Dominion, Solarwinds, foreign interference, domestic traitors, hackers, the whole gamut).

Also.... Note MSM has been slowly adjusting their messages (forced by the US military for treason and the EBS system censorship, threatened with the FCC license cancellation) and beginning to report on the Democrats/traitors/fake Russian collusion and "F**k Joe Biden" chants.
They obviously can't censor the idiot liberals like Joy Behar, Joy Reid, Chris Cuomo, etc. because that would be too abrupt/obvious.
Reactions: Laron and Linda 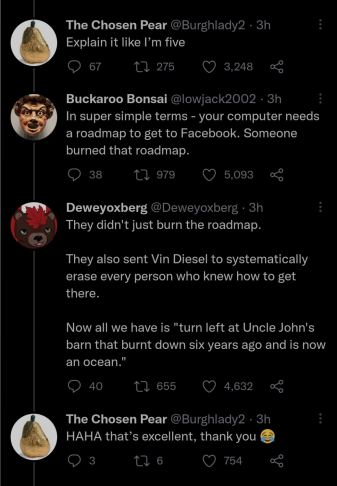 Kevin C said:
For those curious, note that after the shutdown, Trump's twitter and FB accounts are back online. Recall what these ass companies said about Trump censorship? They were going to shut him down for two years or more.
Click to expand...

I had his Twitter bookmarked years ago, just clicked but on mine it is still is suspended. Does he have another account there? They could be fake/prank ones, I think this 'was' the real one here: https://twitter.com/realDonaldTrump

i just read this article and it raises some really good points to consider: https://off-guardian.org/2021/10/06/the-real-story-behind-facebooks-terrible-horrible-no-good-very-bad-week/
Reactions: Laron

Article makes good points and seems a likely scenario. Thanks for posting.

Facebook might be notionally in the media crosshairs, but that is a pantomime. The real targets are alternate platforms like Telegram, Gab and Parler, or as yet unborn independent outlets. ​
​
More broadly, it’s part of an ongoing campaign against the ability of millions of people to freely communicate with each other, because that is a genuine threat to both the power of the state the and greed of corporate monoliths.​
​
So, when big government and big tech fight, refuse to pick a side and don’t believe a word of it. ​
​
They like each other really, but they hate you.​

Sinera said:
I had his Twitter bookmarked years ago, just clicked but on mine it is still is suspended. Does he have another account there? They could be fake/prank ones, I think this 'was' the real one here: https://twitter.com/realDonaldTrump
Click to expand...

I checked before I wrote that post. It was up and online then. Same for Trump's FB.
The military is allowing the games to keep playing, that would be my guess.
Look at all the alt, vaccine, conservative, other opinion bans/censorship. Censorship is still on.
Linda's post above underlines the situation - no matter what the platform, as long as the governments own the critical infrastructure nodes, you will always need to "play ball".
Along the same lines - three aircraft carrier groups representing 6 countries are in Western Pacific, north of Taiwan and waiting while China keeps sending fighter planes into Taiwan's airspace daily and in increasing numbers.
"Wag the Dog" tactic from China coming....
As Linda mentioned in another thread, China is in bad domestic shape. Property market implosion, developers are bankrupt while banks are being left holding almost $1T USD in baggage (keep in mind the local governments also went deep into dark-finance debt - i.e., borrow money illegally/under the table), and the nationwide blackout will exacerbate the financial implosion since they have to pay sky-high prices now for emergency coal imports.
Reactions: Linda

it seems like the fb outage/social media and general internet regulation agenda is just one aspect of a larger game thats at play here... there have been outages in the banking system too, and those are not the only incidents that let those who have heard about it think of the cyber polygon drill thing...