Representatives have filed impeachment papers for Bidan; however, it only gets the issue on the record because Pelosi controls the House of Representatives, which is the body that brings the charges to the Senate for trial. I'm not seeing her allowing that right now. So, a nothing burger in the USA.

However, Col. Richard Kemp, CBE, (retired from the British forces) has something to say about this matter. He was in command of British forces in Afghanistan in 2003 and went on to head the international terrorism team at the Joint Intelligence Committee for the British government - so he knows a thing or two.

Colonel Kemp in an earlier interview on GBNews said, “From the moment President Biden ‘made that decision to withdraw without any regard for the security situation in Afghanistan… this situation was absolutely inevitable.”


During his interview with Mark Levin Col. Kemp said the fall of Afghanistan has devastating effects on NATO. “President Biden has completely destroyed his credibility single-handedly… Al-Qaeda and the Islamic State are strong in Afghanistan. They will operate freely. And they can operate more freely than before 9-11. Jihadists from around the world will train, flock to Afghanistan… There is no one more who is cheering this than Russia and China. They will now see they have pretty much an open field… ​
​
In my opinion. I don’t say this often, and I don’t say this lightly. And I’ve never said this about anybody else. Any other leader in this position. People are talking about impeaching President Biden. I don’t think President Biden should be impeached. He’s the Commander in Chief of the US Armed Forces who has just essentially surrendered to the Taliban. He shouldn’t be impeached. He should be court-martialed for betraying the United States of America and the United States Armed Forces.“​
Regardless of our opinions about foreign interventions in other countries, one thing we likely would agree on is that you don't just walk away and leave people who are likely to be tortured and/or killed because of their association with the foreign country. Bidan's incompetence now is front and center on the world stage. 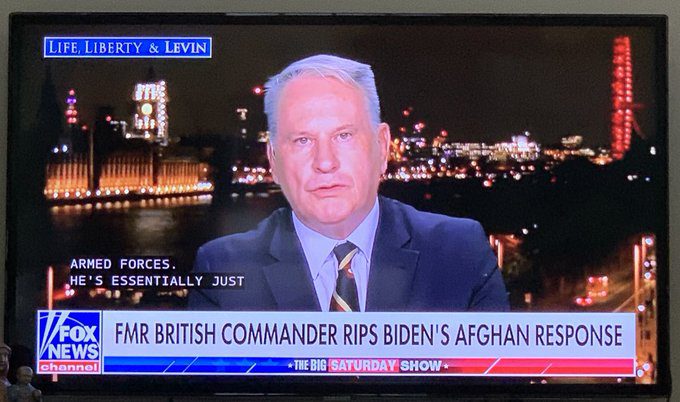 Col. Richard Kemp, CBE, joined Mark Levin on ‘Life, Liberty & Levin’ this week following fall of Afghanistan. Colonel Kemp in an earlier interview on GBNews said, “From the moment President Biden ‘made that decision to withdraw without any regard for the security situation in Afghanistan… this...

www.thegatewaypundit.com
Everybody all around the world - Gotta tell you what I just heard
There's gonna be a party all over the world
I got a message on the radio - But where it came from, I don't really know
And I heard these voices calling all over the world
Electric Light Orchestra