What if Russia were the first to step foot on the Moon? That’s the foundation of Apple’s upcoming TV series, For All Mankind, created by Battlestar Galactica’s creator, Rondald D. Moore. 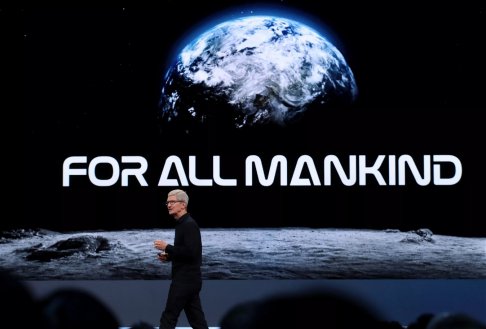 ​
Moore was also involved with producing and writing episodes for Star Trek: The Next Generation, Star Trek: Deep Space Nine, and Star Trek: Voyager, including a few of the Star Trek TNG movies.


​
The story is focused on the US space race, which never finished in the timeline of the show, once the Soviet Union ends up walking on the moon based on the preview above.

As you may already be aware, the Space Race was a big part of our history in terms of how it influenced life. It lead to sophisticated consumer technologies ranging from laptops, video game joysticks, satellites, freeze drying, and virtual reality, to non-consumer tech such as water purification systems, landmine removals, solar cells, and food safety procedures adopted by the U.S. Food and Drug Administration.

How will the future of technology end up in the show, based on quantum leap breakthroughs made during the space program if Russia takes the lead?

Joel Kinnaman is probably the most well-known actor in the show, but there’s a few other familiar faces.

This show looks exciting and I’m looking forward to it! (That’s if it becomes available on a streaming service in NZ at some point…)
consciousness.life | laron.nz | facebook.com/laron
Reactions: Lila

From that trailer it looks to me like the usual US anti-Russia and pro US space (military) force propaganda. It is applying the usual alternative history trope, but still with the usual ideology kept in place who are the 'heroic' and 'good' and who are the 'bad' ones (Russians!). You can almost unmistakably infer this from the scenes.

I'd rather see a science-fiction movie about the breakaway civilisation and alternative secret space travel that is possibly taking place already. They dare not do this of course.

And what if the US really weren't the first - or at all - on the Moon?

Let your truth be authority, never authority be your truth.
Reactions: Lila

Considering the creators background, we may be surprised at where the show heads, including star ships and space exploration and aliens...