Letters Live is a reoccurring event hosed at London’s iconic Freemasons’ Hall. The last event that took place was in October last month, and featured Gillian Anderson (X-Files), Jude Law, and a range of other well-known...
Click here to continue on to the original article. 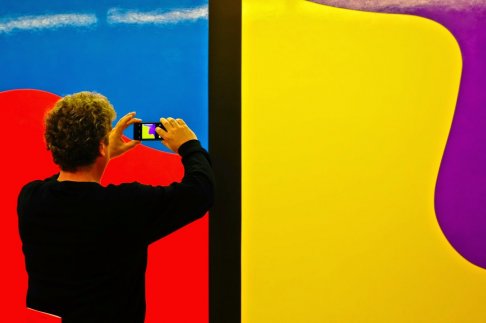 These are panoramas that I took of Sol LeWitt's art installations at the MOCA, the Massachusetts Museum of Contemporary Art in North Adams in the western part of the state. His art is on two floors. The human in one of the photos is my husband. He had a museum program in his back pocket which created the unexpected illusion that he was inserted in the painting.
Reactions: Stargazer and Laron
OP


Krena said:
He had a museum program in his back pocket which created the unexpected illusion that he was inserted in the painting.
Click to expand...

It does look like he is part of the image!
Reactions: Stargazer and Krena

I am sorry, but it is hard to see the huge scale of his art, because of the way I shot his work, though a better indicator is that you can see it is taller than my husband. The paintings are 30-40 feet long (an estimate after my husband and I discussed it).
Reactions: Stargazer and Laron
You must log in or register to reply here.
Share:
Facebook Reddit Pinterest Tumblr WhatsApp Email Link