Eliminating Races in Control and Destroying Their Collective Unconscious (1 Viewer) 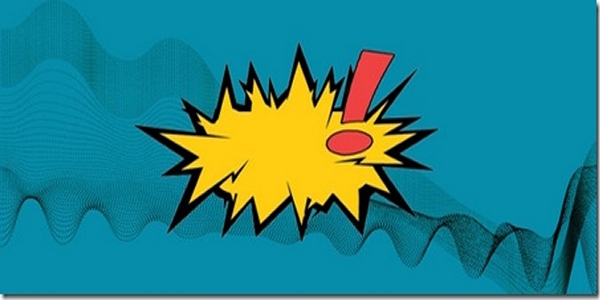 History has always told us that, when humanity sets out to try to advance in its evolutionary path, the laws that govern macro-planetary processes and those energies that we tend to face as action-reaction, cause-effect, tend to be magnified, like an elastic band that is stretched towards one end will try by all possible means to...
Click to expand...

I am feeling excited by reading and catching up on this post, which I had put off for a few days due to other commitments.

For in the first phase of the request to our Higher Selves to ask for elimination of the entities of the Amoss, Asimoss, Zul and Alimoss consciousness groups, David Topi suggests that we ask our Higher Selves to give us a sign or synchronicity so that we may ourselves see the veracity of the existence of these entities in our actual lives, in a way that collaborates with everything David Topi is saying in his article. In other words, to give us an internal buy-in so that we may take the step and activate the battle cry to drive these entities out of their parasitic hold and monitoring of our lives, and into the solar system's energetic dumping place, where their molecules will energetically disintegrate and after such purging, they will energetically have the chance to coalesce into something else hopefully on a positive evolutionary path.

Well, I did not have to wait long to get my synchronicity. Here in Western Australia, there is a small, rural town outside Perth called Moora. There is a strong, cohesive Aboriginal community there. Because it is a small, family-oriented community, people socialise by going to other people's houses, as opposed to going out to clubs and bars (as they would in a city). Last Saturday night, a young Aboriginal woman, 30 years old, mother of a 6-year old, went to the Moora speedway for a night out, and met a young man (21 years old) called Amos Ryan Gunn, and went to his place. It was less than an hour after they met, that an argument broke out, and he strangled her with his bare hands. He hadn't been in the town long, only a couple of months. In other words, an outsider. Numerologically, the date of her death was a 22 (master number).

This is subjective, not proof positive that something evil stalked that town. But David's article was posted on March 17th. The murder took place in the late evening hours of the 16th. Because their influence is parasitic and invisible, we are at risk at all times of meeting circumstances where events/timelines can be manipulated, and a positive event be turned to a negative one. I for one will sit up and take notice when a synchronicity like this occurs. As David says (and many others confirm this in their own narratives) our universe is holoquantic, meaning the quantum movement between multiple dimensions is done in a holographic way.

I didn't need this evidence to want to jump in and make the request to my HS, however, I do understand people taking caution as the unprotected are at risk from controlling negative elites and entities outside our world knowledge. I do think David's strategy of adding an additional protection by sending the message via Kumar to act on the mental and causal levels with the collective Higher Selves is very smart, and shows that time and thought have been put into these evolutionary strategies.
Last edited: Mar 25, 2019
Vibrate in accord with the universal notes​
​
I see it's time to change my signature message. Out with the old and in with the new! ​
Reactions: Pucksterguy and Lila

I googled Zul Movie, because I had a memory that Zul was mentioned in Ghostbusters. The movie character turned out to be Zuul, a negative alien that was trying to dominate and impact human society on Earth. To me, this is a form of predictive programming - putting the name right out there.

Another example is World of Warcraft (WOW): "Among the Zanchuli Council are many priests and mages of incredible power and forbidden knowledge. One of the most respected of these is Zul. Even as a child his dark and terrible visions had come true down to the last horrifying detail. He commanded fear and respect as one of the dark prophets: seers capable of witnessing great tragedies before they come to pass. This is a power referred to as the Sight, and Zul had a student named Vol'jamba who also had the Sight."
https://wow.gamepedia.com/Zul
Reactions: Pucksterguy, June and Lila

The genealogy soundex gives you a code that is the first letter, followed by a number for the next 3 letters. So both "zul" and "zuul" become "Z400". Soundex first deletes any duplicate consecutive letters.

FWIW, one source says there are only 1000 dracos on 3d earth, and a lot more short grays.
"When you censor a person you do not prove him a liar, you prove you fear what he has to say."
Reactions: Lila

therium said:
one source says there are only 1000 dracos on 3d earth, and a lot more short grays
Click to expand...

Thanks for the info, therium. My own personal story is that I believe I married one of these Draco souls (in a human body, obviously), and I had a years-long experience of malevolent narcissism, which only just ended last year with a complete cut of relations, and thus gave me the space to view it with greater hindsight. The problem for me was that I truly loved this human being, including his soul, and the sense of betrayal when I found out about his profound level of lies and covert activity dumped me into a descending vortex of depression which lasted approximately 6 years. Luckily my spiritual awareness saved me from going down the tubes, as I worked on forgiveness of the soul of this man. I still believe I am connected to him at higher levels, but he chose to help my evolution by taking on this negative role. Interestingly, he has past life memories of being a pirate, and trust me, piracy is not a pretty little comedy but perpetrated by ruthless, avenging, killers on the service-to-self path.
Reactions: Lila

I want to note that Simon Parkes recently answered a question someone wrote in, about Mantids, or Mantis beings. He says his soul is a hybrid between Reptilian and Mantis, which I have no problem with. I can see that in him. He says the home world of the Mantis beings is the Sombrero galaxy which is 30 million light years away. This photo was taken by one of our space probes in the year 2000. According to David Topi's article, the Mantis beings call themselves the Alimoss. I do understand and believe that they are one of the 4 intervening races (for good or bad, that is up to each to decide).

From various reports from contactees, it has been mentioned that Mantis beings are between 10 and 15 feet in height, and therefore quite imposing to people of our stature. They use hybrid bodies to appear on Earth in the physical, as they can't maintain their real bodies in our frequency. They are also aware that their appearance causes fear in our population, for any who have seen one of them in a paranormal state (meaning changed frequencies themselves to be able to perceive them).

For any who don't know, their Earth counterparts in the insect world are one of the most successful predators. They most certainly would instil fear and awe in any of their prey. 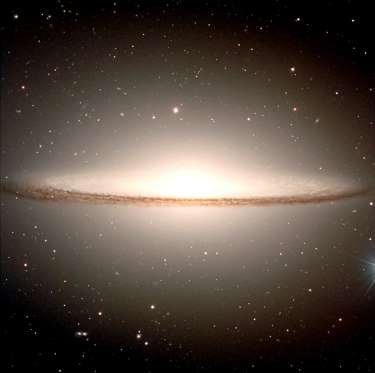 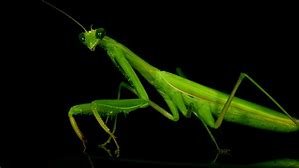 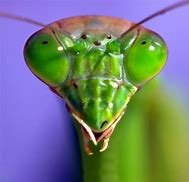 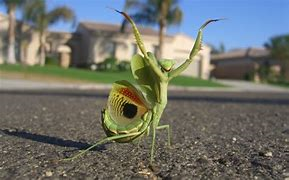 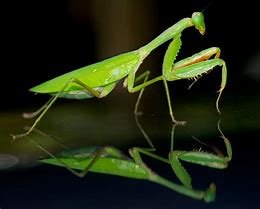 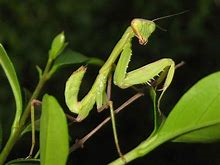 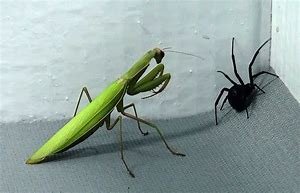 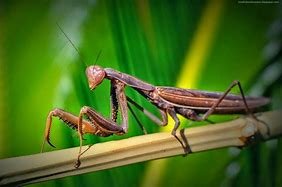 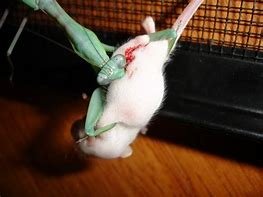 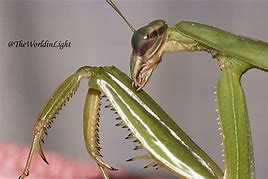 Some of the Earth-insect praying mantis attributes:

Can spread their weight on foot pads and walk on still water; are well camouflaged in greenery or they also can turn brown and be camouflaged amongst sticks; powerful mandibles; multiple eyes (common in insects); agile, jointed, hinged legs; hook-like grips; jointed jaw that can drop wide for large bites; can take on powerful adversaries like spiders or snakes; can leave an old, worn-out skin casing (like snakes) which is left behind in a cruel parody of this terrifying predator; they have six legs like other insects, and wings that can carry them a short distance. They hunt at night, or day, no problem.

As Earth was originally a paradise garden / library of living beings holding the living record of many races from the Universes, one wonders how accurate the insect version is to their Alimoss relatives.
Reactions: Linda and Lila

They can look remarkably like a stick until you pick up on the insect in the midst of the twigs!
Amazing ability to blend in.
Reactions: Linda

Had a pleasant visitation with one in a QHHT session. In the spring and summer little ones will show up outside on the table near my rocking chair. There are no plants there, so I figure they are just saying hi. Then I let them walk onto a piece of paper, move them to a plant, and they walk off the paper. I'm always startled by their appearance - those eyes!
Everybody all around the world - Gotta tell you what I just heard
There's gonna be a party all over the world
I got a message on the radio - But where it came from, I don't really know
And I heard these voices calling all over the world
Electric Light Orchestra
Reactions: Lila

Hailstones Melt said:
I googled Zul Movie, because I had a memory that Zul was mentioned in Ghostbusters. The movie character turned out to be Zuul, a negative alien that was trying to dominate and impact human society on Earth. To me, this is a form of predictive programming - putting the name right out there.

Another example is World of Warcraft (WOW): "Among the Zanchuli Council are many priests and mages of incredible power and forbidden knowledge. One of the most respected of these is Zul. Even as a child his dark and terrible visions had come true down to the last horrifying detail. He commanded fear and respect as one of the dark prophets: seers capable of witnessing great tragedies before they come to pass. This is a power referred to as the Sight, and Zul had a student named Vol'jamba who also had the Sight."
https://wow.gamepedia.com/Zul
Click to expand...

A bit other written in allods is the word zem. It is all that is liated with the tep cult which is no gentle one

Amos diggory of harry potter is another example of name similarity
Reactions: Lila and Hailstones Melt

Hey, I didn't know that one about Amos Diggory! That JK Rowling really knows some stuff, and inserts it expertly into her books.

The father of cederic who arrived where harry supposed to arrive alone on band 4
Reactions: Hailstones Melt and Lila

Hailstones Melt said:
According to David Topi's article, the Mantis beings call themselves the Alimoss.
Click to expand...

Another syncronicity appears! I just read about the Alimoss this week. My source said the Alimoss would include the Annunaki who are using this world for resources, human, plant and animal resources, and stripping earth like a giant corporation. That's why they want to reduce the human population, to more easily subjugate them. But they will not allow a nuclear war because this planet is their money-maker.
Reactions: Lila

Sorry, I think I got the names mixed up, don't want to misdirect. I went and re-read the article.