The main idea in these articles is that there are little used or understood powers available to a president during times of war. Are we in a state of war - seems like it to me. Did Trump declare a state of war - maybe obliquely when he compared the virus to the attacks on Pearl Harbor and the World Trade Center. He made that statement in May 2020, and I was taken aback because I knew that the USA declared war shortly after each attack.

Take a look at this next installment for some insights into what might be going on. One thing is for sure - we know SOMETHING is going on. 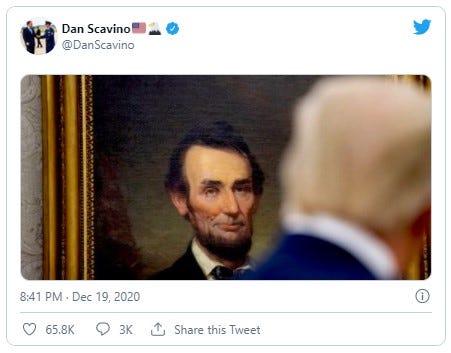 
When January 20th came and Trump boarded AF1 leaving Biden as the president, I was devastated. Everybody knew the election was fraudulent. There was no possible way Trump was just going to walk away from a stolen election. ​
​
Then he did.​
​
I honestly couldn’t comprehend what had happened. Like many of you, I could feel it in my bones that this couldn’t be how the story ends. I started searching for answers. The devolution theory was one of the only plausible scenarios I could see playing out but I always ran into the same question.​
​
Devolution isn’t meant to be permanent and certainly wouldn’t be able to last for 4 years. How does President Trump come back before 2024? ​
​
The reality is, I don’t think he ever “left”.​
Everybody all around the world - Gotta tell you what I just heard
There's gonna be a party all over the world
I got a message on the radio - But where it came from, I don't really know
And I heard these voices calling all over the world
Electric Light Orchestra
You must log in or register to reply here.
Share:
Facebook Reddit Pinterest Tumblr WhatsApp Email Link